MANILA – The Philippines and the United States signed an agreement Monday to allow a bigger US military presence on Filipino territory, hours ahead of a visit to Manila by US President Barack Obama.

Philippine Defense Minister Voltaire Gazmin and US ambassador Philip Goldberg signed the 10-year pact, which is seen as another element of Obama’s effort to focus US military and economic attention more heavily on Asia.

Obama said the deal would see more US troops rotate through the Philippines for joint military training exercises, but emphasized there would be no return of permanent American bases.

“Greater cooperation between American and Filipino forces would enhance our ability to train, exercise, and operate with each other and respond even faster to a range of challenges,” Obama said in a written response to questions by local television network ABS-CBN ahead of his visit.

Both panels had been working on the agreement since August last year and had eight meetings before the deal was signed.

The deal announced on Monday is only a framework agreement, with the details — such as how many US troops will rotate through the Philippines and when — to be negotiated and announced later.

Although the Philippine panel vowed transparency in the negotiations, it has yet to reveal the entire contents the document. Speculations say that it will be released as Obama arrives in the country.

“The document we signed not only manifests the deepened relationship between the Philippines and the United States but equally serve as a framework for furthering our alliance as encapsulated in the title Enhanced Defense Cooperation,” Gazmin said in his speech.

“This agreement allows us to work on what is called for under the MDT which is the involvement of individual and collective capacities and sustainability to undertake what is possible under the Visiting Forces Agreement which are training and exercises,” he said further.

Obama was due to arrive in the Philippines from Malaysia on Monday afternoon for a two-day visit, the final leg of an Asian trip that also took him to Japan and South Korea. 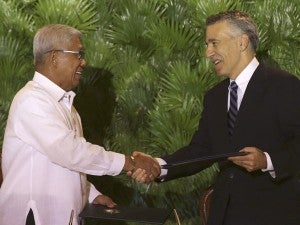 Philippine Defense Secretary Voltaire Gazmin, left, shakes hands with U.S. Ambassador Philip Goldberg after signing the Enhanced Defense Cooperation Agreement at Camp Aguinaldo, Philippine military headquarters in suburban Quezon city, north of Manila, Philippines on Monday, April 28, 2014. The U.S. military will have greater access to bases across the Philippines under the new 10-year agreement signed Monday in conjunction with President Barack Obama’s visit and seen as an effort by Washington to counter Chinese aggression in the region. AP

The United States and the Philippines are already long-time allies bound by a mutual defense pact, and engage in regular war games that see thousands of US troops and state-of-the-art American military hardware brought to the Philippines.

The Philippines had been eager for an agreement to expand the arrangement to boost its weak military capabilities and emphasize its close ties to the United States, at a time of deep tensions with China over competing claims to parts of the South China Sea.

China claims most of the South China Sea, even waters close to the Philippines and other countries in the region.

Brunei, Malaysia and Vietnam, as well as Taiwan, also have overlapping claims to the sea.

As tensions over the South China Sea have heated up, the United States has sought to strike a balanced strategy by seeking to reassure its allies in Asia while emphasizing to China it takes no sides on the dispute.

In his comments to ABS-CBN, Obama again emphasized the United States remained deeply committed to supporting the Philippines, a former US colony, referring to the two nations’ 1951 mutual defense treaty.

“We’ve pledged ourselves to our common defense for more than six decades. Our treaty obligations are iron-clad,” Obama said.

“The United States stands by its allies, in good times and in bad. In fact, one of the main purposes of my visit will be to reaffirm our treaty commitments to the Philippines and to make it clear that just as we’ve relied on each other in the past, we can count on each other today.”

Nevertheless, the mutual defense pact does not specifically state that the United States must come to the Philippines’ defense over remote islets and reefs in the South China Sea.

Obama made no mention of the hotspots when referring to the mutual defense pact, but did again call on China to not use intimidatory tactics to assert its claims.

“I’ve been clear and consistent in stressing that the United States and China need to support efforts among claimants to peacefully manage and resolve maritime and territorial issue through dialogue, not intimidation, including in the South China Sea,” the US leader said.

Obama said the deal would give US forces “greater access to Filipino facilities, airfields and ports, which would remain under the control of the Philippines”.

“US forces would not be based in the Philippines. Instead, they would rotate through for joint training and exercises, as some US forces already do.”

Goldberg, meanwhile, reiterated that the agreement will not reopen US bases here, but rather “enhance our defense relationship.”

He said in his speech “there is more we can do together to support the alliance and to promote peace and security in the region.”

The agreement, Goldberg said, will “increase training opportunities” for both countries that will improve interoperability and the ability to respond to humanitarian crisis.

Filipino officials have previously said the deal would also allow the United States to store equipment that could be used to mobilize American forces faster — particularly in cases of natural disasters.

The Philippines hosted two of the largest overseas US military bases until 1992, when the Filipino Senate voted to end their lease amid growing anti-US sentiment.

Philippine President Benigno Aquino has led a warm re-embrace of the United States in recent years, insisting that greater US military support is needed to fend off China’s actions.