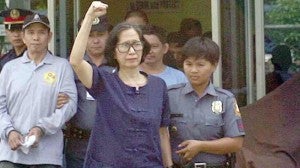 SAN FERNANDO, Cebu—After more than an hour of searching, the police on Tuesday failed to find a single firearm in the safe house of couple Benito and Wilma Tiamzon, chair and finance chief of the Communist Party of the Philippines (CPP), respectively, in Barangay (village) Sangat here, about 28 kilometers south of Cebu City.

The couple were arrested last Saturday in Aloguinsan town.

Senior Supt. Ritchie Posadas, Criminal Investigation and Detection Group in Central Visayas (CIDG-7) chief, said there were indications that the occupants left the house in haste.

He said the pieces of furniture were in disarray while the cabinets were left open, with some clothes on the floor. There were also some empty cartons in the house.

At least 15 policemen from CIDG-7 and police intelligence unit raided the rented house of the Tiamzons to look for firearms, ammunition and explosives.

Except for three dogs, the house was empty when the raiding team arrived at 5:15 p.m.

Barangay (village) Sangat Captain Ramy Sasoma was asked to witness the raid, which was conducted on the basis of a search warrant issued by Judge Soliver Peras of the Regional Trial Court in Cebu City.

But after more than an hour, the raiding team didn’t find any firearm and decided to pull out past 7 p.m.

The raid took place three days after the couple were arrested at a police checkpoint in Barangay Zaragosa, Aloguinsan, 60 km southwest of Cebu City.

The one-story bungalow sits on a 1,600-square-meter lot. Behind the house are two nipa huts. The property had been rented by the Tiamzon since Jan. 8, 2013, from Jani Sabellano.

The bungalow in Sitio (subvillage) Bolok-Bolok reportedly served as the safe house of the Tiamzon couple for over a year.

A neighbor of the Tiamzons, who declined to be named, told the Inquirer that the couple and six others moved into the house in January 2013.

She said her neighbors were quiet and rarely mingled with them.

The house’s gardener, who identified herself as “Nang Ester,” told the Inquirer that she had seen the Tiamzon couple only a few times.

“They let me eat lunch but I seldom see them go out,” Nang Ester said.

The bungalow, according to Nang Ester, is owned by the Sabellano family now residing in Talisay City. The family had the house rented for P15,000 a month.

Nang Ester said the first occupants of the house were six people—three women and three men.

The Inquirer showed Nang Ester a photo of the Tiamzons and she confirmed that they were the couple she rarely saw at the house.

She said the Tiamzons had two companions she knew as “John-John” and “Nona.” Nona is a doctor and John-John works in an office, according to Nang Ester.

A certain Nona Castillo was among the five people who were arrested along with the Tiamzons. The military described the five as the couple’s “staff personnel.”

Another neighbor said he saw a gray Toyota Revo enter the compound on Sunday morning at 10 a.m. It left at past 10:30 a.m.

“I didn’t know they were NPA (New People’s Army),” he told the Inquirer. The NPA is the military arm of the CPP.

There are four nipa huts on the property. According to a military source, three of the huts were used by the six other companions of the Tiamzons, while the couple stayed in the main house.

Military in Negros, Panay go on alert for NPA anniversary