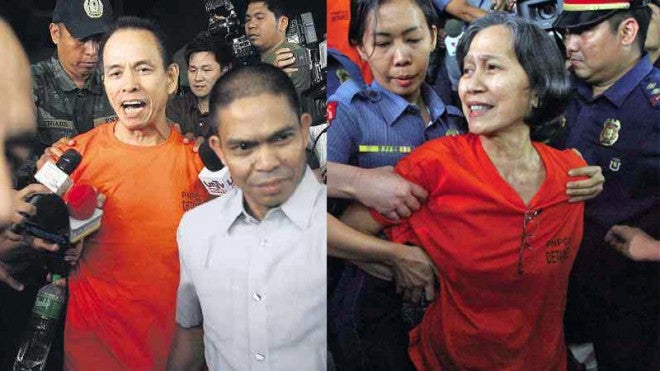 TOP REDS Communist Party of the Philippines and New People’s Army chief Benito Tiamzon (left) and his wife, Wilma (right), shout slogans after an inquest conducted by the Department of Justice at Camp Crame. PHOTOS BY MARIANNE BERMUDEZ

Lawyers of Benito Tiamzon and his wife, Wilma, denied Monday that the two communist leaders were in possession of firearms and explosives when they were arrested in Cebu province last Saturday.

“They had three puppies and four cats in their vehicle when they were arrested. Our question is, ‘How did the cats and puppies become firearms and explosives?’” lawyer Rachelle Pastores told reporters.

“In the first place, the police already conducted an inventory after the arrest in Cebu, but they did not include the firearms, explosives and ammunition supposedly seized from (the Tiamzons),” Pastores added.

Pastores and another lawyer walked out of the inquest proceeding of the criminal case the police filed against the couple, claiming the process presided over by government prosecutors in Camp Crame in Quezon City was invalid.

Edre Olalia dismissed as an “afterthought” the case for illegal possession of firearms and explosives that the Criminal Investigation and Detection Group (CIDG) filed against the Tiamzons and their five companions.

“This case was just filed (on Monday) as an afterthought to justify their continued detention, particularly against the five persons who just happened to be with the Tiamzons at the time of the arrest,” Olalia told the Inquirer.

The lawyer also accused the police of “planting” the four handguns, two grenades and several rounds of ammunition allegedly seized from the group.

“If they were really captured with those firearms, why didn’t the police seek their inquest in Cebu after they were arrested on Saturday? Why did they fail to present and include in their report the guns and explosives supposedly confiscated from the group?” Olalia asked.

“They know they did not have a case, especially against the five. That’s why they rushed to file the case.”

The military said Tiamzon, 63, is the chair of the Communist Party of the Philippines (CPP), which has been waging one of the longest-running Maoist insurgencies in the world, while his wife is the head of its finance committee.

Tiamzon is also said to be the head of the CPP’s armed wing, the New People’s Army (NPA).

The couple were arrested by police and military personnel around 3 p.m. on Saturday in Barangay (village) Zaragosa, Aloguinsan town, along with five others—Nona Castillo, Joel Enano, Arlene Panea, Rex Villaflor and Jeosi Nepa.

The military initially described the five as members of the CPP’s central committee, but later said they were actually “staff personnel” of the Tiamzons.

Pastores said the couple’s lawyers were not informed by the CIDG that their clients would undergo inquest proceeding on Monday when they visited them at the Philippine National Police Custodial Center in Camp Crame on Sunday.

“We decided to leave the proceeding because it was highly irregular. We will not participate in a questionable process. We will not recognize this process,” Pastores told reporters.

Pastores also questioned the authority of the Department of Justice (DOJ) prosecutors who handled the proceeding, saying they had no jurisdiction over the case since the offense allegedly committed happened in Cebu.

“The inquest proceeding is held immediately after a person is arrested. But this case was filed belatedly, beyond the allowable 36-hour period within which authorities should file a case against individuals arrested without warrant,” Pastores told reporters.

“Unless there is a court order, DOJ prosecutors cannot just change the venue of the inquest. The lawyers were not informed that there would be an inquest against our clients,” she said.

No warrants for five

Pastores noted that only the Tiamzons were the subject of the warrant that the military and police used in arresting them and not the five other individuals.

She said they raised their opposition with the DOJ panel of prosecutors, headed by Assistant State Prosecutor Niven Canlapan, but they “unilaterally” continued with the proceeding held on the second floor of the PNP multipurpose building in Camp Crame.

“If the (CIDG) insists that there is a valid case for illegal possession of firearms, we will hold the police officers who presented these alleged illegal firearms liable criminally and administratively,” she said.

“As far as we are concerned, the police presented nothing but pieces of planted evidence.”

Sought for comment, Senior Supt. Roberto Fajardo, chief of the CIDG National Capital Region, played down Olalia’s claims, saying it was natural for the lawyers to defend their clients.

“It’s part of their defense. As DOJ prosecutors, they have the authority to conduct inquest proceedings anywhere. But the trial will be held in Cebu,” Fajardo said.

The husband and wife, tagged by the military as the “power couple” of the communist insurgency, remained defiant even after their arrest.

“Tuloy ang laban (The fight continues),” shouted Tiamzon as he was led by policemen out of a building in Camp Crame where he and Wilma were presented to government prosecutors.

In an orange prison shirt with his hands cuffed behind his back, Tiamzon appeared calm as members of the media mobbed him before he was escorted to a waiting PNP bus.

Wilma, who looked frail and weak, took the chance to extend her congratulations to the NPA, which will celebrate its 45th founding anniversary on March 29.

“The NPA is continuing to gain strength nationwide. The AFP (Armed Forces of the Philippines) will never defeat the NPA,” she said in Filipino.

In a handwritten statement in Filipino, the Tiamzon couple demanded their “immediate release from illegal and unjustified arrest.”

They insisted that they were covered by the Joint Agreement on Security and Immunity Guarantees (Jasig).

“NDF (National Democratic Front) consultants like us play an important role in the peace negotiations. (Government chief negotiator) Alex Padilla should not claim that NDF consultants cannot carry out their role just because they have returned underground,” the couple said in a statement read by Cristina Palabay, secretary general of the human rights group Karapatan.

Pastores maintained that the Tiamzons were covered by Jasig, which the peace panels of the government and the NDF, the CPP’s political arm, signed in 1995.

In fact, she said the couple both presented their safe conduct pass when police accosted them, but the arresting officers allegedly ignored and confiscated the cards.

“The cards had not been returned to them,” she said.

Justice Secretary Leila de Lima said the Tiamzons could not invoke immunity guarantees because there was no validation that they were covered by Jasig.

Even if the couple were covered, the Jasig could not be implemented because of the stalled peace talks, De Lima said.

She said the police and military did right in arresting the couple because they were covered with outstanding and valid arrest warrants for two cases.

These included murder and frustrated murder charges filed against them in Northern Samar as well as multiple murder charges, this time involving the discovery of mass grave sites of communist members allegedly purged in the ’80s.

Speaking to reporters, the justice secretary said that there was “failed verification” on the part of the government peace panel that checked whether the Tiamzons were indeed covered by Jasig.

“Even then, assuming arguendo, that they are indeed Jasig-covered, they cannot invoke … safety and immunity guarantees because (the Jasig mechanism) presupposes the existence of  peace negotiations and we all know that the peace negotiations have not yet resumed,” De Lima said.

She added that Jasig does not shield those facing a criminal case.

“The Jasig mechanism I suppose is not meant to undermine the criminal justice system.”

She said the arrest warrants of the Tiamzons had not been nullified and went through the right process. “(S)o it can be implemented.”

Jalandoni: We have a deep bench; trained cadres to replace Tiamzon