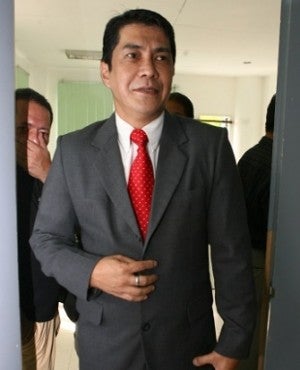 TV5 News anchor Erwin Tulfo on Monday filed a libel case in the Quezon City Prosecutor’s Office against the Philippine Daily Inquirer, seeking P12 million in damages for reporting that he allegedly benefited from the diversion of congressional pork barrel funds, through a state agency, to dubious nongovernment organizations (NGOs).

In the March 19 report, the newspaper named Tulfo and another radio news anchor as recipients of allocations in the Priority Development Assistance Fund (PDAF) coursed through the National Agribusiness Corp (Nabcor) and subsequently to NGOs.

The report was based on documents provided by former Nabcor officials Rhodora Mendoza and Vicente Cacal to the Office of the Ombudsman claiming that 83 lawmakers instructed Nabcor, an agency attached to the Department of Agriculture (DA), to release P1.7 billion from the PDAF to questionable NGOs, including those controlled by Janet Lim-Napoles.

Speaking to reporters, Tulfo said that in filing the libel case he wanted to clear up things. He confirmed that he received in 2009 a check for P245,535 but that this was payment of the premiums for 3-minute advertisements on his 2-hour program then aired over DZXL-Radio Mindanao Network (RMN). He said there was nothing illegal in the transaction.

He said that as a radio broadcaster then, the 3-minute commercials were for the DA and not specifically for Nabcor.

“Maybe it was misinterpreted by the paper. The whistle-blowers had to come up with something new, something that has not been said before, to be part of the witness protection program so maybe that is why they implicated mediamen,” Tulfo said.

He added that he was inclined to forgive and forget if the newspaper makes the proper rectification of the March 19 article, “Payoffs to Media Bared.”

“It is very damaging to my integrity. It is very important for my name to be cleared. My credibility and integrity as a media practitioner depends on it,” Tulfo stressed.

In his four-page complaint, Tulfo claimed that there was deviation in the facts and that the article, which branded a legitimate deal as a “payoff,” made it appear that the transaction, evidenced by an advertising contract, vouchers and a check, was illegal.

Tulfo said: “The word or phrase used by news reporter Nancy C. Carvajal in her item as ‘in the guise of advertising expenses’ is a mere conclusion of facts and a complete departure from the accompanying documents. Thus, it falsely and maliciously conveyed to the minds of the readers that I acquired and got (sic) benefited from the people’s money known as the PDAF through fraudulent transaction while I was then serving as a radio broadcaster of DZXL-RMN from 2006 to 2009.”

He further claimed, “To add insult to injury, my name is being dragged and carried out (sic) by other media and social networking services which implicated Ms. Janet Lim-Napoles and other government officials.”

Tulfo maintained that the assertions against him in the article were “baseless, damaging and products of an irresponsible reporting with prejudiced mind.” He claimed that the article maliciously imputed to him a crime and a circumstance causing him dishonor, discredit or contempt as a prominent TV news anchor and radio broadcaster as well as mental anguish, sleepless nights and public ridicule.

He said that for the alleged damage to his reputation and emotional distress caused by the article, he was entitled to a P12 million compensation.