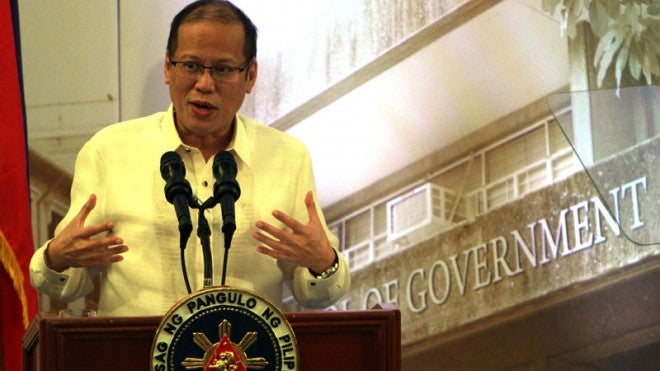 MANILA, Philippines—President Aquino on Monday said the arrest of Benito Tiamzon and his wife, Wilma, dealt a “serious blow” to the communist movement but left the door open for the resumption of peace talks with the National Democratic Front of the Philippines (NDFP).

“Does it (arrest) have an impact [on the peace process]? I don’t think so. It really depends on their willingness to go back to the bargaining table,” the President told reporters, referring to the NDFP, the political arm of the Communist Party of the Philippines (CPP).

Tiamzon chairs the CPP and heads its armed wing, the New People’s Army (NPA), and his wife is the party secretary general. They were arrested on Saturday in Zaragosa, Aloguinsan town, 60 kilometers southwest of Cebu City, along with five others whom the military described as the couple’s “staff personnel.”

They are now detained in Camp Crame in Quezon City.

Aquino said it was the NDFP panel that “walked out” of the negotiations more than a year ago.

He acknowledged that the arrest of the Tiamzons was the one he hinted at last week when he mentioned the impending capture of other high-profile fugitives.

“It wasn’t a surprise because I did mention it,” the President said in an ambush interview after he led the oath-taking of officials of four business organizations in Malacañang.

“I believe it does deliver a serious blow. And it shows you also the competency of our security forces,” Aquino added.

The communist guerrillas have been waging war against the government for the past 45 years, considered the world’s longest-running Maoist-inspired rebellion.

Despite the dwindling number of its armed combatants, arrests and deaths of its top leaders over the years, the military said the communist insurgency remained a “potent challenge” to the peace and stability of the government.

Exiled CPP founder Jose Ma. Sison downplayed the optimism of the administration that the arrests would demoralize the communist movement and that the Maoist-inspired rebellion would eventually die down.

“To use basketball parlance, I say that the CPP has a deep bench. Benny Tiamzon and Wilma Austria will be replaced automatically by comrades,” said Sison, now based in The Netherlands.

In a statement, the CPP said Tiamzon and his wife were “performing tasks and duties assigned to them” both by the party and the NDFP at the time they were arrested.

“Up to recently, both were busy conducting firsthand investigation into the conditions of the working-class people in the Visayas region whose lives were devastated by Super Typhoon Yolanda and who continue to suffer from the Aquino regime’s antipeople, crony-controlled, corrupt and grossly inept response to the calamity,” it said.

The CPP maintained that the Tiamzons were “peace consultants” of the NDFP and their arrest would “further imperil peace negotiations.”

The President hit back, saying: “When they were arrested, the report that I read in the papers said, talks of hand grenades and pistols being in their possession, something which normally does not occupy the belongings of a peace negotiator.” (A lawyer of the Tiamzons claims that the couple were carrying puppies and kittens, and not guns.)

Aquino appeared unfazed by the possibility of more NPA attacks in response to the arrest of the top communist leaders.

“The attacks have not ceased, so what are they saying? For them, it’s business as usual, I guess,” he said.

Asked if the capture of the Tiamzons would bring the government closer to stamping out the communist insurgency, the President cited the need to “deal with the root causes of the problem.”

“And of course, that’s why we are focused on empowering our people, especially in trying to move them out of poverty [through] the various interventions that we have been doing from education, to health, to livelihood, to housing, to disaster preparedness and so on and so forth,” he said.

Bello, now 1BAP party-list representative, said the administration was in a position of strength and was “holding the aces” with the arrest of the Tiamzon couple.

“With the arrest of the two top ranking officers, [the government] would be going to the peace process from a position of strength. They should be pursuing the talks from this stance,” he said in a phone interview.

The NDFP had been engaged in peace negotiations with the government the past 27 years, starting with the administration of Corazon Aquino.

Bello, a former justice secretary, said the peace panel could use back-channel talks or come up with more creative ways to reach out to the communist group.

“There are ways to resume the talks. A little imagination is necessary. I’m sure Chairman Alex Padilla (of the government panel) knows how to do it,” he added.

Bello said there would be a temporary setback because the NDFP would demand the Tiamzons’ release and the government was expected to say no.

But he said even this matter could be tackled during peace negotiations. “They don’t have to resolve it immediately. What’s important is they start talking.”

Bello said he could no longer recall whether he signed the “letters of acknowledgment” that the Tiamzons were supposedly carrying and which stated they were entitled to safety and immunity guarantees under the Joint Agreement on Safety and Immunity Guarantees (Jasig).

“My recollection is Ms. Wilma Tiamzon was one of those names submitted by the NDF panel when we first received a list from them,” he added.

Give peace a chance

Sison hoped that the government would still give peace a chance and called on Aquino to respect The Hague Joint Declaration and Jasig, and release the detained NDFP peace consultants, including the Tiamzon couple.

“Thus, there will be a sound basis for resuming the peace negotiations,” said Sison, a peace consultant to the NDFP.

Sison maintained the peace negotiations were paralyzed by the current Aquino administration’s noncompliance with and violations of existing agreements signed by both parties.

“The imprisonment of Jasig-protected consultants has had adverse consequences to the peace negotiations,” he said.

Read Next
Zamboanga City bayfront ‘a death zone’
EDITORS' PICK
294 areas in NCR under granular lockdown — PNP
Smart reaffirms 5G leadership as PH’s most reliable 5G mobile operator
4 essentials for overcoming data protection challenges in the New Normal
Gordon to Pharmally’s Mago: Show up or be a fugitive
Pharmally’s Mago no longer in her condo unit — Gordon
Huawei’s relentless mission to bring ultimate health and wellness tracking for your fitness goals
MOST READ
Senators secure Pharmally exec offering to turn witness
Carlo Aquino reveals he almost starred in hit Korean series ‘Squid Game’
‘If it goes to Malacañang, so be it’: Lacson vows to follow evidence in Pharmally probe
Typhoon Lannie likely to intensify on Monday
Don't miss out on the latest news and information.