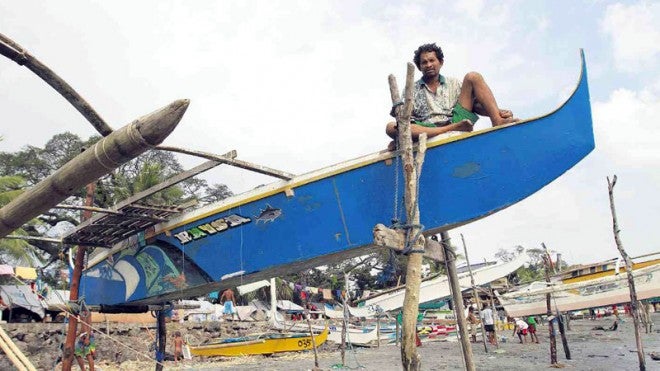 HIGH AND DRY. Badjao fisherman Sani Hadjani inspects his wooden boat near the Badjao evacuation center in Barangay San Jose-Cawa-Cawa, Zamboanga City. Hadjani lost his 5-year-old daughter early this month to an intestinal disease, one of many ailments that stalk the evacuees who are constantly exposed to the elements and still homeless six months after the Moro National Liberation Front’s siege of the city. EDWIN BACASMAS

ZAMBOANGA CITY—Sani Hadjani remembers his 5-year-old daughter as a happy child running around on bayfront Roseller T. Lim Boulevard—once a place for lovers to watch sunsets but is now a squalid encampment for sea gypsies known as Badjaos.

They are among 116,000 people of various ethnic groups who fled coastal villages burned during the three-week “Zamboanga siege” and built huts along the promenade, the traffic island and the sidewalk across it.

Vehicles careen on the busy four-lane road in the area known as Cawa-Cawa. It is now home for the Badjaos numbering 4,300 in 850 families. Their children play or swim on the beach, where the people uprooted by the fighting in September between government forces and Moro rebels also relieve themselves.

There is no sanitation in the colony of blue and white plastic sheets provided by the United Nations High Commissioner for Refugees (UNHCR) and the International Organization for Migration (IOM) in the aftermath of the fighting. The tarpaulins are now worn out and tattered.

One bladder water tank with a capacity to supply the needs of 70 families services the entire community. There is a mad scramble whenever the tank is replenished, tying up traffic on the road.

From the beach, naked kids with runny noses dash to their huts on the traffic island, or on the sidewalk on the other side, adroitly eluding onrushing cars like matadors in a bullring.

But the killers are pneumonia, diarrhea, malnutrition, respiratory infection, dengue, tuberculosis, leptospirosis and other deadly diseases associated with being exposed to the elements—the scorching sun at daytime and evenings fanned by a cold breeze from the sea.

The father of eight children talked to a police officer stationed at the privately run Brent Hospital, a whitewashed stone edifice just across from his hut on the traffic island. An ambulance was summoned to ferry the stricken child to the government hospital several kilometers away in the city center.

There, the girl was given medicine to get rid of worms in her belly, arrest diarrhea and bring down a high fever.

“She took the pills but she stopped eating,” said Hadjani.

After five days, the daughter turned pale and gave the father blank stares. She went into a state of delirium in the evening.  Alarmed, Hadjani again asked the officer to call an ambulance. He took her again to the city hospital, where the girl was pronounced dead.

The death of Dolina Hajani last week breached the 100th mortality mark in the evacuation centers for internally displaced people, or IDPs, the UN term applied to those uprooted by civil strife—like the Badjaos, the Tausugs, the Samals and other Christians and Muslims driven from their homes by the September violence that razed 10,000 houses.

The toll of lives in the camps has exceeded the 12 civilian fatalities recorded during the 23-day standoff. The rising death count has alarmed a UNHCR-led cluster assisting local authorities, pointing out the government has a responsibility under the United Nations guiding principles protecting IDPs and allowing voluntary returns to their original habitat now that the emergency had passed.

Conditions at the nearby evacuation center at the Joaquin F. Enriquez Memorial Sports Complex are far worse than in Cawa-Cawa.

“This is a death zone,” said Munib Kahal, 37, a volunteer aid worker at the stadium.

There is little sanitation in the sports complex, occupied by 13,300 people in 2,300 families. Each of the 47 portable toilets scattered in the facility is supposed to service 20 but is used by more than 100 people. It takes two weeks to clean up the septic tanks instead of two days. During a rain, floods carry the waste to the tents on the ground.

The youngest and the oldest suffer from suffocation, heat stroke and hypertension in the sweltering box-like blue plastic shelters in the bleacher sections of the stadium.

The same condition prevails on the rubberized tennis courts, where it is superhot at daytime and super-cold at night. Here, pneumonia and fever are common ailments.

Dr. Rodel Agbulos, the city health officer, says doctors, nurses and ambulances have been deployed in the evacuation centers and a mini-hospital operates 24 hours a day at the grandstand in the sports center.

“This really would not prevent mortalities,” he said. “We really have to decongest the area.”

Agbulos says compounding the problem is culture and tradition. The minority groups rely on folk healers, he says.

As for Dolina, the doctor runs a finger through his hair and outlines arrangements with Brent Hospital.

“We answer all the needs. We pay for the lab and everything. It’s more on the health-seeking behavior. Sometimes, they feel, it’s still OK. It’s not that bad,” he said.

Aid workers say relocation efforts have stalled although President Aquino in January approved a P2.7-billion shelter program that the National Housing Authority is supposed to carry out.

Land problems and bureaucratic procedures are hobbling the effort, says Bagian-Aleyesa Abdulkarim, 57, a sociology professor and technical consultant in the project.

“Maybe it’s because they’re Muslims. If they’re Christians, they would probably be out of the evacuation centers now,” said the Maguindanaoan from Cotabato. “That’s the feeling of the IDPs.”

Munib Kahal, a Tausug who belongs to a group of Muslim elders and religious leaders, scoffs at such talk. “Zamboanga as a whole is not prepared for this kind of tragedy,” he said.

‘My house was burned’

Mayor Maria Isabelle Climaco-Salazar says she is also upset at the delays in the NHA’s rebuilding program.

“I was also a victim. My house was also burned,” she said, referring to her residence at Barangay Santa Maria that was among the nine villages razed.

“I hold the MNLF accountable not only for the deaths during the siege, but also for the deaths that will happen. They have displaced their own kind, Muslims, Christians and Lumads,” she said. “The ones that caused the problems were not Christians. They were privileged Muslim intellectuals and leaders.”

She said Zamboanga, a Christian enclave in a Muslim region whose people proclaim they were placed under Spanish and American colonizers, had opened its arms to the tribal groups that had fled violence in the southwestern islands, a region rich in minerals and rubber but is one of the most impoverished in the country.

Salazar points to waves of migrations in 1974, when then President Ferdinand Marcos went on a firearms collection drive following the imposition of martial law and the MNLF leader, Nur Misuari, a political science professor, unified the various tribal groups for the first time and waged war on Manila, and again in 1974, when the MNLF burned the Jolo capital.

“Zamboanga became home to them,” she said. The resources of the local and national governments, along with those from the international community, have been mobilized to deal with the crisis, she said.

Food assistance that included fried chicken at the outset and later sardines and noodles has come to a trickle.

Like most of the displaced, Sani Hadjani dreads the end of the food-for-work project of the World Food Programme and the Community and Family Services International, where IDPs are given a 50-kilo sack of rice for cleaning jobs on the streets.

As a boy, the 48-year-old Hadjani fled violence in his Siasi hometown in Tawi-Tawi in the 1970s, with 20 other Badjao families. He managed to buy a motorized boat—a treasured possession of a Badjao—three years ago, but its engine had broken down. He shows off the broken engine covered with blanket, caressing it as he points to the parts that needed repairs.

Hadjani considers himself wealthy before the siege. He and his three-member crew used to bring home at least P20,000 from three-day fishing expeditions. He had managed to build a wooden house on stilts with a roof of GI sheets, unlike his neighbors’ thatch and bamboo dwellings in the water off Rio Hondo.

He says he had been able to buy gold jewelry for his wife and other precious household stuff. The wife, her front teeth missing, proudly shows pots and pans to a reporter, as a man carrying a meter-long barracuda caught in the sea, walks along the boulevard, site of the Carmelite monastery where President Aquino went on a retreat to meditate before he decided to run for president in 2010. Aquino was in Zamboanga for 10 days during the siege.

Hadjani, with bronze skin and streaks of white in his curly hair, is now down and out. He sends a teenaged daughter and two younger kids to beg in the streets downtown. At the end of the day, they bring home at least P50 to help buy food to feed the family.

He longs to go back home to Rio Hondo, and out to the sea again.

PART 1 OF THE SERIES