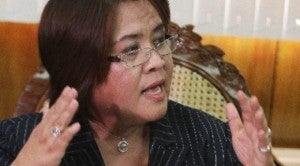 MANILA, Philippines—It was not only broadcasters Erwin Tulfo and Carmelo del Prado who got funds with “questionable releases” from the National Agribusiness Corp. (Nabcor).

Justice Secretary Leila De Lima, who had a “long talk” with former Nabcor officials Rhodora Mendoza and Victor Cacal at the Department of Justice (DOJ) on Tuesday, disclosed Tuesday night that there were more “media consultants” who were also involved.

De Lima said the two Nabcor officials did not say how many these media consultants were but they will review their records “for the names.”

“Actually, it’s not only the two that were mentioned. They have to review the records for the names but they did not say how many they are talking about but they said there are others other than the two already named,” she said, in reference to Tulfo and Del Prado.

Mendoza and Cacal had said in affidavits submitted to the Office of the Ombudsman that Tulfo and Magdurulang received payoffs in the form of “advertising expenses” from pork funds that legislators channeled to phantom projects through the state-owned company from 2007 to 2009.

De Lima said the two Nabcor officials clarified that the funds given to Tulfo and Del Prado were not from the Priority Development Assistance Fund (PDAF) but came from the Barangay Food Terminal (BFT) project implemented by the agency.

She said the two officials told her that the release of BFT funds “to certain media consultants” was one of the anomalous transactions they observed in nine projects of the agency.

“They are not really sure whether these are for advertising projects—either media consultancy or advertising costs. But they said this should undergo bidding and then supposedly a memorandum of agreement was executed…but there were requirements that were not complied with so that would be part of the inquiry,” she said.

She said the two officials would detail their statements in their affidavits and mention that the fund releases to the media consultants were made in the absence of a public bidding and lack of requirements.

De Lima said the media consultancy was supposed to “be the subject of a bidding. This does not fall under the bidding exception….”

De Lima said she would refer the affidavits that Mendoza and Cacal will execute on the questionable fund releases on the nine projects, including the BFT, to the National Bureau of Investigation (NBI) for preliminary investigation.

Asked on the possible liabilities of media members who received the funds with questionable releases, she said they would still have to look into this.

De Lima said Mendoza and Cacal were “willing to execute affidavits in relation to those projects” and prove their allegations “based on their personal and direct knowledge and documentary evidence.”

Levi Baligod, the lawyer for the two former Nabcor officials, on Tuesday said his clients would “eventually” execute affidavits against Tulfo and Del Prado.

Baligod was at the DOJ where he submitted to De Lima four affidavits of Nabcor officials that he said could lead to the filing of plunder charges against Nabcor and Department of Agriculture (DOA) officials for the misuse of P300-million funds of the Ginintuang Masagang Ani (GMA) program.

Speaking to reporters after meeting with De Lima, Baligod said the Nabcor funds released to Tulfo and Del Prado came from the BFT and not pork barrel funds.

Baligod said he saw the checks released in the name of the two broadcast journalists and the release of the funds to them were “irregular.”

“At the time of the release of the checks, there were no supporting documents and there was a notation in the disbursement voucher. There were documents that were lacking, like certificate of performance. So why should they be paid?” Baligod told reporters.—With Tetch Torres-Tupas, INQUIRER.net