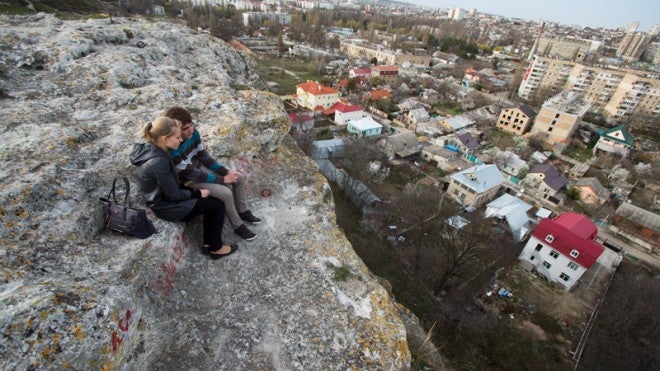 A young couple watches at the town from a hill in Simferopol, Crimea, Tuesday, March 25, 2014. The self-proclaimed leader of the Crimean port city of Sevastopol on Tuesday disbanded its pro-Russian militia and called on them to disarm according to Russian law. AP PHOTO/PAVEL GOLOVKIN

SEVASTOPOL, Crimea—The self-proclaimed leader of the Crimean port city of Sevastopol on Tuesday disbanded its pro-Russian militia and called on them to disarm according to Russian law.

Alexey Chaly, who has been in charge of the city for about a month, signed a decree to disband the “functions of people’s militia units” which said they were “no longer useful.”

“The revolution is over,” Chaly said in a televised address directed at militia commanders.

“We are starting to live according to Russian laws with the relevant consequences for illegal actions.”

Some of the commanders are opposed to the move, however, and plan to stage a protest against it on Wednesday.

“Chaly didn’t even say thank you,” one of them, Vladimir Tyunin, told AFP. “He is trying to rule this city single-handedly.”

Chaly, a vehemently pro-Russian politician, was proclaimed Sevastopol’s mayor at the end of February by people at a rally in support of calls for the city—home to Russia’s Black Sea fleet since the time of the tsars—to join Russia.

At the time, the city’s new authorities under Chaly had called on citizens to join a “self-defence” militia, which then took part in the seizure of Ukrainian military bases and ships together with Russian troops.