Military in Negros, Panay go on alert for NPA anniversary 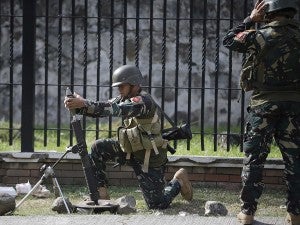 ILOILO CITY, Philippines — Government troops in Negros and Panay provinces are on heightened alert following the arrest of top communist rebel leaders Benito Tiamzon and Wilma Austria, and in anticipation of the coming founding anniversary of the New People’s Army (NPA).

“We are always on alert against threats by lawless elements. We are more cautious during their anniversary,” said Major Ray Tiongson, spokesperson of the Army’s 3rd Infantry Division.

The 3ID has seven battalions deployed to Panay and Negros Island.

The NPA, armed wing of the Communist Party of the Philippines (CPP), will commemorate its 45th founding anniversary on March 29.

Tiongson said the government troops’ priority would be to prevent attacks and protect civilians in areas of rebel concentration.

“They will take advantage of any opportunity for them to inflict casualties on government troops,” he said.