BAGUIO CITY, Philippines – Uphold the Honor Code even after you leave the Philippine Military Academy (PMA), President Benigno Aquino III told graduates on Sunday during their commencement exercises at Fort Gregorio Del Pilar in this city.

(If it is our duty to champion the honor code in this institution, we should also uphold it outside the PMA.)

The President’s speech drew applause as he referred to the controversial Honor Code that has come under fire after the dismissal of Cadet First Class Aldrin Jeff Cudia. 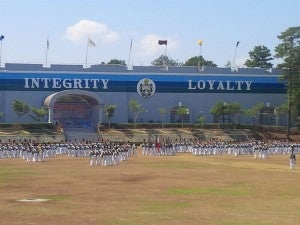 BAGUIO City, Philippines—Philippine Military Academy (PMA) Superintendent Oscar Lopez on Sunday stressed the importance of the academy’s honor code in shaping the life and values of a cadet.

Aquino said if it is prohibited to lie, steal and cheat inside PMA, the graduates should also uphold the same principles outside the academe.

Cudia was dismissed for allegedly lying about why he was late for class. However, his sister’s post on social media snowballed into a campaign calling for a reconsideration.

On Saturday afternoon, the Cudia family met with Aquino for more than two hours at The Mansion in Baguio City, in another bid to get the commander-in-chief to reverse the PMA Honor Committee’s decision.

However, later that day Defense Secretary Voltaire Gazmin announced that Cudia will not be able to graduate, pending a re-investigation of his case by Armed Forces of the Philippines (AFP) chief-of-staff Emmanuel Bautista as ordered by Aquino

(If it is prohibited to lie in class and to our fellow cadets, we shouldn’t let others, soldiers or ordinary people, deceive their fellow men and the constitution.)

(If cheating in exams is strictly prohibited, we should also refrain from the practice of overpricing in the procurement of arms and equipment.)

(If stealing from a schoolmate merits punishment, you should also help in holding accountable those who steal from the taxpayers’ money.)

The military has long been plagued by cases of graft and corruption.

The President told the new members of the AFP to stay true to the mandate of the organization by protecting the nation and the state.