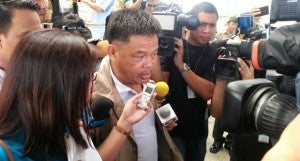 The family of dismissed Philippine Military Academy cadet Jeff Aldrin Cudia visited Camp Aguinaldo to submit an appeal seeking a retrial of the case. His father, Renato, thanked their supporters. He said they were leaving it up to God. INQUIRER.net FILE PHOTO

BAGUIO CITY, Philippines – President Benigno Aquino III has withheld his decision on the appeal by Cadet First Class Aldrin Jeff Cudia to graduate with his class Sunday and instead directed his military chief to investigate the cadet’s case, Defense Secretary Voltaire Gazmin said in a statement Saturday here.

At the same time, Gazmin said Aquino asked Cudia and his family to formalize their appeal in writing for his review.

He added it was agreed that “Cadet First Class Cudia will not graduate tomorrow, without prejudice to whatever will be the result of their new appeal, which is now elevated to the CSAFP (Emmanuel Bautista) whom the President directed to investigate.

Aquino as commander-in-chief will preside over the graduation ceremonies.

Briguez, the commandant of cadets, said that the Cadet Review and Appeals Board (CRAB) denied Cudia’s motion for reconsideration.

“The final recommendation of the CRAB is to deny the appeal of Cadet Cudia,” Briguez said, adding that only the President as the commander-in-chief of the military could reverse Cudia’s fate.

The CRAB’s recommendation was forwarded to Aquino, who arrived here Saturday afternoon.

Cudia spent the day in a room in the Bachelor Officers’ Quarters as his classmates had their Recognition Day.

The class’ 10 topnotchers and other cadets who excelled in different fields were given awards in a ceremony led by Gazmin.

Gazmin, a member of PMA Class ’68, did not make any reference to the Cudia case in his speech.

By Briguez’s account, Cudia lost in the three arguments on which he based his appeal.

Cudia presented an affidavit by Commodore Junjie Tabuada, head of the PMA Naval Warfare Group, quoting honor committee member, Cadet 1st Class Dalton John Lagura, as saying that he (Lagura) was pressured into changing his vote from not guilty to guilty.

“According to the cadet, it was his own voluntary volition (sic) to change his vote from not guilty to guilty after he heard the explanation of the other members of the voting members of the Honor Committee,” Briguez said.

Briguez said that Tabuada himself would now be investigated for his affidavit.

“There is another recommendation to the CRAB for a separate investigation for Commander Tabuada but this has nothing to do with the honor code. It has something to do with conduct unbecoming  an officer and a gentleman, which falls under the Articles of War,” Briguez said.

Cudia accused the Honor Committee of grave abuse of discretion after its members changed its 8-1 vote to 9-0, the unanimous vote required to convict a cadet who had violated the honor code.

Briguez said the appeals board upheld the procedure agreed upon by all cadets and followed by the Honor Committee that in a 7-2 or 8-1 vote, the committee memebers will “go into a jury type executive session termed chambering.”

“It is like an additional explanation where all of them would go to the ante room and discuss what are the reasons why they voted guilty or not guilty. This has been their procedure since they started fourth-class year until first year and everybody accepted it conscientiously,” Briguez said.

On Cudia’s third and final point that the Honor Committee committed grave abuse of discretion for supposedly not hearing the testimony of professor Monica Costales, Briguez said the teacher submitted three testimonies.

The Honor Committee determined that Cudia had lied when he said he was late for class because the teacher made him and some of his classmates wait for their grades.

Briguez said the PMA would enforce the decision of the appeals board, despite a petition filed in the Supreme Court asking for a status quo ante order for Cudia.

“The decision of the PMA stays. He has all legal remedies available to him,” Briguez said.