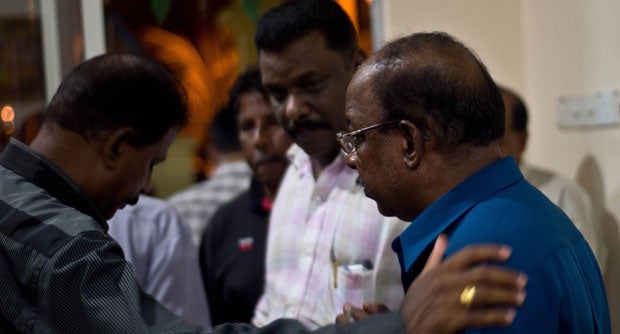 In this picture taken on March 14, 2014, Subramaniam Gurusamy, 60, (R) father of Puspanathan who was onboard the missing Malaysia Airlines MH370 flight is consoled by friends at his home in Teluk Panglima Garang, outside Kuala Lumpur. Malaysian Prime Minister Najib Razak said that Malaysia was ending a search in the South China Sea for a vanished jetliner after investigations indicated the missing plane likely turned far to the west. AFP

BEIJING — Relatives of the passengers aboard Malaysia Airlines flight MH370 voiced fear and concern Saturday after reports that the jet’s diversion may have been intentional, demanding answers one week after the plane’s disappearance.

As emotions over the missing plane continued to run high, China’s foreign ministry and official news agency added to the urgency, upping their calls for greater clarity from the Malaysian government and other parties.

Malaysian Prime Minister Najib Razak told reporters in Kuala Lumpur that the plane’s sudden changing of direction after vanishing from civilian radar was “consistent with deliberate action by someone on the plane” and that its final satellite communication came more than six-and-a-half hours after it vanished from civilian radar.

The flight’s 153 Chinese passengers comprised nearly two-thirds of the 239 people on board, and relatives gathered at the Lido Hotel in Beijing said after watching Razak’s televised press conference that the prime minister’s remarks did little to ease their nerves, with some openly suggesting foul play on the Malaysian side.

“I feel (Malaysia Airlines) had a role to play in this incident,” Wen Wancheng, a man from east China’s Shandong province whose son is among the passengers on the missing flight, told a gaggle of reporters after watching Razak’s news conference.

He expressed scepticism at the latest update given by Razak regarding the time of the plane’s final communication, calling the flight’s disappearance “a conspiracy…from the beginning”.

“The original time they gave was 1:21 am., and today it was officially changed to 8:11 am.,” he said. “It’s the prime minister who said it. You can tell from the timing whether they’re hiding anything or not.”

Several passengers’ relatives told AFP after a two-hour meeting with airline representatives in Beijing earlier Saturday that they were frustrated with the lack of definite information on the plane’s whereabouts.

“Right now, anything is possible,” one middle-aged woman said. “We keep hoping there will be some good news, but it is not going well.”

“I’m very disappointed in all of them,” another woman said, referring to both the airline and the Chinese and Malaysian governments. “They haven’t told us anything.”

China’s foreign ministry, meanwhile, continued to press Malaysia for more details, with foreign ministry spokesman Qin Gang calling in a statement for “thorough and exact information” about the missing flight.

Qin also said that Chinese “technical specialists” were on their way to Malaysia to aid with the ongoing investigation.

The official Xinhua news agency, which earlier this week emphasised China’s “right of access to the latest information” from Malaysian authorities, ratcheted up its criticism in a Saturday night commentary suggesting that either a “dereliction of duty or reluctance to share information” was to blame.

“As the leader of the international search and rescue mission, Malaysia bears inescapable responsibility,” Xinhua wrote.

“Other parties that possess valuable data and information, including plane maker Boeing, engine manufacturer Rolls-Royce and intelligence superpower the United States, should also have done a better job,” it said.

With conspiracy theories abounding — and with family members desperately clinging on to hope of their loved ones’ existence — many users of China’s online social networks shared a news report of a woman who said she had received a missed call from her father, who was on board the plane.

The unnamed woman “said she had gotten a missed call from her father onboard, and the number said ‘powered off’ later when she called back,” the Beijing Times reported.

Other users responded with relief at the possibility that the incident may have been a hijacking rather than a crash.
“A hijacking is better than a crash,” said one user of Sina Weibo, a Chinese version of Twitter. “Hope Malaysia will not come out and deny it later.”

Read Next
Aquino meets Cudia, family, no decision yet–source
EDITORS' PICK
Omicron variant detected in more countries as scientists race to find answers
Legarda: Ending Violence Against Women, a cause for all
Villar Group gears up for AllValue Shopping Party on Dec. 3; around P 1-million promos and discounts up for grabs
A delightful blessing!
Gov’t eyeing COVID-19 vaccine booster for essential workers, indigents by Dec. 10
Gov’t plans to open COVID-19 vaccination for 5- to 11-yr-olds by January 2022
MOST READ
Quiboloy warns of ‘much worse than Omicron virus’ if his ‘persecution’ is not stopped
Two cases of Omicron variant detected in Canada, govt’ says
MMDA: Number coding during afternoon rush hours back this week
Marcoleta defends pol ads on ABS-CBN
Don't miss out on the latest news and information.