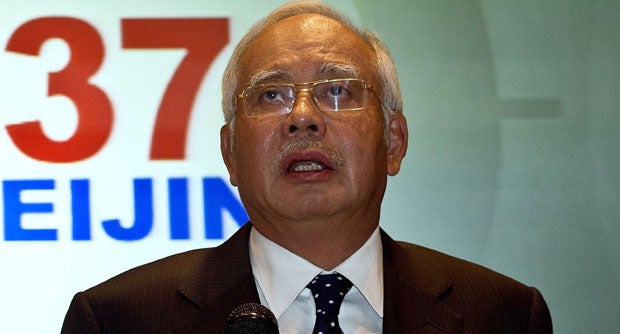 Malaysian Prime Minister Najib Razak addresses the media during a press conference at a hotel near Kuala Lumpur International Airport in Sepang on March 15, 2014. Prime Minister Najib Razak said on March 15 that Malaysia was ending a search in the South China Sea for a vanished jetliner after investigations indicated the missing plane likely turned far to the west. AFP

KUALA LUMPUR—Malaysia’s leader Saturday said communications aboard a missing jet were switched off and its course deliberately changed by someone on board before the aircraft disappeared a week ago, but stopped short of saying it had been hijacked.

Final satellite communication with the Boeing 777 flying from Kuala Lumpur to Beijing came more than six-and-a-half hours after it vanished from civilian radar at 1:30 a.m. on March 8, Prime Minister Najib Razak told a televised press conference.

The movement of the plane in the interim period, during which it changed direction and passed back over the Malaysian peninsula towards the Indian Ocean, was “consistent with deliberate action by someone on the plane,” Najib said.

“Despite media reports that the plane was hijacked, I wish to be very clear: we are still investigating all possibilities as to what caused MH370 to deviate from its original flight path,” he added.

Najib said his announcement was based on new information from satellite contact with the plane and military radar data.

The combined data suggested “with a high degree of certainty” that the plane’s two automated communications systems — Aircraft Communications Addressing and Reporting System (ACARS) and its transponder — were “switched off” one after the other before it reached the point over the South China Sea where it dropped out of civilian radar contact.

It then turned back and flew in a westerly direction back over peninsular Malaysia before turning northwest.

The last confirmed communication between the plane and satellite was at 8:11 a.m., Najib said, adding that investigators were calculating how far the aircraft may have flown afterwards.

“This new satellite information has a significant impact on the nature and scope of the search operation,” the prime minister said.

“We are ending our operations in the South China Sea and reassessing the redeployment of our assets. We are working with the relevant countries to request all information relevant to the search, including radar data,” he added.

Read Next
Malaysian PM refuses to confirm hijacking report
EDITORS' PICK
Look Through: The fate of impounded stray dogs
House energy committee chair Arroyo bats for cheap electricity
What to watch out for when selecting a video surveillance solution
23,000 cops to be deployed nationwide for school reopening
Unleash the photographer in you this World Photography Day with vivo smartphones
DOH says COVID-19 cases plateauing, but public shouldn’t be ‘complacent’
MOST READ
Korina Sanchez reunites with former ABS-CBN co-anchors Julius Babao, Cheryl Cosim
Sharon Cuneta asks for prayers for friend in ICU who suffered silent stroke
QC school’s shutdown violated rules – CHEd
Light therapy could be the answer to your sleep problems
Don't miss out on the latest news and information.