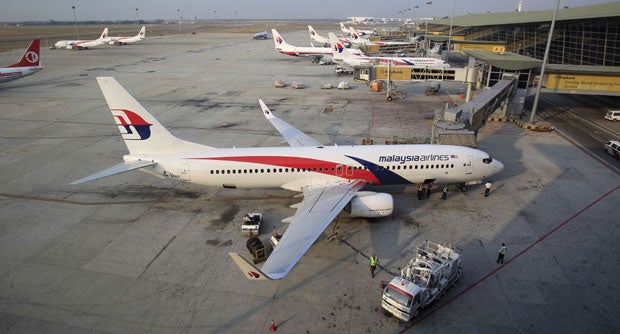 Ground staff work on a Malaysia Airlines plane at Kuala Lumpur International Airport in Sepang, Malaysia, Wednesday, March 12, 2014. The missing Malaysian jetliner may have attempted to turn back before it vanished from radar, but there is no evidence it reached the Strait of Malacca, Malaysia’s air force chief said Wednesday, denying reported remarks he said otherwise. The statement suggested continued confusion over where the Boeing 777 might have ended up, more than four days after it disappeared en route to Beijing from Kuala Lumpur with 239 people on board. AP FILE PHOTO

“Despite reports that the plane was hijacked, I wish to be very clear that we are still investigating all the possibilities as to what caused MH370 to deviate from its flight path,” Razak said in a press conference Saturday.

After seven days of search, he said Malaysian authorities have not confirmed the precise location of the plane when it made its last contact with the satellite.

“However, based on the data, the aviation authorities have determined that the planes’ last communication with the satellite was with one in two corridors on the border of Kazakhstan and Turkmenistan, from Indonesia to southern Indian ocean,” he said.

The Prime Minister also said they are calling off their search operations in the South China Sea.