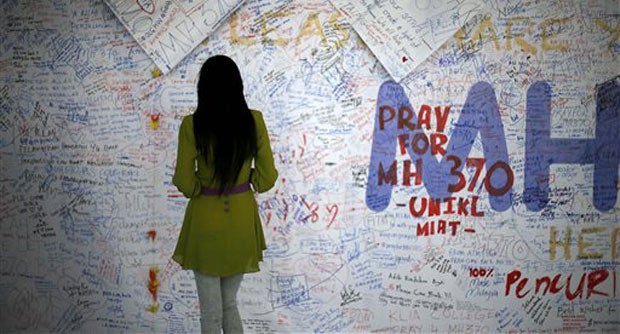 A woman reads messages and well wishes to people involved with the missing Malaysia Airlines jetliner MH370, Saturday, March 15, 2014 in Sepang, Malaysia. A Malaysian passenger jet missing for more than a week had its communications deliberately disabled and its last signal came about seven and a half hours after takeoff, meaning it could have ended up as far as Kazakhstan or deep in the southern Indian Ocean, Malaysia’s Prime Minister Najib Razak said Saturday. AP

KUALA LUMPUR, Malaysia— Attention focused Sunday on the pilots of the missing Malaysia Airlines flight after the country’s leader announced findings so far that suggest someone with intimate knowledge of the Boeing 777’s cockpit seized control of the plane and sent it off-course.

Prime Minister Najib Razak gave the first detailed findings Saturday in the more than weeklong investigation into the missing plane, showing that someone severed communications with the ground and deliberately diverted Flight 370 after it departed Kuala Lumpur for Beijing on March 8 on an overnight flight with a 12-person crew and 227 passengers.

Satellite data suggest it flew for at least 7 ½ hours and that it could have reached as far northwest as Kazakhstan or deep into the southern Indian Ocean, Najib said. “Clearly the search for MH370 has entered a new phase,” Najib said at a televised news conference. “It is widely understood that this has been a situation without precedent.”

Experts say that whoever disabled the plane’s communication systems and then flew the jet must have had a high degree of technical knowledge and flying experience. One possibility they have raised was that one of the pilots wanted to divert the plane for some reason — possibly even to commit suicide. Piracy and hijacking also have been cited as possible explanations.

Najib stressed that investigators were looking into all possibilities.

“In view of this latest development, the Malaysian authorities have refocused their investigation into the crew and passengers on board,” Najib told reporters, reading from a written statement but not taking any questions.

Police on Saturday went to the Kuala Lumpur homes of both the pilot and co-pilot of the missing plane, according to a guard and several local reporters. Malaysian police have said they are looking at the psychological state, family life and connections of pilot Zaharie Ahmad Shah, 53, and co-pilot Fariq Abdul Hamid, 27. They released no details on their investigation so far.

Zaharie, who joined Malaysia Airlines in 1981 and had more than 18,000 hours of flying experience, was known as an avid aviation enthusiast who had set up an elaborate flight simulator at home.

Fariq was contemplating marriage after having just graduated to the cockpit of a Boeing 777. He has drawn scrutiny after the revelation that he and another pilot invited two female passengers to sit in the cockpit during a flight in 2011.

Two-thirds of the plane’s passengers were Chinese, and China’s government has been under pressure to give anxious relatives firm news of the aircraft’s fate. Beijing’s state media expressed irritation Saturday at what it described as Malaysia’s foot-dragging in releasing information about the investigation and the search.

At a hotel near Beijing’s airport, some relatives said they felt deceived at not being told earlier about the plane emitting signals for 7 ½ hours. “We are going through a roller coaster, and we feel helpless and powerless,” said a woman, who declined to give her name.

Najib, at his news conference, said he understood the need for families to receive information, but that his government wanted to release only fully corroborated details.

The missing Malaysia Airlines flight departed Kuala Lumpur at 12:40 a.m. heading toward Beijing. Investigators now have a high degree of certainty that one of the plane’s communications systems — the Aircraft and Communications Addressing and Reporting System (ACARS) — was partially disabled before the aircraft reached the east coast of Malaysia, Najib said. Shortly afterward, someone on board switched off the aircraft’s transponder, which communicates with civilian air traffic controllers.

Najib confirmed that Malaysian air force defense radar picked up traces of the plane turning back westward, crossing over Peninsular Malaysia into the northern stretches of the Strait of Malacca. Authorities previously had said this radar data could not be verified.

“These movements are consistent with deliberate action by someone on the plane,” Najib said, saying that a team of Malaysian, U.S. and British aviation investigators concurred in the findings so far.

Although the aircraft was flying virtually blind to air traffic controllers at this point, onboard equipment continued to send “pings” to satellites.

To turn off the transponder, someone in the cockpit would have to turn a knob with multiple selections to the “off” position while pressing down at the same time, said John Goglia, a former member of the U.S. National Transportation Safety Board. That’s something a pilot would know, but it could also be learned by someone who researched the plane on the Internet, he said.

The ACARS system has two aspects, Goglia said. The information part of the system was shut down, but not the transmission part. In most planes, the information section can be shut down by hitting cockpit switches in sequence in order to get to a computer screen where an option must be selected using a keypad, said Goglia, an expert on aircraft maintenance.

That’s also something a pilot would know how to do, but that could also be discovered through research, he said.

But to turn off the other transmission portion of the ACARS, it would be necessary to go to an electronics bay beneath the cockpit. That’s something a pilot wouldn’t normally know how to do, Goglia said. The Malaysia plane’s ACARS transmitter continued to send out blips that were recorded by satellite after the transponder was turned off. The blips don’t contain any messages or data, but the satellite can tell in a very broad way what region the blips are coming from.

Malaysia’s prime minister said the last confirmed signal between the plane and a satellite came at 8:11 a.m. — 7 hours and 31 minutes after takeoff. This was more than five hours later than the previous time given by Malaysian authorities as the possible last contact.

Airline officials have said the plane had enough fuel to fly for up to about eight hours.

“The investigations team is making further calculations which will indicate how far the aircraft may have flown after this last point of contact,” Najib said.

He said authorities had determined that the plane’s last communication with a satellite was in one of two possible arcs, or “corridors” — a northern one from northern Thailand through to the border of the Central Asian countries Kazakhstan and Turkmenistan, and a southern one from Indonesia to the southern Indian Ocean.

The northern route might theoretically have taken the plane through China, India, Pakistan, Afghanistan — which hosts U.S. military bases — and Central Asia, but it was unclear how it could fly through the region undetected. The region is also home to extremist Islamist groups, unstable governments and remote, sparsely populated areas.

Flying south would have put the plane over the Indian Ocean, with an average depth of 3,890 meters (12,762 feet) and thousands of kilometers (miles) from the nearest land mass.

Britain-based aviation security consultant Chris Yates thought it was highly unlikely the plane would have taken the northern route across land in Asia. “In theory, any country that sees a strange blip is going to get fighter planes up to have a look,” he said. “And if those fighter planes can’t make head or tail of what it is, they will shoot it down.”

At least 14 countries are involved in the search for the plane, using 43 ships and 58 aircraft.