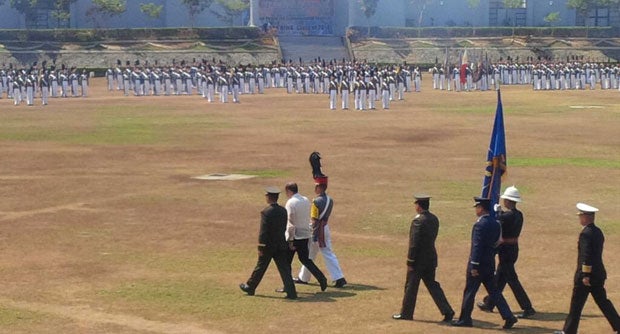 BAGUIO CITY, Philippines – President Benigno Aquino III on Sunday presented the graduating cadets of the Philippine Military Academy (PMA) with their diplomas and awards at Fort Gregorio Del Pilar in this city.

The announcement of cadets’ graduation was met with cheers and applause from relatives and guests.

As of posting time, the PMA commencement program was still ongoing.

Class Siklab Diwa made headlines in the past weeks because of the controversial dismissal of Cadet First Class Aldrin Jeff Cudia. Cudia was accused of violating the PMA’s honor code by lying about being late in class.

While the honor committee found him guilty of the violation, his sister Avee’s post on social media about his alleged unfair dismissal snowballed into a campaign for his reinstatement.

However, on Saturday, Gazmin announced that Cudia will not be able to join his batchmates. He said the President instead deferred the decision on his case and assigned General Emmanuel Bautista, chief-of-staff of the Armed Forces of the Philippines, to investigate the matter.