Cardinal Quevedo ‘a gift to Mindanao’ 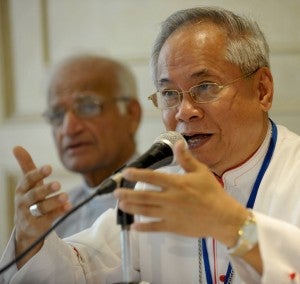 Filipino Arcbishop Orlando Quevedo, secretary-general of the Federation of Asian Bishops Conferences, gestures as he speaks during a press briefing at the Pope Pius XII Catholic Centre in Manila on Aug. 15, 2009, flanked by Arcbishop Lowrence Saldanha (L) from Pakistan. The former newsboy who became an Oblate priest, bishop, archbishop and peace advocate is now a prince of the Catholic Church, the second for the Philippines after the elevation to cardinal of Manila Archbishop Luis Antonio Tagle by Pope Benedict XVI in November 2012. AFP PHOTO/JAY DIRECTO

KIDAPAWAN CITY—The chant “Habemus cardenalem” (We have a cardinal) reverberated around the Oblates of Mary Immaculate (OMI) congregation here in Mindanao and across the country on Sunday night as news spread that Cotabato Archbishop Orlando B. Quevedo had been appointed by Pope Francis to the College of Cardinals.

The former newsboy who became an Oblate priest, bishop, archbishop and peace advocate is now a prince of the Catholic Church, the second for the Philippines after the elevation to cardinal of Manila Archbishop Luis Antonio Tagle by Pope Benedict XVI in November 2012.

The Oblates gladly received the news, according to Father Larry de Guia, the Oblate provincial superior.

“This is a gift to Mindanao Church, strengthens interreligious dialogues, vocation promotion to the [Oblates] and the Mindanao peace process,” De Guia said.

“The elevation of [Archbishop] Quevedo to the College of Cardinals is timely as the OMI Philippine Province celebrates its 75th year of arrival in the Philippines,” De Guia said.

The Oblates came to the Philippines in 1939, the same year that Quevedo was born in Laoag City, Ilocos Norte province.

In 1947, Quevedo’s family moved to Marbel town (now Koronadal City), South Cotabato province, where he attended high school and became an altar boy in the parish church and doubled as a newsboy for the Oblates’ weekly newspaper, Mindanao Cross, in his senior year.

On Saturday mornings when he was not doing his altar job, Quevedo would get 50 copies of Mindanao Cross from the parish convent and sell them to Catholics emerging from the church.

“I had 50 copies weekly. If I sold all of them, I would earn P5, a lot of money then and enough to finance my school needs,” Quevedo recalled as Mindanao Cross celebrated its 65th foundation anniversary last year.

“I took pride in selling Mindanao Cross every weekend. It came out on Saturdays, no classes, so I spent my mornings delivering newspapers,” he said in an interview after being named president of the Catholic Bishops Conference of the Philippines (CBCP)in 1999.

After high school, Quevedo took special college education and entered the San Jose Seminary in Quezon City. He was among the first few Filipinos who joined the Oblates.

He was ordained priest in June 1964 and went on to become prelate of Kidapawan in Cotabato in July 1980.

In October that year, Quevedo was ordained bishop and he continued to serve as prelate of Kidapawan until he was appointed archbishop of Nueva Segovia, an archdiocese of the Catholic Church whose territory covers the two Ilocos provinces and the Cordillera Administrative Region.

Quevedo served in Nueva Segovia until May 1998 when he was appointed archbishop of Cotabato.

Influenced by the Oblate mission of interreligious dialogue, Quevedo cofounded the Bishop Ulama Conference of the Philippines, with the late Lanao del Sur Gov. Mahid Mutilan.

The conference is a congregation of peace workers from the Catholic and Muslim communities, as well as peace advocates from other faiths who work for an end to the age-old conflict in Mindanao.

The group spearheaded the Mindanao Week of Peace celebrations aimed at instilling in the minds of the peoples of Mindanao that peace can be achieved through dialogue.

Blessing for the Church

Lingayen-Dagupan Archbishop Socrates Villegas, president of the Catholic Bishops’ Conference of the Philippines (CBCP), said that as a member of the College of Cardinals, Quevedo could “work to assist the Pope in reaching out to the marginalized in Mindanao.”

In a statement issued on Monday, Villegas said Quevedo was known for his mental clarity and intellectual brilliance.

“He is an archbishop who is truly passionate for the formation of basic ecclesial communities. He has been a pastor up north in Ilocos Sur and down south in Cotabato,” Villegas said.

“He is an intellectual giant with a very simple lifestyle and very warm fraternal manners. He is a blessing for the Church,” he said.

In a separate statement, Cardinal Tagle called Quevedo’s appointment as cardinal a “blessing” to the whole Catholic Church.

“The Church in the Philippines and Asia has been greatly blessed these past decades by the service and leadership of Archbishop Quevedo. Now this blessing extends to the whole Church,” Tagle said.

Quevedo is one of 19 prelates from Asia, Africa and elsewhere, including Haiti and Burkina Faso, whom Pope Francis announced on Sunday as his first choices for the College of Cardinals.

Also to be installed as cardinals in a consistory at the Vatican on Feb. 22 are the Italian Archbishop Pietro Parolin, who is also the Pope’s secretary of state, and the German head of the Vatican’s watchdog office for doctrinal orthodoxy, Archbishop Gerhard Ludwig Müller.

While working for interfaith relations, Quevedo pursues evangelization to help strengthen the Church, and has turned to young people for help.

In October 2012, in a homily during Mass at the Basilica of Santa Maria Maggiore in Rome, Quevedo urged the young people of the world to maximize the use of social media and other tools of communication to evangelize.

Quevedo cited then Blessed Pedro Calungsod who at age 14 joined a Catholic mission and became an evangelizer.

“The youth today can do this with the means of social communications,” Quevedo said.

“Send biblical messages by SMS, by texting. Use Twitter and blogs to share your faith, chat with others about how your faith has always been an anchor of hope in the midst of difficulties,” Quevedo said.—With reports from Nina P. Calleja in Manila and AP