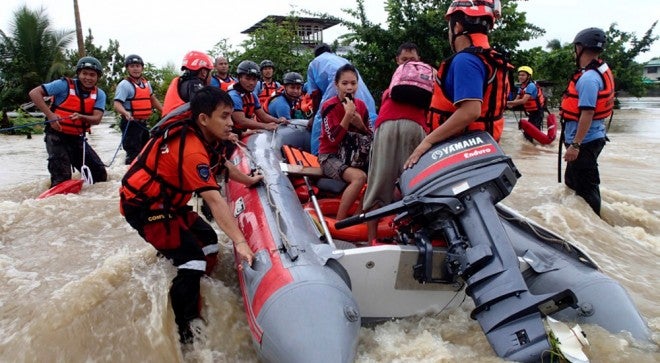 TO THE RESCUE. Personnel from the ComVal Emergency Response Team evacuate residents who were trapped in the flooding of Compostela Valley province in Mindanao. Floods and landslides triggered by heavy rains from a low pressure area have affected 132,000 people from 10 provinces. AP

At least 20 people died, 13 were missing and thousands were displaced when landslides and flash floods brought by a low pressure area (LPA) struck towns in Mindanao that are still recovering from Typhoon “Pablo” (international name: Bopha), according to an Associated Press report.

The calamity came just two months after Supertyphoon “Yolanda” devastated Leyte, Samar and other areas in the Visayas.

Most of the dead and missing were from Compostella Valley and Davao Oriental provinces, said Maj. Reynaldo Balido, spokesman of  the disaster-response agency.

A total of 25,634 families, or 128,215 people, were temporarily taking shelter in 79 evacuation centers in 16 municipalities and 2 cities in the region because of the flooding and landslides.

At least 33 roads and bridges were damaged, making the search and rescue operations harder for emergency responders.

Several local government units in Davao del Norte have been placed under a state calamity, so funds could be used in providing help to affected areas.

The weather bureau has not discounted the possibility that the LPA that is bringing heavy rains over the Visayas and portions of Mindanao could develop into a tropical depression.

Forecaster Aldczar Aurelio said the weather system was expected to hover over the country for several more days because of its slow northwest movement.

Aurelio said the LPA would continue to bring cloudy skies with moderate to heavy rains and thunderstorms in the Visayas as well as Northern Mindanao and Caraga.

He cautioned fishing vessels and other small seacraft against venturing out into waters off the northern and eastern seaboards of Luzon and the Visayas.

Aurelio said strong to gale-force winds associated with the surge of amihan (northeast monsoon) and the LPA would generate waves  up to 5 meters and make sea conditions rough to very rough.

In its forecast for Tuesday, the Philippine Atmospheric, Geophysical and Astronomical Services Administration (Pagasa) said that while the Visayas and northern and northeastern Mindanao were expected to have bad weather, Bicol, Mimaropa (Mindoro, Marinduque, Romblon and Palawan) and the rest of Mindanao would have cloudy skies with light to moderate rain showers and thunderstorms.

Metro Manila and the rest of Luzon will be cloudy with isolated light rains.

Gov. Rodolfo del Rosario ordered the suspension of classes throughout Davao del Norte due to the bad weather.

A 6-year-old girl was killed while 10 others were wounded after a series of landslides hit the mining area of Mt. Diwata in Monkayo town on Sunday.

Another 4-year-old child was killed in the nearby village of Babag in the same town.

The Office of Civil Defense said another resident was killed in Barangay Andap, New Bataan, also in Compostela Valley. The village was one of the areas ravaged by Typhoon Pablo on Dec. 4, 2012. With gusts of 210 kilometers per hour, Pablo devastated Mindanao, causing 1,067 deaths, 834 missing and P37 billion worth of damage to infrastructure and agriculture.

A 70-year-old woman was also killed by a landslide in Tagbaros village, Maco town, in Compostela Valley.

In Davao Oriental, five people were declared dead while 23 others were wounded in the village of Bangol in Tarragona town. Another resident died in the nearby village of Tubaon.

A resident was also killed in the village of Marayag in Lupon town.

A total of 1,971 families, or more than 7,000 people, were staying in evacuation centers in Compostela Valley, and most of the roads there were still impassable to light vehicles, according to Raul Villocino, the provincial disaster action officer.

The junction of the Pan-Philippine highway in Bincungan, Tagum, was also rendered impassable as water from the mountains reached downstream, Tagalo said, even as he called on residents to heed government calls to evacuate.

On Monday, evacuations of residents continued as flooding persisted in several towns in Compostela Valley and Davao del Norte.

The Department of Social Welfare and Development (DSWD) said it was extending more than P33 million worth of assistance to 1,668 families displaced as a result of the landslide and flooding.

Social Welfare Secretary Corazon “Dinky” Soliman said the assistance came in the form of emergency relief resources such as standby funds of P2.64 million, 24,456 family food packs worth P6.25 million, and other food and nonfood items amounting to P24.6 million.

Soliman said the items and cash were readily available for augmentation to local government units affected by the flooding.

As of noon Monday, 34 evacuation centers remained open to accommodate the families consisting of 7,958 people.

Of the evacuation centers, 26 are in Caraga serving 1,080 families, three in northern Mindanao providing temporary shelter to 116 families, and five in the Davao region housing 2,465 families.

A total of 251 damaged houses were initially reported in the Davao region.

In Legazpi City, Albay Gov. Joey Salceda suspended classes on Monday in the prekindergarten and kindergarten levels across the province as local disaster authorities braced for heavy rains in a wide area in Bicol brought on by a low pressure area in Mindanao.

Salceda issued the suspension of classes on Sunday as a precautionary measure due to heightened risks to public health, safety and welfare.

The Albay Disaster Risk Reduction and Management Council advisory also called on local disaster councils to be on heightened alert for possible flooding, and lahar and mudflow along the slopes of Mount Mayon, including landslide brought by moderate to heavy rainfall.

A total of 4,217 passengers were stranded in the ports of Matnog, Sorsogon, and Cebu City due to bad weather caused by Typhoon “Agaton,” according to the spokesman of the Philippine Coast Guard (PCG).

He said 45 trips of interisland vessels in the two areas were canceled because of bad weather. The canceled trips were supposed to originate from Tagbilaran City (27), Cebu (14) and Matnog (four).