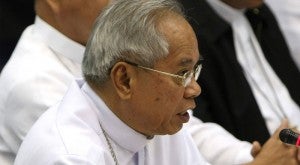 KIDAPAWAN CITY, Philippines — The words “Habemus cardenalem (We have a cardinal)” reverberated among members of the congregation Oblates of Mary Immaculate (OMI) in Mindanao and throughout the country when news broke out Sunday that Pope Francis had named Cotabato Archbishop Orlando B. Quevedo, OMI, a cardinal.

The former newsboy who became an Oblate priest, a bishop, an archbishop and peace advocate, is now a cardinal or prince of the Catholic Church.

The news was a welcome development for the OMI priests, according to Fr. Larry de Guia, OMI provincial superior.

“This is a gift to Mindanao Church, strengthens inter-religious dialogues, vocation promotion to the OMIs and the Mindanao peace process,” De Guia said of the 74-year-old Quevedo, who will turn 75 on March 11.

“The elevation of Cardinal Quevedo to the college of cardinals is timely as the OMI Philippine Province celebrates its 75th (anniversary)  in  the Philippines,” De Guia said of Quevedo, who before joining the OMI, was a street newsboy of the Mindanao Cross, an OMI-owned newspaper.

Quevedo sold the Mindanao Cross every Saturday throughout his senior year at Notre Dame of Marbel High School in the town of Marbel, now Koronadal City, in South Cotabato. On Saturday mornings while not doing his “sacristan jobs,” Quevedo would stand outside the Catholic Church in Marbel selling the Mindanao Cross.

Every Saturday, he would get 50 copies of the weekly paper from the parish convent and sell them to Catholics emerging from the Church.

“I had 50 copies weekly. If I sold all of them, I would earn P5, a lot of money then and enough to finance my school needs,” Quevedo recalled as the Mindanao Cross celebrated its 65th year foundation anniversary last year.

“I took pride in selling the Mindanao Cross every weekend. It comes out on Saturdays—no class—so I spent my mornings delivering newspapers,” he said in an interview after being named president of the Catholic Bishops Conference of the Philippines.

In his high school days, Quevedo was an altar boy. After high school, Quevedo took a special college course and entered the San Jose Seminary in Quezon City. He was among the first Filipinos who joined the Oblates in the congregation’s early years in Philippines.

Influenced by the Oblate mission of inter-religious dialogue, Quevedo co-founded the Bishop Ulama Conference of the Philippines with the late Lanao del Sur Gov. Mahid Mutilan.

The BUC spearheaded the Mindanao Week of Peace celebrations aimed at instilling in the minds of Mindanaoans that peace can be achieved through dialogue. It is a congregation of Catholic, Islam and other faiths in Mindanao that works for the attainment of peace in the troubled southern Philippines.

Lingayen-Dagupan Archbishop Socrates Villegas, current president of the  CBCP, said that as a member of the College of Cardinals, “Orlando Cardinal Quevedo will be able to assist the Pope in reaching out to the marginalized in Mindanao.”

Archbishop Villegas, in a CBCP press statement, said Quevedo, a senior member of the Catholic hierarchy in the Philippines, is known for his intellect.

“He is an archbishop who is truly passionate for the formation of basic ecclesial communities. He has been a pastor up north in Ilocos Sur and down south in Cotabato,” the CBCP president said of the cardinal-designate.

“He is an intellectual giant with a very simple lifestyle and very warm fraternal manners. He is a blessing for the Church. A cardinal from Mindanao is a papal tribute to the strength of the Catholic faith in that region of our country. It is a proof that the Catholic faith in Mindanao is now bearing rich fruits; Cardinal Quevedo is its living testimony,” Villegas said.

In October 2012, while delivering homily at a Mass  at the Basilica of Sta. Maria Maggiore in Rome, Quevedo urged the young people of the world to maximize the use of social media and other tools of communications to evangelize.

He cited Blessed Pedro Calungsod who at age 14 joined a Catholic mission and became evangelizer of the peoples.

“The youth today can do this with the means of social communications,” he said, adding that “often the Internet is used for evil, for pornography, for scams and crimes.” Instead, Quevedo said, the Internet should be used to share what is good.

“Send biblical messages by SMS, by texting. Use Twitter and blogs to share your faith, chat with others about how your faith has always been an anchor of hope in the midst of difficulties,” Quevedo added in his homily.