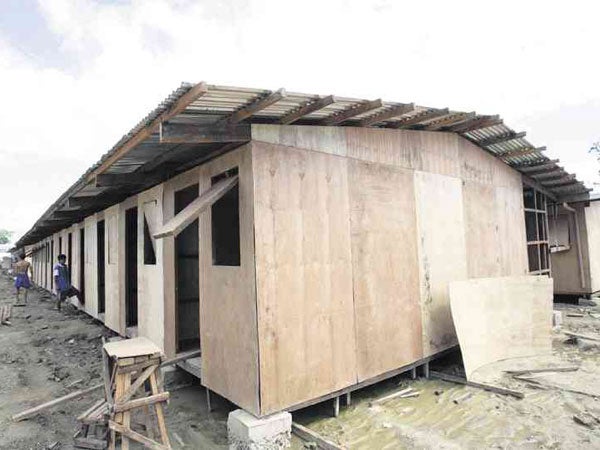 MANILA, Philippines—Architect Jun Palafox, who has worked in various rebuilding and rehabilitation programs in different countries, said that the bunkhouses built by the government as temporary shelters for people rendered homeless by Yolanda were substandard and undersized.

In an interview with Inquirer Radio 990AM, the urban planner also said that the construction and design of the temporary shelters were “inhumane.”

“I can confirm they (bunkhouses) were substandard and undersized,” said Palafox.

International standards, he said, require bunkhouses to be at least 20 square meters and should have two bedrooms.

“Daughters should not be sleeping with their fathers or brothers, it’s a basic human requirement,” he explained.

“What I saw there was so inhumane.”

Palafox, who has worked with 38 other countries in rebuilding disaster-stricken areas, compared the bunkhouses that they built in Sri Lanka and Malaysia to the ones being built in Leyte.

“I’m reminded of the saying, `We build monuments for the dead but we can’t even provide decent housing for the living’,’’ he said by phone when interviewed by the Inquirer.

He added that the bunkhouses in Leyte have violated various laws in terms of building construction, saying that the spaces for the families are cramped and the materials used were fire hazards.

“Various international organizations confirmed that they (bunkhouses) are cramped and are fire hazards; there is no privacy; it violates the building code… I would not put my family there,” Palafox said. “How can you put a family of five into a six to nine square-meter room while the materials used were one-fourth plywood.”

Palafox also said that the roofing, which were made with  “dos aguas” galvanized iron sheets (two slopes) were the same materials that were blown away during the onslaught of “Yolanda.”

The architect said the builders should have opted for four slopes.

They used the same materials that were blown away in the storm, and they just repeated what was there in the first place,” Palafox said. “You don’t have to be an engineer or an architect to see it, it is a no brainer, maybe a first year Architecture student can tell you this is substandard,” he said.

An international shelter group reported that the bunkhouses being developed by the Department of Public Works and Highways did not comply with internationally recognized standards and best practices.

The Camp Coordination and Camp Management had raised concerns, including cramped spaces, lack of ventilation, risk of fires, and safety and security of the occupants.

Sen. Loren Legarda weighed in on the matter and said that if the government aimed for a resilient recovery, the structural integrity of homes, buildings and other structures “should not be compromised.’’

“We need to rebuild communities with the confidence that we are not rebuilding the risks again. We need to ensure that construction of homes, even the temporary shelters, will be on safer ground following sound construction standards,’’ said Legarda, chair of the climate change committee.

After all, Yolanda has become the new benchmark for disaster prevention, and the country should raise the standard for building structures, she said.

On top of concerns on the substandard bunkhouses, Lacson said he has begun investigating the possible collusion between contractors and a local politician to profit from the construction of bunkhouses. With a report from TJ Burgonio, Philippine Daily Inquirer