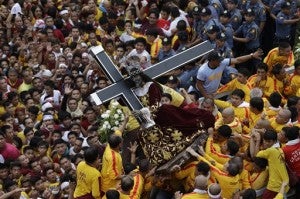 MANILA—The Philippine Coast Guard is to deploy a contingent of more than 100 men during Thursday’s feast of the Black Nazarene to secure Manila Bay, the Quirino Grandstand on Rizal Park as well as Jones Bridge across the Pasig River, a Coast Guard spokesman said Tuesday.

Cmdr. Armand Balilo, chief of the PCG’s Public Affairs Office, said the agency would field four small patrol boats and 10 rubber boats for the “special operations” related to the traditional feast and procession.

Balilo said that Coast Guard medical teams, composed of auxiliaries or volunteers, will also be on hand to help handle emergencies during the procession, which is expected to draw at least 12 million devotees this year.

An estimated nine million devotees participated in the Jan. 9, 2013 procession, which traversed the three-kilometer route from Rizal Park to Quiapo church in nine hours.

The Metro Manila Development Authority said more than 200 rescuers and medical personnel would handle emergency and rescue operations during this year’s feast. They would augment the 3,000 policemen and other security personnel assigned by local government units to assist devotees during the procession.