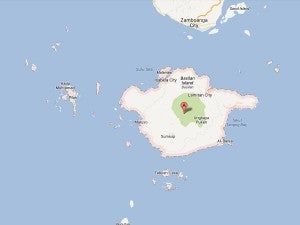 ZAMBOANGA CITY – The military confirmed on Tuesday that two civilians were injured when a helicopter gunship strafed a suspected Abu Sayyaf lair in Al-barka, Basilan.

Col. Carlito Galvez, commander of the Army’s 104th Infantry Brigade, said the military was operating against the bandit group when the incident happened.

He did not provide details except to say that the injuries the civilians sustained “were not serious.”

“We had them treated,” Galvez added.

The Mindanao Human Rights Action Center (Minhrac) earlier said some 70 students at a madrasah (Arabic school) in Al-barka were having a picnic on the island of Kalang Sibubung around 3 p.m. on January 5 when they were fired upon by a helicopter gunship.

Minhrac said the air strike lasted for about 30 minutes and that the students and other people on the island scampered for safety.

The air strike, it added, stopped only when Minhrac volunteers stationed in Lamitan City called up the military.

“Two civilians, one is a 12-year-old boy and the other is an 18-year-old female, were wounded in what the victims and witnesses say was an air strike by a helicopter of the Armed Forces of the Philippines (AFP). The victims are residents of Cambug, Al-barka, Basilan,” Minhrac said in a statement.

The rights group said the victims were “taken to St. Peter Hospital in Lamitan City for emergency medical treatment.”

Victim Julia Haron, 18, remains in the hospital while the boy has been discharged from the hospital, Minhrac said.

“According to the parents of the students, their children were traumatized by the incident,” the rights group said. With a report from Allan Nawal, Inquirer Mindanao