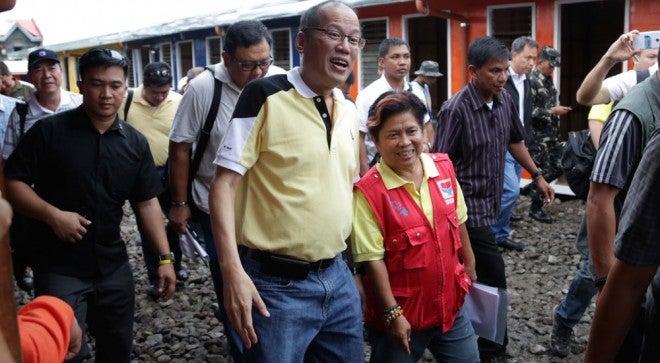 President Aquino, center, inspects a temporary shelter for typhoon victims during his visit to Tacloban city, on Dec. 22, 2013. Allegations of overpricing and substandard work have raised fears that the entrenched pork barrel system that spawned the alleged P10-billion Janet Lim-Napoles racket exposed by whistle-blowers last July is again rearing its ugly head in this early stage of reconstruction following the most violent typhoon to hit this country. AP PHOTO/ACHMAD IBRAHIM

The construction of bunkhouses as temporary shelters for families of homeless typhoon victims has raised questions about the direction and integrity of the government’s rehabilitation and recovery program.

Allegations of overpricing and substandard work have raised fears that the entrenched pork barrel system that spawned the alleged P10-billion Janet Lim-Napoles racket exposed by whistle-blowers last July is again rearing its ugly head in this early stage of reconstruction following the most violent typhoon to hit this country.

At least 203 bunkhouses—each unit divided into 24 rooms that would house as many families—are being built in more than a dozen towns in Leyte and Eastern Samar, according to the Department of Public Works and Highways (DPWH).

Each room measures 8.64 square meters—roughly the size of two Ping-Pong tables—to be occupied by one family, said a DPWH paper, “shelter and reconstruction action plan.” The average size of a Filipino family is five, but in many cases there are as many as 10 individuals in one household.

A report by an international shelter group assisting the government in its relief efforts said the bunkhouses being developed by the DPWH in areas devastated by Supertyphoon “Yolanda” (international name: Haiyan) were “noncompliant in many respects with internationally recognized standards and best practices.”

The report by the Camp Coordination and Camp Management (CCCM) group raised concerns ranging from cramped spaces to lack of ventilation, risk of fires and safety and security of occupants.

Field officers of the CCCM, involved in shelter programs in countries wracked by civil strife and natural calamities, have quietly discussed with municipal authorities apprehensions at the lack of privacy in rooms separated by thin plywood walls and sexual molestation of children while their parents are away trying to eke out a living.

At the very least, consultations with the potential occupants have been suggested.

While “protection issues” are the main concerns of the international workers, local authorities are worried about the potential for corruption in the government’s reconstruction and recovery initiatives in the ruined communities.

One issue is the soundness of constructing temporary quarters nearly two months after Yolanda struck on Nov. 8, after the emergency had passed, rather than getting people back on their feet and building permanent shelters instead.

The most powerful storm to make landfall in history killed more than 6,100 people with winds of 315 kilometers per hour and tsunami-like storm surges, affected 14 million people, and made homeless 4 million of them.

Providing permanent shelters, along with livelihood, is an important first stage in the reconstruction, according to experts interviewed by the Inquirer.

The 15-page CCCM cluster report could be telling. Politicians and priests in Leyte and Samar are worried about reports that a 24-room bunkhouse is being constructed at a cost roughly below P200,000 and not P959,360—the price tag put on it in the DPWH plan.

The nearly P1-million expense in the DPWH “individual program of work” for each of the 11 bunkhouses now undergoing construction in Tacloban City, for example, includes such amenities as four toilets, two bathrooms and a common kitchen.

In at least one municipality in Eastern Samar, however, some of the bunkhouses do not have toilets, baths or kitchen.

A report by the municipal engineer of this town, sent to former Sen. Panfilo Lacson, point man of the Aquino administration’s rehabilitation efforts, detailed failures of private contractors of the DPWH to comply with specifications of the department.

For example, this engineer said that while the DPWH specification on roofing was 0.50 millimeter, a 0.30 mm or 0.40 mm sheet was used in some of the bunkhouses; a 6 mm thick plywood wall specified was replaced with a thinner 3/16; instead of a 3/4 plywood for flooring, a 1/2 plyboard was employed.

A government engineer in Manila said in a cost estimate that without the toilets, baths and kitchen and simply coming up with the dwelling, direct cost using coco lumber, ordinary plywood and GI sheets would be P170,075.

A simple thatched hut could be built with this amount, according to experts.

Both engineers spoke on condition of anonymity because they had no authority to talk to reporters.

Rolando Asis, DPWH director for Eastern Visayas, insisted in an interview in Tacloban that the department’s specifications were being complied with faithfully and that mayors had agreed to the project, especially for informal settlers.

He said that bunkhouses were being built by private contractors outside the affected region and that the costs were in fact lower. He said a similar shelter for victims of Tropical Storm “Sendong” (international name: Washi) in Mindanao two years ago cost P1.2 million.

“They’re just breaking even,” Asis said, pointing out that materials were coming from outside the affected region—from Manila, Davao and Cebu—and that this accounted for the high expense. He said even laborers were being imported. “They are just trying to help.”

In one Eastern Samar town, however, the Inquirer has learned that at least six private contractors were local residents. One of them is an officer of the Commission on Elections who did not have the capacity to cough up the P1-million investment for a single bunkhouse project. The six are neither engineers nor contractors.

The Inquirer was told that the contractors were recommended by an administration politician and that their selection stemmed from traditional practice in the lawmakers’ pork barrel system—the Priority Development Assistance Fund—that has been roundly condemned following allegations that funds meant to ease rural poverty had been diverted to ghost projects and kickbacks. This meant the DPWH contractors needed the blessing of the local political kingpin.

One town mayor, who likewise spoke on condition of anonymity for fear of being left out in the reconstruction process, said he had not been told how long the temporary structures would remain and when permanent shelters would be built.

The selection of relocation sites is a major problem. The government has announced that construction of houses will not be allowed within 40 meters of the coastline, reckoned at high tide.

That would require national legislation given the vulnerability of coastlines to violent storms in the era of climate change. In some towns, impatient mayors are pushing ordinances to enforce no-build zones.

Not pigs in a pen

Management of the bunkhouse sites could be a major problem at the turnover by the private contractors, unless ironclad guarantees are arranged for the security and well-being of the occupants.

“It’s not a simple case of dumping pigs in a pen,” the mayor said.

For some people uprooted, like Ailyn Ambid, 25, anything anywhere is better than the ramshackle hut where she is staying at Barangay 88, near the Tacloban airport. There, she lost her husband and three children to Yolanda.

“This place has many bad memories. I would rather move out and get on with my life,” she said, adding that she had no qualms moving to the bunkhouse in the city.

Francisco Bandaje Jr., a 35-year-old father of seven, would rather stay and rebuild his home at the barangay. He works as a driver at the airport.

Disclosure of potential irregularities comes amid a request by the United Nations for a $791-million assistance for the government’s rehabilitation and recovery plan for the Yolanda-wrecked regions.

While Public Works Secretary Rogelio Singson has impeccable credentials as a clean and honest manager, concerned municipalities are worried that he may not be aware of what is happening on the ground.

Calls for transparency have been aired by ambassadors of donor countries. Last month, the envoys went on a tour of the typhoon-affected areas, accompanied by Social Welfare Secretary Corazon “Dinky” Soliman and the UN humanitarian coordinator in the Philippines Luisa Carvalho.

At the end of the tour in Ormoc City, Ambassador Neil Reeder of Canada, echoing the sentiments of the diplomats, said: “The next six months into the new year is a very critical window as you transition into the reconstruction phase beyond the immediate needs … . We want to have an open, transparent process.”