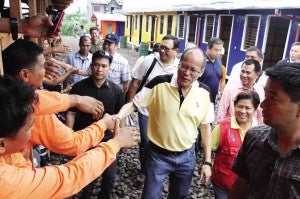 President Aquino inspects the construction of bunkhouse units in Bliss Kalanipawan during his visit to Tacloban City on Dec. 22, 2013. In the background are the completed bunkhouses. PHOTO COURTESY OF PUBLIC INFORMATION AGENCY REGION 8

TACLOBAN CITY—The government wants to build permanent houses that are safe for residents and in the meantime, the bunkhouses are there for  temporary use only, President Benigno Aquino III said in a speech in Palo town, Leyte province, after visiting the structures built by the government for the survivors of Supertyphoon “Yolanda” (international codename: Haiyan).

“You might ask why these are just bunkhouses or temporary houses … We want to ensure first that the areas where we will build the permanent houses are safe,” the President said in a speech.

Two bunkhouses, composed of 24 units each, were turned over to 48 families in Barangay (village) Candahug, located some 3 kilometers from the town proper.

The Department of Public Works and Highways (DPWH) plans to build 203 bunkhouses in Eastern Visayas, according to DPWH Region 8 Director Rolando Asis.

Each bunkhouse costs P838,000 and is made of corrugated sheets, plywood and coconut lumber. It measures 8.64 square meters, with a common bathroom and kitchen.

Asis said the cost of each bunkhouse was high because the construction materials had to be brought in from Cebu and Davao provinces. The workers also came from outside the region, he added.

The President said he would see to it that the next permanent relocation sites of the people rendered homeless by the typhoon would be better and more resistant to calamities.

“We will not allow those who will start a new life to face the same danger and uncertainty. We want to ensure that you will live in safe houses where you can build your dreams,” the President said.

Asis admitted the bunkhouses were not the typhoon-resistant type but gave the assurance that the government was committed to providing permanent shelters to the homeless survivors.

He said the residents of the bunkhouses were expected to live there for six months at most, after which they would be given permanent relocation, the site of which would be determined by the local government unit concerned.

The President, meanwhile, promised that the people of Eastern Visayas could still expect assistance from the national government.

So far, he said, the national government had poured P2.6 billion in relief assistance, helped more than 200,000 families and provided three million food packs to the affected families in the region.

The President and Tacloban City Mayor Alfred Romualdez met for the first time since they engaged in a blame game over who should be responsible for the absence of the government in the city days after it was ravaged by Yolanda.

The meeting was brief but cordial.

The meeting occurred when the President made a quick visit to Barangay 62-B here to inspect the government-funded bunkhouses for homeless typhoon survivors.

The President inspected the bunkhouses, of which 11 of 17 were ready for occupancy, when Romualdez, accompanied by his cousin, Leyte Representative Ferdinand Martin Romualdez, approached him and told the President that he appreciated the assistance extended to his city by the national government.

The President, however, did not linger and left barely 10 minutes after he arrived, and proceeded to Palo to inspect another set of bunkhouses and meet with local leaders, including former Leyte governor and now Energy Secretary Jericho Petilla, who are his political allies.

Mayor Romualdez declined to issue any statement about his brief meeting with the President.

Unlike the quick trip to Tacloban’s bunkhouse site, the President stayed for over 30 minutes in Palo and led in the giving of the certificates of occupancy for the 48 families who would be first locators to the bunkhouses built in Candahug.

The President was also met in Palo by the beneficiaries of the bunkhouses for the town.