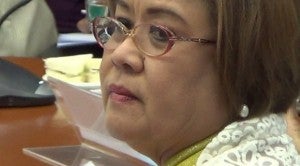 Even the National Bureau of Investigation (NBI) has no answer, saying it has hit a blank wall in its hunt for the Goliath of rice smuggling in the country.

Justice Secretary Leila de Lima on Friday said the NBI had no lead since the Senate recommended 10 months ago that the Department of Justice investigate the rice smuggling syndicate allegedly led by David Tan.

Tan is allegedly one of the financiers of bogus cooperatives that cornered a huge chunk of the National Food Authority’s rice imports under the Aquino administration.

A former Bureau of Customs (BOC) official told the Inquirer recently that Tan had given as much as P6 billion in payoffs to officials and employees of the bureau who facilitated the smuggling of imported rice through the ports over the last two years.

Commenting on Sen. Ralph Recto’s statement published in the Inquirer on Friday that the Department of Justice and the NBI failed to act on the Senate’s recommendation to go after Tan, De Lima said the NBI opened an investigation but temporarily closed it after the agency failed to establish the identity and whereabouts of Tan and “Danny Ngo,” another financier of the rice-smuggling operation.

“No one among the members of the alleged cooperatives was willing to cooperate,” De Lima said.

“Not even the search of our files of all persons with the name David Tan provided positive information,” she said, quoting from the NBI investigative report.

She said the NBI invited representatives from 24 cooperatives in the search for Tan and Ngo.

She, however, did not say which of the cooperatives identified in the Senate investigative report were nonexistent.

The representatives of the cooperatives that responded to the NBI summons “professed lack of knowledge” about Tan and Ngo, she said.

In a 42-page joint report of five committees that was signed last February, the Senate said: “The committees found that there is sufficient basis to conclude that financiers are behind the anomalous transactions, and the testimony and documents obtained in the hearings establish without a doubt that these financiers exist and have employed dummies to rig the bidding process. It is now the task of the Ombudsman, Department of Justice and the National Bureau of Investigation to pursue them beginning with Mr. Danilo Garcia, Mr. Willy Sy, a certain ‘Danny Ngo’ and  ‘David Tan.’ These financiers and their accomplices must be unmasked and if warranted, the necessary charges must be filed against them.”

In a text message to the Inquirer, De Lima said: “We will be meeting with the NBI today. Will direct them to reopen the probe on that and discuss ways on how to move forward and achieve significant results. If need be, we will reorganize and or enhance the team composition.”

Malacañang confirmed that the justice department had opened an investigation into the rice-smuggling syndicate. Asked about it by reporters, deputy presidential spokesperson Abigail Valte repeated the information given by De Lima to the Inquirer, noting that the names Dante Tan and Danny Ngo were “common.”

Inquirer sources gave conflicting accounts on who David Tan was.

A former BOC official claimed he was a Chinese-Filipino businessman in his mid-30s engaged in the automotive spare parts trade.

A local rice trader claimed Tan was a junk shop operator who was the culprit behind the massive hoarding of old Philippine coins (with high metal content) for shipment to China.

A government official claimed that the alias was used by three different persons on the same team.

Another source said Danny Ngo was a rival rice importer but his transactions were just a fraction of what David Tan handled.

In the Senate inquiry, David Tan emerged as the main financier of 26 farmers’ cooperatives and single enterprises that acted as dummies or fronts to obtain import licenses from the NFA.

According to the Senate report, the tentacles of Tan appeared to extend beyond the BOC, as the bogus enterprises used in the NFA biddings were registered with the Department of Trade and Industry (DTI) on the same date and their NBI clearances also carried the same date.

The Senate committee report showed that not only were they undercapitalized so that they could not pay the hefty bidding requirements (P50 million to P60 million each), but some of them were also found to have given fake addresses in their DTI registration papers.

Except for the cooperatives, all of the DTI-registered enterprises were not operating, according to the Senate report.

The Senate joint investigation held 11 hearings and one executive session from September 2012 to January 2013.

The Senate tagged Elizabeth Faustino as the broker or handler of the farmers’ organizations and cooperatives and “the contact person or the middleman to the alleged next level broker,” the late Nixon Kua.

A former journalist and tourism official, Kua died on July 23, 2012, a day after being shot in the face in a robbery in Laguna province.

“Ms. Faustino recounted that it was also Mr. Kua who provided them the money for the payment of the bid form, as well as the service fees. However, since Mr. Kua was murdered in his residence, this allegation can no longer be investigated,” the Senate report said.

Faustino was also accused of preventing the farmers from attending hearings.

“Her actions are highly irregular and questionable and it is a compelling indication of their unwillingness to cooperate with the investigation. Had they not been issued arrest warrants, they would have continued to defiantly disobey the lawful orders of the committees and ignore the investigation being conducted by the committees,” the report said.

Bayani of St. Andrews Field Grains and Cereals Trading, who was detained by the senators for refusing to answer questions during the hearing, pointed to Danilo H. Garcia, allegedly the head of a rice dealers’ group south of Metro Manila, as his financier.

Eight of the dummy firms tagged Willy Sy of Montevallo Enterprises as their go-between to the financiers.

The dummy importers got P5 for every bag of rice they won in the bidding of which P1.50 went to brokers like Faustino and Sy.

The dummy importers got their kickbacks after assigning their import contracts to the financiers through a special power of attorney or a deed of assignment.

“Based on the testimonies of the representatives of the farmers’ cooperatives and the traders who acted as dummies for financiers, more or less a billion pesos was made readily available to effect the rigging of the bidding process,” the Senate report said.

According to the report, NFA Deputy Administrator Jose Cordero admitted during the hearing “that SPAs or deeds of assignment were submitted to them in order that import permits/memoranda of undertaking could be issued to other persons as they (NFA) knew that that these people would seek the help of financial partners.”