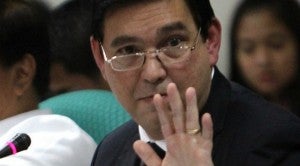 As early as February this year, senators investigating the existence of a rice smuggling cartel in the country identified “David Tan” as one of the financiers who bankrolled the syndicate of bogus cooperatives and enterprises that cornered a hefty chunk of the National Food Authority’s (NFA’s) rice imports under the Aquino administration.

But Sen. Ralph Recto was disappointed that the Department of Justice and the National Bureau of Investigation failed to act on the Senate investigative committee’s recommendation to go after Tan, who had reportedly given as much as P6 billion in kickbacks to customs officials and employees who facilitated the entry of his shipments of smuggled rice over the last two years.

“I will ask the Senate ways and means committee to take another look into the rice smuggling issue when Congress resumes next month. I’m disappointed that apparently no action has been taken on our recommendations to prosecute the public and private persons involved,” Recto said in a phone interview on Thursday.

A Senate joint committee led by former Sen. Francis Pangilinan, Senate President Franklin Drilon, Sen. Teofisto Guingona III, former Sen. Manuel Villar and Recto recommended that Tan, a certain “Danny Ngo,” Danilo Garcia (head of a rice dealers’ association in southern Metro Manila) and Willy Sy (owner of Montevallo Enterprises, allegedly a bogus cooperative) should be prosecuted for corruption; violation of Sections 101 and 3601 of the Tariffs and Customs Code of the Philippines, and of Republic Act No. 1956, which amended Article 186 of the Revised Penal Code on monopolies and combinations in restraint of trade, against the suspected financiers and operators of the rice cartel.

A former Bureau of Customs (BOC) official claimed that David Tan was designated point man of the rice smugglers two years ago to centralize  smuggling transactions in the agency.

The former BOC official said Tan gave P1,000 to P20,000 in kickbacks for every 6-meter, or 20-foot equivalent unit (TEU), container of smuggled rice brought into the country.

The 43-page report signed by the senators on Feb. 6 said: “The committees found that there is sufficient basis to conclude that financiers are behind the anomalous transactions, and the testimony and documents obtained in the hearings establish without a doubt that these financiers exist and have employed dummies to rig the bidding process.

“It is now the task of the Ombudsman, Department of Justice and the National Bureau of Investigation to pursue, beginning with Mr. Danilo Garcia, Mr. Willy Sy, a certain ‘Danny Ngo’ and ‘David Tan.’ These financiers and their accomplices must be unmasked and if warranted, the necessary charges should be filed against them.”

The report was approved in plenary session and forwarded to Justice Secretary Leila de Lima for immediate action.

Ten months after, the justice department and the NBI have yet to announce any action on the Senate’s recommendation.

De Lima did not reply to the Inquirer’s call or text messages.

The Senate conducted 11 hearings and one executive session over four months beginning September 2012 to investigate the existence of the rice smuggling cartel.

The Senate found that these cooperatives were “dummies” or fronts for Tan and his gang, as the groups did not have the resources to pay the service fees ranging from P50 million to P60 million; used the same bank branches; their documents with the NBI and the Department of Trade and Industry were made on the same date; and only suppliers gave certifications that they could supply the rice-import award.

“Based on the testimonies of the representatives of the farmers’ cooperatives and the traders who acted as dummies for the financiers, more or less P1 billion was made readily available to effect the rigging of the bidding process,” according to the committee report.

The Senate also recommended that graft charges be brought against former NFA Adminstrator Lito Banayo, his former chief of staff Gilberto Lauengco and six other NFA officials  because the NFA “very well knew that the participants (in the Private Sector Financed Importation Program) do not have the financial nor the technical capability to import rice.”

Garcia and Sy were identified as mere brokers for the financiers of the rice imports.

Some of the cooperatives dealt mostly with Garcia and Sy through Elizabeth Faustino, who was also recommended for prosecution for graft and other criminal liabilities.

Based on their dealings, the cooperatives were promised P5 in commission for every bag they won in a bidding from the NFA. For example, they got P1 million from a 10,000-metric-ton import quota allocation.

Rice imports are strictly restricted in the country and levied a 40-percent duty to protect farmers.

Only 350,000 MT of rice are allowed to be shipped into the country (under the minimum access volume and country specific quota), which the NFA distributes equally to qualified importers.

“The government policy of private sector participation in  rice importation can and had been used by financiers and big rice traders to corner or get hold of big rice import allocations using farmers’ organizations and cooperatives and private entities by convincing or paying them to bid and transfer their rights over import allocations awarded to them,” the committee report said.

A former lawmaker, who requested anonymity, said the Senate committee report contained enough leads, including the names of the bag men and illicit traders, for the justice department and the NBI or the police to pursue if they really wanted to find the culprits.

The former lawmaker said that David Tan’s group took some of the farmers in the probe to safe houses to prevent them from testifying.

The lawmaker also believed that the syndicate could be in cahoots with the DTI and the NBI because the papers of the dummy cooperatives were processed in just one day.

The testimony and documents submitted by the BOC, NFA and the Department of Trade and Industry to the investigative committee strongly indicated “the existence of a rice cartel that involved government officials who allowed transactions to be consummated regardless of the irreparable injury it would cause to the government.”