Aquino seeking peace and quiet in ‘City of Pines’ 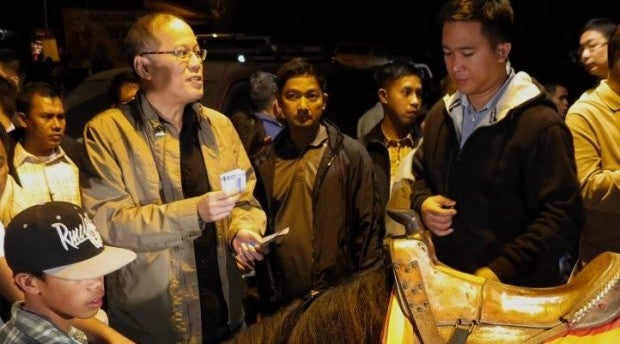 Will he ride a horse this time? In a photo taken during his holiday break last year, President Benigno Aquino III hands P500 to “pony boy” Melchor Baraquio, who rents out horses at Wright Park in Baguio City, as payment for a horse that Secretary to the Cabinet Jose Rene Almendras rode. EV ESPIRITU/INQUIRER NORTHERN LUZON

President Benigno Aquino III on Friday began his three-day vacation in search of “peace and quiet” after a year of “overlapping disasters.”

Mr. Aquino is vacationing in the mountain resort city of Baguio where, according to Communications Secretary Herminio Coloma, he will spend “quality time” with people close to him.

“Finally, [the President] is able to heed Dr. Enrique Ona’s long-deferred wish of seeing him take time to relax in an off-work setting after a series of overlapping disasters,” Coloma said.

Ona, the secretary of health, had prodded the President to take some rest—if possible, once every three months—as the problems of the country and other concerns of the presidency were taking a toll on his health.

Mr. Aquino personally dealt with a series of disasters this year, among them the attack on Zamboanga City by rebels from Nur Misuari’s faction of the Moro National Liberation Front in September, the 7.2-magnitude earthquake that caused great devastation in Bohol, Cebu and Siquijor provinces in October and the disaster brought by Supertyphoon “Yolanda” (international name: Haiyan) in the Visayas last month.

The President is expected to arrive in Baguio on Saturday but there was no confirmation from Malacañang on Friday whether he would lead the commemoration of Rizal Day there on Monday.

Some Cabinet members and relatives will be with the President during his vacation.

Mr. Aquino also went up to Baguio during the Christmas season last year.

“Knowing the President, he will take advantage of the fact that he has some peace and quiet, but he will still take calls, of course. He will insist on continuing to get updates [from government officials], especially after the [holiday] break,” deputy presidential spokesperson Abigail Valte said.

One or three days?

“We’re expecting the exodus [of Metro Manilans] for the New Year weekend beginning later this [Friday] afternoon and their return will be on Jan. 1, beginning in the morning. So knowing the President, he will insist on continuing to get updates from [the agencies],” she said.

The President’s decision to take a much-needed break from his official duties was initially marred by confusion arising from the advisories sent out by two Malacañang press officers.

On Dec. 23, presidential spokesperson Edwin Lacierda sent out an advisory through the official mobile phone of the Palace Communications Group that said: “Upon the recommendation from Sec. Ike Ona, the President will take a break from work starting Dec. 27. His break from work will be for the duration of the holiday except he will interrupt his break to pay tribute to Jose Rizal.”

Lacierda’s advisory was followed by another, sent out 30 minutes later by Coloma, which read: “Upon Secretary Ona’s persistent recommendation, the President will take a one-day leave from work on Friday, Dec. 27. He will perform his official duty on Rizal Day, Dec. 30.”

When the Inquirer sought clarification, Coloma said both advisories were correct. The one-day leave pertained to Dec. 27, he said, as there is no need to file for a leave during weekends when government offices, including the Office of the President, are closed anyway.

If he had his way, Ona would send the President to a weeklong leave once every three months.

“From what I understand… from our discussions, he’s (Ona) always been saying that it would be ideal—[a week’s rest] every quarter [would be ideal],” Valte said.

“[But] that is a luxury that the President does not have, so he will be OK with three days,” she said.

A change of scenery would be good for the President, she added.

Asked if the President, whose bouts of coughing interrupted his speeches in recent weeks, would be undergoing a medical checkup, Valte said: “I would have to ask him. The President gets regular and periodic checkups … He has a schedule for that.”