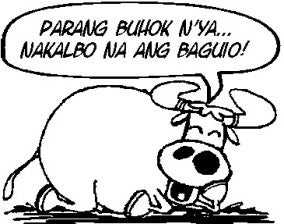 BAGUIO CITY—Unlike his predecessor who would come to Baguio any chance she got, President Aquino rarely finds time to visit the summer capital.

On Sunday, when he led the Baguio leg of the Team PNoy campaign at Melvin Jones Grandstand in Burnham Park here, the President finally told the city residents why.

While  still a boy, Aquino recalled telling his father, the late Sen. Benigno Aquino Jr., to turn off the air conditioner when they were dining at a restaurant on Session Road. The older Aquino had told him there was no air conditioner around, just open windows.

“So, that’s when I learned about the  ‘aircon’ of Baguio,” he said.

The President said he began to recall his Baguio trips on Saturday when he arrived in the city for the Philippine Military Academy graduation scheduled for the next day.

He said he noticed that fog had started to cover the Mansion, the Philippine president’s official summer home.

“[A traveler] would know you are near [Baguio] when you smell the pine trees. The mountains were full of flowers and they were green. Now they are full of houses,” he said.

Aquino said he had good memories about the city. He waxed nostalgic about Crystal Cave, Teachers’ Camp, Burnham Park, Kennon Road and the Baguio longganisa (sausages).

“It was my favorite [meal] for breakfast, then it extended to lunch then to dinner. May take home pa,” he said about his craving for longganisa.

Aquino said he used to go to Crystal Cave as a boy, and his group would be handed torches to see the stalactites and stalagmites.

“We were often at the end of the line. So, when we looked up at what the tour guide had pointed at, the line had already moved on,” he said.

When he returned years later as a senator, Aquino said he discovered many tour guides and no stalactites and stalagmites.

He said the country could promote tourism only “if tourists have spots to see.”

“What if there’s nothing to see anymore?” the President asked the crowd.

Part of the solution to reaching the tourism target is to ensure that the provinces have electricity, the President said.

He said the administration of former President Gloria Macapagal-Arroyo reported that 99.98 percent of the country had been supplied with electricity.

“We were deceived,” he said.

The President said this was because what the previous administration had fulfilled was to connect the barangay (village) hall to the Luzon power grid.

When a sitio (sub-village) of a barangay was electrified, it was listed as the whole barangay in the electrification report of the Arroyo administration, he said.

When he assumed office in 2010, Aquino said 36,000 sitios still needed to be provided with electricity, which would cost the government P1 million per sitio. A total of 7,200 sitio now have power, 118 of these in Benguet, he said.