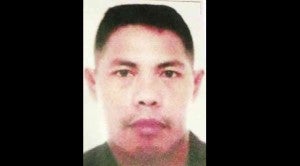 MANILA, Philippines – Exactly a week after Labangan, Zamboanga del Sur Mayor Ocol Talumpa and three others were killed at the Ninoy Aquino International Airport in Pasay City, the investigating police task force has filed murder and frustrated murder charges against the suspected gunman and two cohorts.

The complaints were received on Friday by Pasay Assistant Prosecutor Orlando Mariano at the Naia Terminal 3 where the victims were gunned down.

On December 20, Talumpa’s group of 12 had just arrived in Metro Manila for a vacation when they were ambushed at the loading bay outside the arrival area by two men on a motorcycle.  The mayor, his wife and nephew Salipudin died due to multiple gunshot wounds. Phil Thomas Lirasan, a one-year-old boy whose family was standing nearby, also died when the gunmen sprayed the victims with bullets. Five others were wounded—two from the Talumpa family and three from the Lirasan family.

Some of the mayor’s staff, who were with him when he was ambushed, later identified  Amlong as the gunman, according to Pasay police investigation section head Chief Insp. Joey Goforth.

Rayam, who was with her lawyer during the press conference, also made other statements that implicated Nandang. “In May 2013, [my father] won as mayor, defeating Wilson ‘Kitty’ Nandang. This crime is really because of politics and [my father’s] campaign against illegal drugs,” she said.

“Nandang filed an election protest against my father. But when they saw that my father hadn’t cheated, they abandoned the case. Maybe this is their way to reinstate themselves in our area,” she added.

According to her, Nandang had always been implicated in previous attempts on her father’s life since the latter won as Labangan vice mayor in 2010 on a campaign promise to wage war on illegal drugs.

National Capital Region Police Office chief Director Carmelo Valmoria clarified that while the family had their own opinions about the case, “we are still investigating if there are other people involved. We don’t want to speculate. It won’t hold water in court. Based on our pieces of evidence and witnesses, the only identified suspect is the gunman.”

Goforth also clarified that the testimony of witnesses were “not enough evidence” to conclude that Nandang was involved in the crime. “Of course, we’re not discounting that he’s the mastermind but we believe we should get more testimonial and physical evidence,” he said.

Meanwhile, Rayam also expressed resentment against the management of Naia, saying: “We see complacency. Mama and Papa always went on vacation [in Metro Manila]. Papa always has his escorts but this is the first time it took them a long time to retrieve their firearms” at the airport.

Goforth said that before he was ambushed, Talumpa had asked his four security escorts  to retrieve their firearms at the police depository booth located at loading bay 1 after the group retrieved their luggage at 11:15 a.m.

Rayam said her father had gone out to the loading bay to see what was holding up his escorts. “From what I’ve been told, there was no one to release the guns. Only a security guard was there. They had to wait because only the police can release firearms,” she added.

“My father wouldn’t have stepped out if the escorts came back quickly,” Rayam pointed out.

Beltran said they were currently looking for Amlong and the two suspects not only in Metro Manila but also in the provinces. A wanted poster of Amlong has been prepared with informants asked to call 0921-7623100 or 8318070.