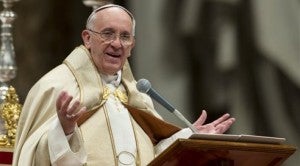 VATICAN CITY — Pope Francis has turned around the way the Catholic Church is seen but his promise of Vatican reform awaits next year and key problems remain, observers said on Tuesday, as the pontiff celebrated his 77th birthday.

After years of stagnation and turbulence, the first ever Latin American pope has brought a down-to-earth style to the papacy and has shown a willingness to tackle problems like the Vatican’s secretive finances.

Francis has also established himself as a global voice on the side of the dispossessed with his critique of unfettered capitalism — earning the label of “Marxist” from conservative commentators in the United States.

In terms of the Vatican’s sluggish view of time, he has moved quickly in his first months, installing a council of world cardinals to advise him and calling for a less “Vatican-centric” kind of Church with more power for local bishops.

He has accumulated over 10 million followers on Twitter under the @pontifex handle, nearing rock star popularity, and has been named “Person of the Year” by Time magazine.

The change of mood has been all the more remarkable given the strife in the Church before his election, including outrage over child sex abuse scandals and divisions between the Vatican and local churches.

Those issues are far from gone away, however. And analysts warn that progressives in the Church hoping for a raft of reforms of Catholic teachings will be disappointed.

Francis remains a moral conservative, although a compassionate one, who is virtually certain to stick to doctrine on hot-button issues like abortion or contraception, or priestly celibacy and women priests.

Even the pope’s widely-praised comment about gay people — “Who am I to judge?” — is seen as showing tolerance but unlikely to alter the Church’s fundamental condemnation of homosexual acts as a sin.

“Exaggerated expectations will necessarily lead to new disappointments,” German cardinal Walter Kasper was quoted as saying in a new biography of the pope by Rome-based Argentine journalist Elisabetta Pique.

“The new pope can renew the Church but he cannot invent a new Church,” Kasper said, adding that progressives and conservatives alike would be “disappointed.”

Aside from memorable phrases like his call for a “poor Church for the poor,” there have in fact been few major decisions taken by Francis in his first nine months that allow for a deeper analysis of his intentions.

Francis has begun consultations on reforming the Vatican administration and the Vatican’s scandal-tainted bank, the Institute for Works of Religion, and has set up a committee on child abuse.

About to tackle scandals of child sex abuse

On the issue of abuses and cover-ups by Catholic clergymen dating back decades, which continues to anger many Catholics and non-Catholics alike, two events next month could give an indication of the pope’s direction.

One will be the assembly on January 8 of the Legion of Christ, a troubled conservative religious order whose late founder Father Marcial Maciel was discovered to be a sexual predator who molested seminarians and fathered three children despite taking a vow of chastity.

The order has been put under Vatican tutelage as more abuse cases have emerged, but there have been internal tensions over its future ahead of the meeting, when the Vatican will have to show what it intends to do.

Then on January 16, Vatican representatives will travel to Geneva to testify before a meeting of the United Nations Committee on the Rights of the Child over its handling of abuse cases after saying it was not legally competent over the actions of individual clergymen.

Seen trying to do too much?

Some experts believe Pope Francis may be trying to do too much and creating confusion among Catholics with his multiple interviews and ad lib speeches.

He added that the pontiff’s style had led to “misunderstandings and over-the-top expectations.”

And while his public image is that of a kindly parish priest, Vatican gossip is that he can be sometimes be brusque and authoritarian behind the walls.

With the pope’s popularity growing among many non-Catholics too, Vatican spokesman Federico Lombardi expressed concern in a rare critical moment that the focus on him could draw attention away from the message.

At a recent book presentation, he was quoted by Vanity Fair Italy as saying: “The extreme concentration of attention on Francis creates a communication problem.”

Pope Francis is Time magazine’s person of the year