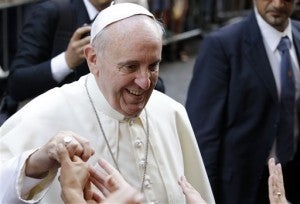 Pope Francis bid farewell Tuesday to the Vatican’s No. 2, Cardinal Tarcisio Bertone, who was blamed for many of the gaffes and problems of the papacy of Benedict XVI. And at a ceremony inside the Apostolic Palace, Francis welcomed his new chief collaborator, Archbishop Pietro Parolin, a career diplomat who was sent from the Holy See to Venezuela during Bertone’s tenure.

The handover represented a tangible sign of change for the Vatican following Bertone’s scandal-marred term, which climaxed with the 2012 theft of Benedict’s papers by his butler. But many other problems of Benedict’s reign — from his rehabilitation of a Holocaust-denying bishop to the Vatican’s response to the 2010 sex abuse scandal — have been pinned on Bertone.

ADVERTISEMENT
FEATURED STORIES
NEWSINFO
Man posing as Marcos spox revealed to be an inmate in Bilibid — Guevarra
NEWSINFO
Congress canvassing of votes for president, VP to begin May 24
NEWSINFO
CebuPac places pilot under disciplinary review after ‘baseless’ post vs Robredo

Read Next
Deadliest earthquakes that shook the Philippines
EDITORS' PICK
Duterte signs law giving rights, more protection to foundlings
Comelec won’t proclaim party-list groups yet
Honolulu Café is the cure for your Egg Tarts and Roastings cravings
DOJ-led panel drops 29 cases of torture, EJKs
Luxe property: A way to build, preserve wealth
House energy committee chair Arroyo bats for cheap electricity
MOST READ
Heart Evangelista gets a ‘no’ from Chiz Escudero after asking, ‘Do I deserve a bag?’
BIZ BUZZ: Flip-flopping BIR
3 Iloilo residents found with Omicron subvariant
Man posing as Marcos spox revealed to be an inmate in Bilibid — Guevarra
Don't miss out on the latest news and information.