Deadliest earthquakes that shook the Philippines 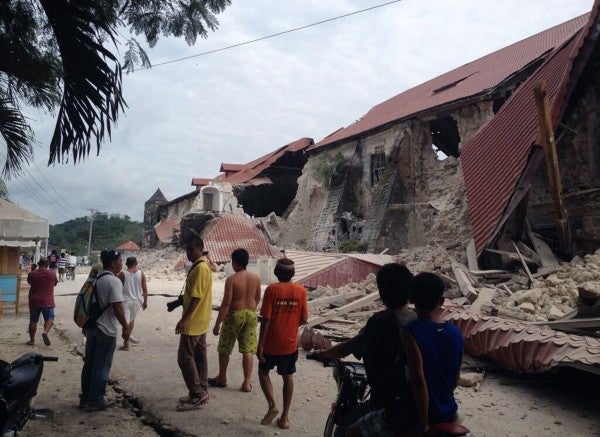 People walk past the damaged Church of San Pedro in the town Loboc, Bohol after a 7.1 magnitude earthquake struck the region on October 15, 2013. AFP

MANILA, Philippines – At least 60 people were killed while roads, bridges and centuries-old churches were heavily damaged after a 7.2-magnitude earthquake hit Bohol, Cebu, Negros Occidental and other provinces on Tuesday morning.

Philippine Institute of Volcanology and Seismology (Phivolcs) Director Renato Solidum said the major earthquake was the strongest felt in Visayas and Mindanao in the last 23 years, releasing energy equivalent to “32 Hiroshima bombs.”

Located along the Pacific Ring of Fire, the source of 90 percent of the world’s earthquakes, the Philippines has experienced a number of devastating tremors. Just last year, the United States Geological Survey (USGS) listed the 6.7-magnitude Negros-Cebu earthquake as the deadliest in 2012 with its 113 fatalities.

According to Phivolcs, among the Philippines’ most destructive earthquakes in recent history are:

1968: Casiguran – A 7.3-magnitude tremor, considered at the time as the most destructive in the last 20 years, hit the town of Casiguran, Aurora and the rest of Luzon. The six-story Ruby Tower in Binondo, Manila collapsed, killing around 300 tenants, as other major buildings in the same area were damaged. Extensive landslides and large fissures were observed in the mountainous areas while a tsunami was also recorded.

1973: Ragay Gulf – Almost a hundred houses were destroyed while 270 others were damaged in Calauag, Quezon due to a magnitude 7 earthquake. A number of other buildings, roads, railroads and bridges were damaged. The Sumulong highway bridge collapsed while PNR’s railways were “badly twisted” due to the ground movement caused by the quake.

1976: Moro Gulf – Almost 5,000 people were killed by a record 7.9-magnitude earthquake and the resulting tsunami which hit the island of Mindanao. The offshore tremor generated by the Cotabato trench caused a tsunami, said to be responsible for 85 percent of the deaths. “The sea unloaded its fury on everything near the shore. Houses and properties along the coastal beaches of Lanao del Sur and Pagadian were practically washed out. Bits of houses littered the sea and bodies littered the shore,” said the Phivolcs report.

1983: Laoag – A 6.5-magnitude tremor, considered the most severe to his north-western Luzon in the last 52 years, left 16 dead and at least 50 injured. Dozens of building were reduced to rubble while landslides affected other parts of Ilocos Norte.

1990: Bohol – Similar to the recent earthquake, a shallow seated tectonic tremor (magnitude 6.8) hit Bohol in 1990 and caused panic to the general public. It was also felt in other parts of Visayas and in Mindanao. Six people were killed, 200 injured and 46,000 displaced. With thousands of houses damaged, at least 7,000 people were rendered homeless.

1990: Panay – One of the three devastating earthquakes of 1990, the 7.1 magnitude tremor hit Panay island and killed eight people while injuring 41 others. A number of bridges collapsed while large fissures were recorded. In Aklan, a number of churches and other infrastructure were heavily damaged while 15 percent of houses in Culasi, Antique were reported damaged.

1990: Luzon – At least 1,200 people died in the July 16, 1990 earthquake (magnitude 7.7) that shook Luzon. Baguio City was among the hardest-hit as many hotels and government buildings collapsed killings hundreds in an instant. Because of landslides, the city was isolated from the rest of the Philippines. In Cabanatuan City, Nueva Ecija, buildings were also heavily damaged resulting in the death of more than 300 people.

1994: Mindoro – Tsunami caused by the 7.1-magnitude earthquake killed most of the 78 casualties from the said calamity. Affected by the tsunami were coastal areas in Baco and Calapan, Oriental Mindoro. At least 1530 houses, out of the 7566 damaged, were washed away by the tsunami.

In 2012, a 6.9-magnitude earthquake shook Negros and Cebu, causing landslides and the collapse of several buildings, resulting in the death of at least 52 people. Other reports said at least a hundred people were killed, mostly by landslides. Several bridges were also rendered impassable.