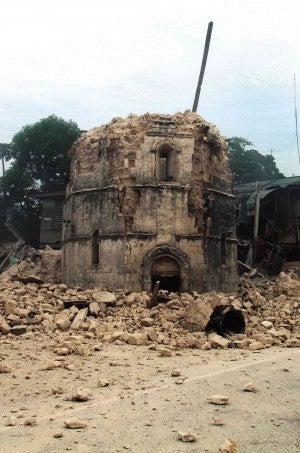 LOBOC TOWER. This is what remains of the historic Church of San Pedro tower in Loboc, Bohol province, after a major 7.2-magnitude earthquake struck the region on Tuesday, leaving scores dead and destroying churches and buildings in and around one of the Philippines’ major tourist hubs. LOBOC VICE MAYOR PABLIO SUMAMPONG/CONTRIBUTOR

An earthquake with energy equivalent to “32 Hiroshima bombs” jolted the Visayas, and parts of Mindanao and southern Luzon early Tuesday morning, causing centuries-old churches and modern buildings to crumble, disrupting power and phone services, setting off stampedes and killing at least 97 people.

The 7.2-magnitude earthquake struck at 8:12 a.m. with its epicenter at 2 kilometers southeast of Carmen town in Bohol province, known for its chocolate hills and tarsiers.

Offices and schools were closed for a national holiday—the Muslim festival of Eid al-Adha—which may have saved lives.

Bohol and Cebu have declared a state calamity as the death toll rose to 97 in the two provinces, including a 9-year-old girl who died in a stampede that broke out at the queue for the cash transfer program in Pinamungahan town, Cebu.

President Aquino will fly to Bohol and Cebu Wednesday to check on the damage caused by the quake.

“I will be going to Bohol and Cebu tomorrow, and if possible other areas. And if our assessment is there are a lot of other things that are not being taken care of, then we will reconsider the (Korea) visit. But as of this time, the things that have to be done are being done,” the President told reporters.

Senior Supt. Dennis Agustin, the Bohol police chief, reported 87 fatalities in the province based on an actual body count. At least nine others were killed in nearby Cebu province and another died on Siquijor Island, according to field reports.

Agustin said the towns of Clarin, Buenavista, Loay and Albor had two fatalities each. Tagbilaran City also had the same number of fatalities.

The towns of Getafe, Batu-an, Baclayon, Cortes and Talibon each had one fatality.

Aquino presided over an hourlong closed-door executive session of the National Disaster Risk Reduction and Management Council (NDRRMC) at the Office of Civil Defense.

Combined figures from the Bohol provincial police and the NDRRMC showed that at least 164 people were injured in the province.

The Philippine Institute of Volcanology and Seismology (Phivolcs) said the movement of the East Bohol Fault triggered the strongest quake in the Visayas in 23 years.

Phivolcs Director Renato Solidum placed the depth of the tectonic tremor at 33 kilometers.

The US Geological Survey initially reported the quake as having a magnitude of 7.2, but shortly afterward lowered it to 7.1.

By noon, Phivolcs had recorded 137 aftershocks in Carmen and Tagbilaran, the strongest of which was magnitude 4.3 at 9:37 a.m. Intensity IV was felt in Tagbilaran.

Magnitude is the measurement of the energy released by the earthquake, while intensity measures the extent of damage caused by the quake.

Many roads and bridges were reported damaged, but historic churches dating from the Spanish colonial period suffered the most. Among them is the country’s oldest, the 16th-century Basilica of the Holy Child in Cebu, which lost its bell tower.

A 17th-century limestone church in Loboc town, southwest of Carmen, crumbled to pieces, with nearly half of it reduced to rubble.

The Provincial Disaster Risk Reduction and Management Council of Bohol also received reports of damage to old churches in Loay, Clarin and Baclayon as well as the belfry in Panglao.

Photos on social media showed extensive damage not only to churches but also to modern buildings, including a university, while major roads had also been torn apart.

In the immediate aftermath of the quake, authorities were struggling to reach or contact damaged areas, with power lines as well as phone networks down, and a clear picture of the disaster had yet to emerge.

Neil Sanchez, head of the Cebu disaster management office, said authorities were trying to confirm reports that a school had collapsed, with an undetermined number of children trapped.

“Communications lines are quite difficult here. Even the disaster risk reduction management office has been damaged. We had to move elsewhere,” Sanchez said.

Businesses in Cebu were on a standstill as people rushed out of buildings, homes and hospitals.

Malls and several establishments closed down for the day to allow engineers to check on their buildings. They are expected to resume operations on Wednesday. 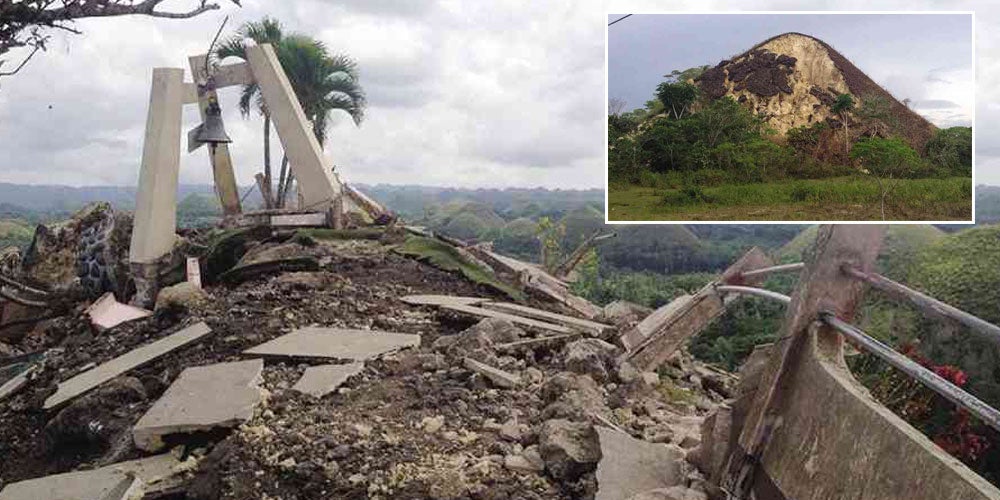 CHOCOLATE HILLS. The observation deck used to view Bohol’s famous Chocolate Hills lies in ruins after the earthquake. Inset is one of the hills. PHOTOS FROM ROBERT MICHAEL POOLE’S TWITTER ACCOUNT

Cebu declared a state of calamity and suspended classes in both private and public schools on Wednesday to allow school officials to check on the buildings.

By 10:30 a.m. on Tuesday, both airports resumed operations. John Andrews of the Civil Aviation Authority of the Philippines said damage was reported at both locations. In the case of Tagbilaran, the second floor ceiling of the terminal collapsed but the debris was already cleared, he said.

Philippine Long Distance Telephone Co. and Globe Telecom said service in earthquake-hit areas continued but noted that operations were likely hindered by the lack of power and damage to their facilities. The companies said engineers are working to restore services.

Ports operations resumed at 1 p.m. after the Coast Guard Cebu Station commander, Weniel Azcuna, lifted a suspension order. He, however, urged passengers bound for Bohol to take the boat to the province’s Tubigon town because the passenger terminal in Tagbilaran was damaged.

Bohol Gov. Edgar Chatto said the Abatan Bridge that connected Maribojoc to Tagbilaran City had collapsed. But an alternative route in Antequerra town can be used.

The highway in Cortes particularly in Lilo-an was rendered impassable due to a landslide. A part of Cortes’ highway was also damaged.

Municipal halls in Sagbayan was destroyed while the municipal hall in Clarin was damaged.

In Cebu, nine persons were reported killed in the cities of Cebu, Talisay and Mandaue, and in the towns of Ronda and Pinamungahan.

Four people were killed when a portion of the ceiling of the Pasil Fish Market collapsed. Only three fatalities were identified—Leona Cabarrubias, Rondilino Bondoc and Condrado Perez.

Cabarrubias was identified by her son-in-law, Douglas Encabo, who went looking for her in the market which was cordoned by the police.

Encabo said his mother-in-law was selling fish in the market when the tragedy happened.

At least 250 patients of CCMC were evacuated after cracks were found in the hospital. Most of the patients were transferred to the nearby Pahina Central gym. Others stayed under the tents placed on the sidewalk near CCMC.

Eight patients with critical cases were taken to the other hospitals.

A fatality in Cebu City, Aurora Abellar Repe, 64, died after she was hit by a concrete wall in Barangay (village) Sawang Calero.

Four-year-old Shaisha Mia Patiluna was killed in a stampede on Tuesday morning when people panicked after they felt the earth shaking while they were lining up to receive cash assistance from the government’s Pantawid Pamilyang Pilipino Program (4Ps) in Pinamungahan town, Cebu.

A separate stampede also occurred in Toledo City where the Department of Social Welfare and Development personnel were distributing the cash doles when the earthquake hit. At least 20 people were hurt.

Ethel Natera, information officer of the provincial government, identified two of the fatalities as Mordencia Lumera, 80, of Ronda town and Leio Planos of Talisay.

She said Planos was killed while his two companions were wounded when their vehicle was hit by falling debris in Talisay.

A woman was also killed after she was hit by a glass decor at the fish section of the new public market in Barangay Centro, Mandaue City.

At least 3,000 people from Cebu City’s coastal barangays were evacuated to nearby gyms and church grounds. These were in Pasil, Sawang Calero, Duljo Fatima and San Nicolas.

Two towers of Iglesia ni Cristo (INC) on General Maxilum Avenue in Cebu City collapsed while cracks were found on the walls of Fort San Pedro, the Bureau of Customs building and approaches to the flyover in Barangay Mambaling.

In Iloilo, two persons were hurt.

One of them was a 50-year-old woman who fell from a scaffolding while overseeing repairs at her home in Barangay Tabuc Suba in Jaro District.