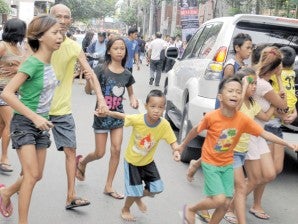 QUAKE PANIC Residents in Cebu City run scared as reports of a tsunami swept the city after a 6.9-magnitude earthquake shook the Central Visayas metropolis on Monday. The earthquake’s epicenter was placed near Tayasan town in Negros Oriental. The Philippines lies in the Pacific “Ring of Fire” and is prone to earthquakes and volcanic eruptions. AFP

A three-story building collapsed, while seven bridges were rendered impassable, they said.

In Guihulngan City, Negros Oriental, at least 29 people were feared dead following a landslide in Barangay (village) Planas, Mayor Ernesto Reyes said in a phone interview. He said there could be more fatalities in other barangays.

Rescuers dug with picks and shovels trying to reach dozens of people trapped under houses that collapsed, according to The Associated Press (AP).

Ten others died due to a landslide at the Guihulngan national road, Reyes said.

Twelve other fatalities were listed by the Provincial Disaster Risk Reduction and Management Council. Eight were from Guihulngan, one each from Jimalalud and Bindoy towns, and two from Tayasan.

The earthquake, which struck at 11:49 a.m., was located 5 kilometers northwest of Tayasan town in Negros Oriental, and was tectonic in origin. It had a depth of 10 km. The US Geological Survey placed the magnitude at 6.7.

In Manila, Malacañang urged the people affected by the earthquake to remain watchful and calm, and to cooperate with the authorities “while the threat of immediate dangers appears to have passed.”

President Benigno Aquino III ordered the National Disaster Risk Reduction and Management Council (NDRRMC) to assess and collate the extent of the damage and casualties, and to provide the necessary interventions, his spokesperson, Edwin Lacierda, said in a statement.

The temblor also prompted a tsunami warning from the Philippine Institute of Volcanology and Seismology (Phivolcs), alerting residents near the coastal areas of Negros and Cebu to watch for unusual waves but not requiring any evacuation.

The alert was canceled after no further reports of unusual sea level changes were received after the two-hour extended observation period.

But more aftershocks could be expected in the next few weeks in areas near the epicenter, according to Ishmael Narag, officer in charge of the Phivolcs’ seismology division. As of 1 p.m. Monday, Phivolcs had recorded 16 aftershocks.

The quake triggered another landslide in the mountain village of Solongon in La Libertad town, also in Negros Oriental. An unknown number of people were trapped, said Inspector Eric Arrol Besario, the town police chief.

“We’re now getting shovels and chainsaws to start a rescue because there were people trapped inside. Some of them were yelling for help earlier,” Besario told AP by phone. Three key bridges in the town cracked and were no longer passable, he said.

The earthquake sent shoppers scrambling under tables and workers and students rushing out of their buildings in cities of Negros and Cebu.

Classes in all public and private schools in Negros Oriental were suspended, while businesses in Dumaguete City were closed.

In Negros Occidental, the earthquake caused cracks in the city halls of Sagay and Cadiz, and the city hospital and gymnasium of Himamaylan.

Big waves damaged two houses and an ambulance fell on its side in Barangay Martilu, La Libertad, according to Mayor Lawrence Limkaichong. Two houses were also reported damaged in the town of Jimalalud, some 100 kilometers north of Dumaguete.

Huge waves washed out five bamboo and wooden cottages from a beach resort in La Libertad, but there were no reports of injuries, said Superintendent Ernesto Tagle. Elsewhere along the coast, people rushed out of schools, malls and offices.

Two people died in another town close to the epicenter, Tayasan, including a child when a concrete fence of a house collapsed, said Benito Ramos, head of the Office of Civil Defense.

Another child was killed in a church when a wall collapsed during a funeral in Negros Oriental’s Jimalalud town, Mayor Reynaldo Tuanda said.

Tayasan police officer Alfred Vicente Silvosa told AP by phone that aftershocks were preventing people from returning to their homes.

“We are outside, at the town plaza. We cannot inspect buildings yet because it’s dangerous,” Silvosa said. “I felt the building shaking, so I rushed out of the building. Our computers, shelves, plates, the cupboards, water dispenser all fell.”

The Negros Oriental police chief, Edward Carranza, said police rushed out of his building when the quake struck. “All my personnel ran out fearing our building would collapse,” he said.

“Now it’s shaking again,” he said as an aftershock hit. “My keychain is dancing.”

In Negros Occidental, Bacolod City Mayor Evelio Leonardia ordered the suspension of work and classes in all public and private offices and institutions. He, however, directed the city’s disaster team to be on alert and to inspect buildings for cracks.

In Iloilo City, employees and students rushed out of offices and classrooms as buildings swayed. Classes in the city and province were suspended in anticipation of aftershocks. Government employees were sent home in the afternoon.

A blackout occurred in the city, but power was normalized at 3:45 p.m.

The earthquake was slightly felt in Boracay Island and a few Mindanao and Luzon provinces.

Guihulngan Mayor Reyes said about 100 people were injured and brought for treatment to Guihulngan District Hospital and neighboring district hospitals.

Reyes said Guihulngan had about 100 patients who are in need of immediate medical attention. “We need to transport these patients to Bacolod, Cebu or Dumaguete but our roads and bridges are impassable,” he said.

Food and medicines were waiting in the provincial capital of Dumaguete, but the aid could not reach the villages in need because of damaged roads and bridges.

“There is a Canadian and an Indian doctor who are here for an earlier scheduled medical mission and it’s a good thing they are helping us,” Reyes said. “They have some medicines with them but that may not be enough.”

All bridges and roads leading to the north and south of the city were damaged, leaving it isolated, he said. These included the bridges of Martilo in La Libertad, Pangaluan in Jimalalud town, and Tinayonan in Guihulngan.

Many buildings were damaged, he said. “The Landbank building is leaning on one side while a portion of our public market collapsed.”

Cracks appeared along sections of the national highway and on public and private buildings, the Provincial Disaster Risk Reduction and Management Council said in a statement.

The first earthquake occurred at 11:49 a.m. with a magnitude of 6.8 and a depth of 20 km. The epicenter was located 72 km north of Dumaguete, 74 km west-northwest of Tagbilaran City and 80 km west-southwest of Cebu.

A second tremor hit various areas in the Visayas at 12:03 p.m. at a depth of 34.8 km. The epicenter was located 62 km north of Dumaguete, 69 km west-northwest of Tagbilaran and 84 km southwest of Cebu.

Bobby Cañete of the local Phivolcs station in Palo town in Leyte said that the series of earthquakes felt in the region was caused by the movement of the Philippine Sea Plate diving down under eastern Philippines along the Philippine Trench. With reports from Jhunnex Napallacan, Carla Gomez and Nestor Burgos Jr., Inquirer Visayas; Christine O. Avendaño and Leila B. Salaverria in Manila; and AP

LGUs should be consulted on easing health protocols — Robredo