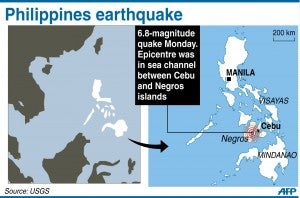 MAP of the Philippines locating the epicenter of a 6.8-magnitude quake Monday, Feb. 6, 2012.

DUMAGUETE CITY, Philippines – At least 40 persons, including a nine-year-old girl, died in Negros Oriental during the 6.9-magnitude earthquake that hit the province and other areas shortly before noon Monday, local authorities here said.

The Philippine Institute for Volcanology and Seismology (Phivolcs) measured it as 6.9 at a relatively shallow depth of 10 kilometers, centered off the heavily populated central island province of Negros and Cebu.

Meanwhile, the US Geological Survey website placed the epicenter of the earthquake at 46.6 kilometers deep, some 72 kilometers north of Dumaguete City, 74 km west, northwest of Tagbilaran, Bohol and 80 km west, southwest of Cebu City.

The earthquake was the strongest to be ever felt in Negros Oriental, according to several residents here.

Of the latest death count, 29 died in the mountain barangay (village) of Planas during a landslide triggered by the earthquake, Mayor Ernesto Reyes of Guihulngan City said in a phone interview.

Reyes said 10 other persons were also reported to have died due to a landslide at the Guihulngan national road. Earlier, Reyes said that as many as 30 houses were also buried in the landslide.

According to the mayor, about 100 persons were injured and brought for treatment to the Guihulngan District Hospital and neighboring district hospitals.

He expressed fear that there might be more fatalities and injured in other villages. Reyes said their communication with the villages has been cut off.

Negros Oriental Governor Roel Degamo earlier said 9-year-old girl identified as Bernadette Raidan died when a wall collapsed in Tayasan town, Negros Oriental. The Office of Civil Defense administrator Benito Ramos earlier said that Raidan was the first confirmed casualty due to the quake. He added that classes in the girl’s school were reportedly suspended due to aftershocks.

Meanwhile, aside from Raidan, the National Disaster Risk Reduction and Management Council (NDRRMC), in its 5 pm situation report, have confirmed the death toll to still be at seven, including Raidan. The NDRRMC identified other casualties as Anafe Estrabella, a Grade 6 pupil, of Barangay Mompong in Jimalalud, Negros Oriental, who was pinned to death by a collapsed wall of a chapel and Betty Yap Manzano, 62, of Guihulngan, Negros Oriental. Meanwhile, four other casualties remain unidentified, the NDRRMC said

“We’re now getting shovels and chain saws to start a rescue because there were people trapped inside. Some of them were yelling for help earlier,” Besario told The Associated Press by phone. Three key bridges in the town suffered cracks and were no longer passable, he said.

A three-story office building also collapsed in La Libertad, but occupants managed to run out.

Ramos said the violent shaking of buildings in the cities of Cebu and San Carlos led to broken windows and cracks on the walls, but no high rises were believed to have sustained major damage.

Ramos said earlier they were still getting damage reports from other affected areas.

While no immediate damage was reported, Silliman University announced the suspension of all classes and offices for Monday afternoon.

Mark Raygan Garcia, director of the Office of Information and Publication, said class suspensions were a precautionary measure that would give university personnel time to inspect all buildings and facilities.

“This puts premium on the safety and welfare of our students and personnel,” Garcia said.

In Cebu, people and students left the buildings, shopping malls and schools. Classes were suspended in some schools in Cebu City.

Officials in some areas suspended work and canceled classes. Power and telecommunications were knocked out in several places.

Carranza said police rushed out of his building when the quake struck. “All my personnel ran out fearing our building would collapse,” he said.

“Now it’s shaking again,” he said as an aftershock hit. “My keychain is dancing.”

Philippine seismologists and local residents said there was panic but no immediate reports of casualties or major damage.

Philippine seismologists briefly issued a tsunami alert for the central islands. Five bamboo and wooden cottages were washed out from a beach resort in La Libertad by huge waves, but there were no reports of injuries, said police Superintendent Ernesto Tagle. Elsewhere along the coast, people rushed out of schools, malls and offices.

The Hawaii-based Pacific Tsunami Warning Center said there was no danger of a widespread destructive tsunami.

But Phivolcs raised its tsunami warning to the second of a three-stop alert level for coastal areas in Negros, meaning the public is asked to stay away from beaches and “be watchful” for any signs of rising tides.

However, level two does not warrant any evacuation.

Ramos said the chances of a tsunami or a tidal wave were very slim because the quake’s epicenter was located on a narrow strait between two islands.