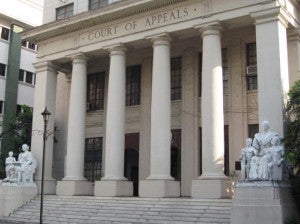 MANILA, Philippines—The Court of Appeals has absolved another accused in the P6.65 billion syndicated estafa case against the officials of Globe Asiatique led by fugitive Delfin Lee.

The appeals court also ordered the lifting of the warrant of arrest against Alvarez.

Alvarez is the second accused in the syndicated estafa case to be ordered dropped from the charge sheet by the Court of Appeals.

Early this year, the appeals court’s special 10th division ordered the dismissal of the case against GA documentation head Christina Sagun saying that her duty was ministerial and she was never privy to the use of ghost borrowers and fake documents to obtain the more than P6 billion loan in 2009.

In the case of Alvarez, the appeals court said initially, he was not among those first charged in the scam and was only included in the case upon the recommendation of Senior Deputy Prosecutor Theodore Villanueva.

Court records showed that he was only included in the case because he only notarized the documents alleged to have been executed by the fake buyers.

The appeals court said a notary public does not automatically become a co-conspirator to a crime.

“Absent clear indications or links that a notary public has knowledge of the alleged crime and willingly and wilfully participates in the commission of that crime, his mere act of notarizing is not enough basis to allow the hammer to fall upon him,” the appeals court said.

In fact, the appeals court noted that HDMF Officer-in-Charge Emma Linda Faria has no intention of including Alvarez as co-accused in the case but only a witness.

The appeals court also expressed doubts if the Pampanga court examined the evidence presented to it. It pointed that the Department of Justice’s resolution failed to mention Alvarez’ link to the conspiracy.

“In sum, the totality of evidence so far presented indicates that there is not enough basis to implicate petitioner at this time for the alleged crime,” the appeals court said.

Concurring in the decision were Associate Justices Hakim Abdulwahid and Marlene Gonzales-Sison.

With the dismissal of the case against the two, only Delfin Lee, Globe Asiatique owner, his son Dexter Lee, Cristina Salagan remains as accused in the case.

Bishop to Aquino: Get Delfin Lee, too

Globe Asiatique president Lee wins a round in court