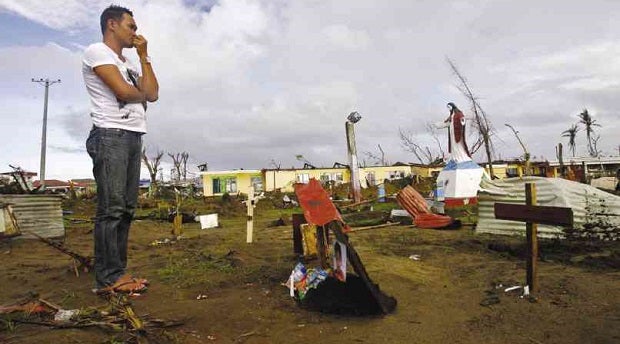 A MAN who survived Supertyphoon “Yolanda” visits the grave of a relative who died at the height of the storm in Palo, Leyte province, as storm survivors continue to struggle for their daily survival amid the toughest of conditions and threats to the flow of relief. RAFFY LERMA

TACLOBAN CITY, Philippines — Survivors of Supertyphoon “Yolanda” (Haiyan) gathered to pray while a priest sprinkled holy water on their ruined homes Tuesday in a ceremony marking the end of a 40-day mourning period for the thousands killed.

The memorial took place in Tacloban on the island of Leyte, which bore the brunt of the Philippines’ deadliest typhoon, accounting for more than 5,000 of the 6,069 confirmed deaths.

“The people here have accepted that their loved ones will not be coming back,” Father Amadeo Alvero, of the Santo Niño parish in Tacloban, told AFP after celebrating an open-air mass attended by about 100 survivors.

“However, they are having difficulty getting back on their feet because they still do not have proper homes, electricity is still down, and many have also lost their jobs. City officials have yet to find a relocation place for them.”

The Philippines is a predominantly Catholic country where it is traditional to mourn the dead for 40 days.

Residents of the parish are families of fishermen, fish vendors, and informal settlers.

They have all been told by the city government that they will not be allowed to rebuild because their old homes were too close to the shore and dangerous, the priest added.

Yolanda slashed across the central Philippines on November 8, unleashing ferocious winds of up to 315 kilometers (195 miles) an hour on an area the size of Portugal, destroying more than a million homes and leaving four million people homeless.

The authorities said most of the deaths were caused by tsunami-like giant storm surges that swept through Tacloban and other cities and towns of Leyte and Samar islands.

Apart from the dead, 1,779 people remain missing, according to the latest government tally.

The priest walked through the debris-filled ruins of homes in the coastal neighborhood sprinkling holy water on places where bodies of at least 30 of the victims had earlier been recovered.

“In my homily, I told them that death did not end their relationship with their relatives. I said we need to continue to pray to God to intercede for us,” Alvero added.

Elsewhere in the city, relatives have organized a mass candle-lighting ceremony to mark the end of the mourning period for their dead, the priest added.

President Benigno Aquino has said the government will need nearly $3 billion to rebuild these areas, while the United Nations on Monday launched a $791 million international aid appeal to finance the survivors’ needs over the next 12 months.

“The humanitarian community’s response plan sets out priority activities to ensure that vulnerable families have access to critical food assistance, clean water and sustainable and dignified shelter,” said the UN resident and humanitarian coordinator for the Philippines Luiza Carvalho.

It also seeks to help the survivors restore lost livelihoods, she said in a statement.

Tacloban buries some dead as ‘Yolanda’ survivors beg for help