Tacloban buries some dead as ‘Yolanda’ survivors beg for help

TACLOBAN CITY, Philippines—Scores of decaying bodies were being taken to mass graves Thursday as overwhelmed Philippines authorities grappled with disposal of the dead and the living begged for help after the typhoon disaster.

The expected arrival later in the day of the USS George Washington, a huge aircraft carrier with 5,000 sailors aboard, offered some hope for the hungry and thirsty left to roam the ruined city of Tacloban.

But almost a week after Typhoon “Yolanda” (Haiyan) swept through the country’s central islands, crushing settlements and laying waste to an already poor area, the stench of putrefying flesh hung heavy in the air.

“I do feel that we have let people down,” conceded United Nations humanitarian aid chief Valerie Amos, who visited Tacloban on Wednesday.

“Those who have been able to leave have done so. Many more are trying. People are extremely desperate for help,” she told reporters in Manila.

“We need to get assistance to them now. They are already saying it has taken too long to arrive. Ensuring a faster delivery is our… immediate priority.”

By mid-morning in Tacloban on Leyte island, some of the 200 corpses that had been lined up side-by-side at a local government building had been placed at the bottom of a huge pit expected to be several layers deep by the time it is covered over with earth.

“There are still so many cadavers in so many areas. It’s scary,” said Tacloban mayor Alfred Romualdez, adding that retrieval teams were struggling to cope.

“There would be a request from one community to collect five or 10 bodies and when we get there, there are 40,” Romualdez told Agence France-Presse, saying that aid agencies’ response to the increasingly desperate crisis had been too slow. 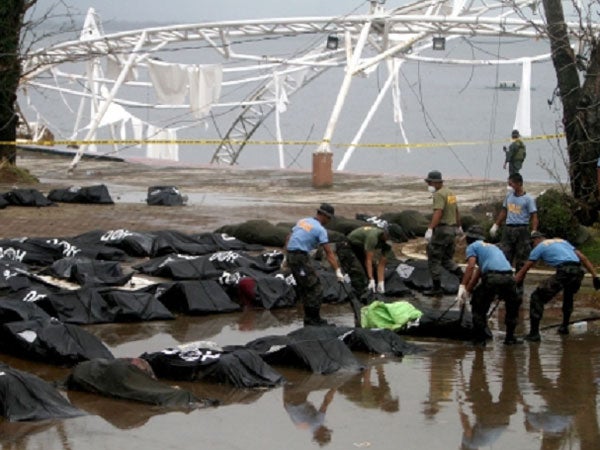 Around 100 bodies lie on the ground of the Tacloban city hall, for identification while being readied for mass burial. RICHARD A. REYES

Six days after Supertyphoon “Yolanda” unleashed its fury, President Barack Obama urged Americans to dig deep for donations to their former Asian colony. US officials said relief channels were slowly opening up as the aircraft carrier leads a small armada of warships steaming towards the Philippines.

But on the ground, aid is still not getting through to the hungry and thirsty battling to survive the aftermath.

Sick or injured people lie helplessly among the ruins of buildings, while those with the energy try to leave a place that resembles hell.

‘Atmosphere of fear and depression’

Efren Nagrama, area manager at the civil aviation authority, said conditions were “very dire now” as he surveyed the filthy stream of humanity at Tacloban’s battered airport clamoring to get a flight out.

“You see hundreds coming to the compound every day. People who have walked for days without eating, only to arrive here and be made to wait for hours or days under the elements,” he said.

“People are pushed to the tipping point — they see relief planes but cannot get to the food nor get a ride out. There is chaos.”

Mayor Romualdez said the people of Tacloban needed an “overwhelming response” from aid organizations and the government.

“I cannot use a truck to collect cadavers in the morning and then use it to distribute relief goods in the afternoon,” he added.

“Let’s get the bodies out of the streets. They are creating an atmosphere of fear and depression.”

City officials estimate that they have collected 2,000 bodies but insist many more need to be retrieved. The UN fears that 10,000 people may have died in Tacloban city alone, but President Benigno Aquino has described that figure as “too much”.

While the retrieval operation gets going, there are growing fears for the health of those who survived.

The World Health Organization has said there were significant injuries that need to be dealt with — open wounds that can easily become infected in the sweltering tropical heat.

Experts warn that a reliable supply of clean drinking water is vital if survivors are not to fall victim to diarrhoea, which can lead to dehydration and death, especially in small children.

Steaming to the rescue

Pledges of help continued to come in from abroad, with Obama on Wednesday urging Americans that “even small contributions can make a big difference and help save lives”.

Along with ships and planes sent by an array of countries including Australia, Britain and Japan, the United States has dispatched an advance force of Marines equipped with cargo planes and versatile Osprey aircraft.

The USS George Washington and other Navy ships are expected off the Philippines Thursday night and Washington has committed $20 million, roughly half for food and the rest to prevent disease outbreaks.

One US official said relief workers were now able to get more aid out of Tacloban airport, and that the opening of a land route had given a significant boost by connecting to a sea port.

The initial effort was “a lot like trying to squeeze an orange through a straw”, the official told reporters on a conference call. “We are now getting more straws, if you will, and bigger straws.”

However, hundreds of Philippine soldiers and police continue to patrol Tacloban’s streets and man checkpoints to try to prevent pillaging after outbreaks of lawlessness.