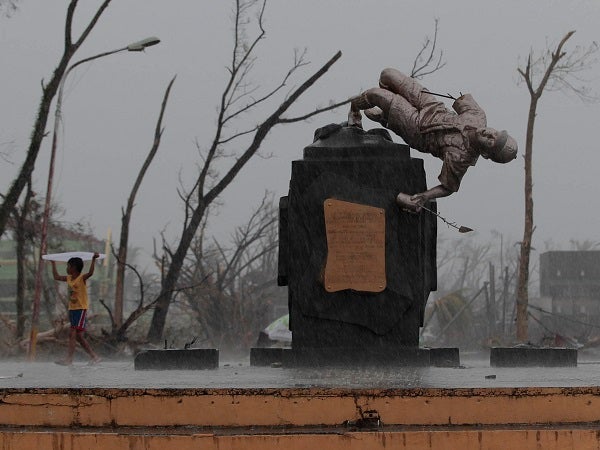 A young survivor uses a plastic cover to protect him from rain as he passes by a damaged Boy Scout statue at typhoon ravaged Tacloban city, Leyte province, central Philippines on Tuesday, Nov. 12, 2013. AP FILE PHOTO

CNN journalists Anderson Cooper in his report said what is happening in Tacloban is a “demolition, not a construction job.”

“There is no real evidence of organized recovery or relief,” he said.

Cooper is among the top international journalists who are in the Visayas region covering the massive destruction inflicted by “Yolanda.”

He said it has been five days since the storm but it is still not clear who is in charge in providing assistance in the area. Fellow CNN journalist Paula Hancocks said the search and rescue never materialized.

“It is a very desperate situation, among the most desperate I’ve seen in covering disasters…You would expect perhaps to see a feeding center that had been set up for 5 days after the storm. We haven’t seen that, not in this area,” Cooper reported.

He compared the Philippine government’s response to that of the Japanese government during the earthquake in 2011 where after two days, they have barely seen bodies scattered around the devastated areas.

Cooper said even without equipment, the Japanese soldiers used sticks in search for bodies and survivors.

BBC’s Jon Donnison also reported that “there does not seem to be an effective operation to get help to those in need.”

Malacañang, through Presidential Spokesperson Edwin Lacierda, said relief goods were getting into the city.

But a reporter from the Associated Press who drove around Tacloban for around 4 miles Wednesday reported that “no evidence of any organized delivery of food, water or medical supplies, though piles of aid have begun to arrive at the airport.”

A report from the New York Times said a team from Médecins Sans Frontières, complete with medical supplies who arrived in Cebu island last Saturday have been looking for a flight to Tacloban up to Tuesday but was informed that Tacloban airport is only for the Philippines military use.

The administration, overwhelmed by the trail of destruction left by  “Yolanda,” has vowed to accelerate relief and disaster efforts as major roads have been reopened and international aid began pouring into the country.

“It’s a logistics nightmare … that’s going to be addressed,” said Cabinet Secretary Rene Almendras, admitting at a briefing in Malacañang that the Aquino administration was not fully prepared to deal with a humanitarian catastrophe of this magnitude.

President Aquino himself met with key officials Tuesday night to revise the masterplan for disaster response amid criticisms by local and international media networks of the slowness—if not inadequacy—of government’s aid to the victims.

“We have to adjust; we have to expand (the masterplan). We have not seen anything at the magnitude we’re seeing now. Hundreds of thousands (are affected) now. The magnitude is big,” said Almendras.

The President said in an interview with CNN that “the sheer number of people that were affected in these three provinces is quite daunting.”

Five days after Yolanda struck, the national government has yet to reach all areas affected by the typhoon.

“Now, we will (not) deny the fact and we will not insist that all have received (aid) because there are those who have not received any. What we are saying is we need help in reaching all these (people) who have yet to receive (aid),” he said.

But Almendras said disaster response would be intensified with new directives from Aquino following the meeting.

“Well, this is the first time we are going to try it at this magnitude. So far, things are moving. So far, goods are moving. So far, the numbers are beginning to accelerate, we are stepping up. So it’s really the resources. You cannot imagine the degree of—you cannot imagine the magnitude of resources that need to be made available to do this,” said Almendras.

Almendras cited limited transport capabilities of the government and other logistical problems for the failure to get food packs, medicines and other relief goods to the people in the Visayas soon after Yolanda left the country over the weekend.

“How we wish … (but) we cant’ fly,” he said of only two of three C-130 transports planes currently working, and the safety issues in Tacloban City airport, which has no night-flying/landing capability.

“It’s not within the national government control how effectively we can hit the ground. There are places (that are) very remote. (Government officials) need to know (the victims’ needs) so that we can reach them,” said Almendras.

He said the difficulty of getting aid to the victims was due to the breakdown of disaster response mechanism on the ground, where local executives from barangay to the municipal and provincial levels—who should have been the first responders—were themselves victims of the typhoon.

He said the government was facing “not a small amount of work to be done.” “Admittedly, (in terms of aid distribution) we are at a small level today. We have a dream” to reach all the victims as ordered by the President on Saturday, he said.

Almendras said the government would fulfill the “challenging task assigned to us” in the coming days.

Asked if the quality and speed with which the Aquino administration was responding to the humanitarian emergency would define the presidency, Almendras said:

“I don’t think it is an acid test of this administration. This is an acid test of Filipino people. How well we handle this crisis will matter a lot. Yes, there will be challenges but we will move on.” With a report from Michael Ubac, Philippine Daily Inquirer