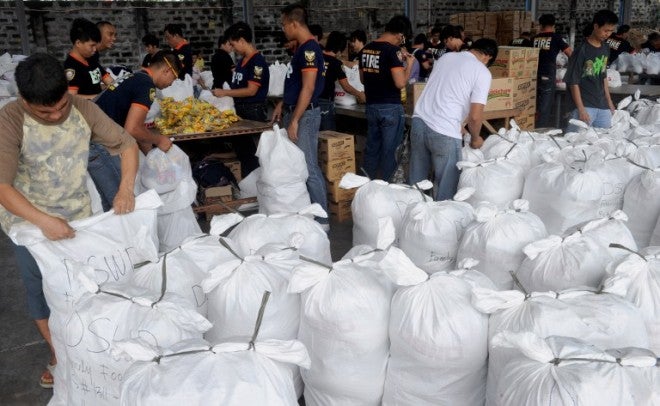 Volunteers repack relief goods at the Department of Social Welfare and Development (DSWD) in Manila for victims of the Super Typhoon Haiyan (Philippine name: Yolanda) that smashed into coastal communities on the central Philippines. AFP FILE PHOTO

MANILA, Philippines – On Day 6 (Thursday) of relief operations, food and other provisions will finally reach all of Leyte’s 40 municipalities, said Secretary Herminio Coloma of the Presidential Communications Operations Office, in a televised press conference.

The Aquino administration made the assurance following scathing criticism from international media about the government’s sluggish pace in aiding victims of monster typhoon “Yolanda” nearly a week after the epic tragedy.

“We’re now at Day 6. According to reports from Secretary [Corazon] ‘Dinky’ Soliman, we are able to ensure [relief] distribution to reach all Leyte municipalities,” Coloma said in Filipino, as he presented to media what the government has done for typhoon-ravaged areas in the country.

Coloma said almost all of the 40 towns were coastal municipalities.

But on the ground, aid is still not getting through to the hungry and thirsty battling to survive the aftermath, a report from Agence France Presse said Thursday.

Sick or injured people lie helplessly among the ruins of buildings, while those with the energy try to leave a place that resembles hell, the report added.

Interior Secretary Manuel “Mar” Roxas II, in an interview with CNN on Thursday, said they have yet to reach and communicate with half of the Leyte municipalities.

Asked about the expected death toll, he said, “I think there are still many towns that have not sent in complete reports. And out of the 40 towns of Leyte, only 20 have been contacted.”

Roxas told Radyo Inquirer 990AM that they will start the “Bigas Brigade (Rice Brigade)” today (Thursday) “where all the 40 towns of Leyte will be reached by truck or helicopter.”

“Whatever will fit in the army trucks will be divided (and sent) to those municipalities. There are 8 trucks dedicated today and tomorrow (the number) will double,” he said.

Leyte is among the hardest-hit provinces by what is now considered the world’s strongest typhoon of the year. 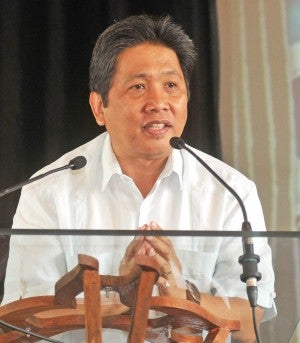 Roxas said Leyte has a population of around one and a half million. However, the latest report by the NDRRMC said 1.79 million people were affected by the typhoon in Leyte, most of them from the cities.

Almost 50,000 people from the province are reported staying in the 46 evacuation centers.

Scores of decaying bodies were being taken to mass graves Thursday as overwhelmed authorities grappled with disposal of the dead and the living begged for help after the typhoon disaster.

The expected arrival later in the day of the USS George Washington, a huge aircraft carrier with 5,000 sailors aboard, offered some hope for the hungry and thirsty left to roam the ruined city of Tacloban.

But almost a week after Yolanda swept through the Visayas, crushing settlements and laying waste to an already poor area, the stench of putrefying flesh hung heavy in the air.

“I do feel that we have let people down,” conceded United Nations humanitarian aid chief Valerie Amos, who visited Tacloban on Wednesday.

“Those who have been able to leave have done so. Many more are trying. People are extremely desperate for help,” she told reporters in Manila.

“We need to get assistance to them now. They are already saying it has taken too long to arrive. Ensuring a faster delivery is our… immediate priority.”

By mid-morning in Tacloban on Leyte island, some of the 200 corpses that had been lined up side-by-side at a local government building had been placed at the bottom of a huge pit expected to be several layers deep by the time it is covered over with earth.

“There are still so many cadavers in so many areas. It’s scary,” said Tacloban mayor Alfred Romualdez, adding that retrieval teams were struggling to cope.

“There would be a request from one community to collect five or 10 bodies and when we get there, there are 40,” Romualdez told Agence France Presse, saying that aid agencies’ response to the increasingly desperate crisis had been too slow.

Six days after Yolanda unleashed its fury, US President Barack Obama urged Americans to dig deep for donations to their former Asian colony. US officials said relief channels were slowly opening up as the aircraft carrier leads a small armada of warships steaming towards the Philippines. With a report from Agence France Presse