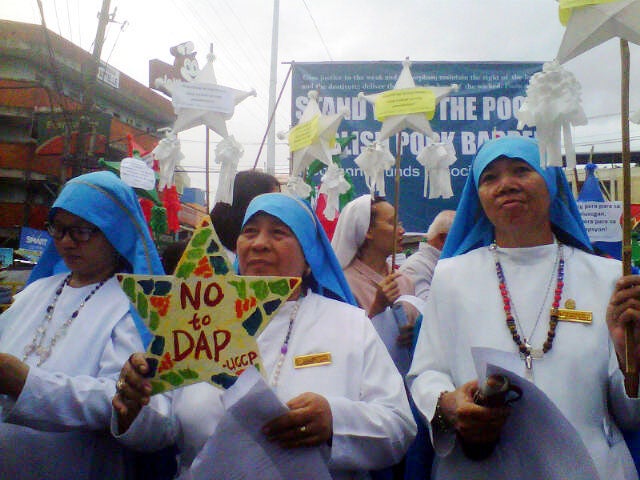 MANILA, Philippines- A coalition of Catholic clergy, religious and laity on Monday staged a protest calling for the total abolition of the Priority Development Assistance Fund (PDAF) or pork barrel.

The Church of People’s Alliance held a Lantern Nativity Walk from Bustillos Church to Mendiola in Manila with the message to Malacañang: abolish the pork barrel system in the government.

“We remain committed to abolish all forms of pork barrel from all agencies of the government. We want Congress to pass a law that will totally scrap PDAF and even the Disbursement Acceleration Program (DAP),” said Fr. Ben Alforque of Church People’s Alliance.

Alforque said looting public resources for which the people have diligently labored is immoral.

“We fear that the Supreme Court will render a decision declaring the (DAP) constitutional because the chief justice was appointed by the President,” he said.

The group sang Christmas carols with their lanterns sending their message of dismay to Malacañang for its inaction on pork barrel.

“This walk of commitment heralds the Christmas message of truth, justice, and accountability,” Alforque said.

“Let us not tolerate the silence of Malacañang over this issue,” she said.

The group aired their sympathy for the victims of Supertyphoon Yolanda in the Visayas and slammed the government’s neglect and slow response to disaster zones.

The group peacefully ended their protest with an appeal to the public to be vigilant until the entire pork barrel system is abolished.