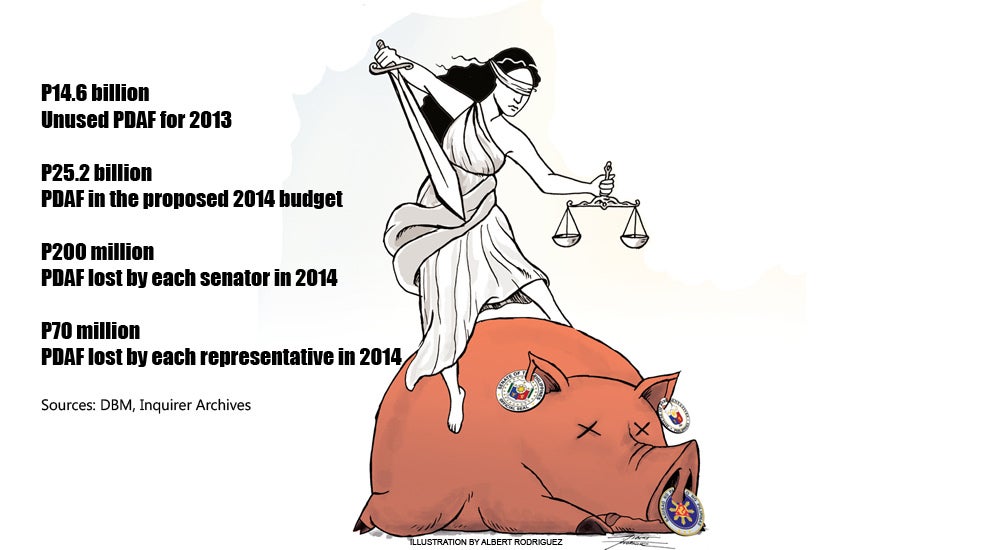 In a landmark decision that could spell the end of political patronage, the Supreme Court on Tuesday declared unconstitutional past and present congressional pork barrel laws as it ordered the criminal prosecution of individuals who had benefited from the schemes over the past two decades.

In declaring unconstitutional the provisions on the Priority Development Assistance Fund (PDAF) in the 2013 General Appropriations Act (GAA) and its earlier incarnation, the 1990 Countrywide Development Fund (CDF), the high tribunal held that these arrangements violated the principle of separation of powers.

Reversing itself after thrice upholding the legality of the lawmakers’ pork barrel, the court said that this time it simply “allowed legislators to wield, in varying gradations, nonoversight, postenactment authority in vital areas of budget execution” and denied the President the power to veto items in the GAA.

The ruling was issued four months after the Inquirer broke the story that P10 billion in allocations from the PDAF and the Malampaya Fund meant to ease rural poverty and the plight of storm victims over the past 10 years had gone to ghost projects and massive kickbacks.

“This will surely hurt the presidency,” said Ramon Casiple, executive director of the Institute for Political and Electoral Reforms. “It means it will be very difficult for the executive and legislative branches to create discretionary funds.”

Western Samar Rep. Mel Senen Sarmiento said political patronage would have little influence now during elections. “Little by little, I hope we come to a time where people will vote based on performance.”

In its three-page ruling, the Supreme Court declared unconstitutional  the following laws and practices:

— “All legal provisions of past and present congressional pork barrel laws … which authorized legislators—whether individually or collectively organized into committees—to intervene, assume or participate in any of the various postenactment identification, modification and revision of project identification, fund release and/or fund realignment, unrelated to the power of congressional oversight.

— “All legal provisions of past and present congressional pork barrel laws, such as the previous PDAF and CDF articles and the various congressional insertions, which conferred personal, lump-sum allocations to legislators from which they are able to fund specific projects which they themselves determine.

— “All informal practices of similar import and effect, which the court similarly deems to be acts of grave abuse of discretion amounting to lack or excess of discretion.

— “The phrases (1) ‘and for such other purposes as may be hereafter directed by the President’ under Section 8 of Presidential Decree No. 910” on the use of the Malampaya Fund other than for energy development and (2) “to finance the priority infrastructure development projects” under Section 12 of PD 1869, as amended by PD 1993, for both failing the sufficient standard test in violation of the principle of nondelegability of legislative power.”

The two presidential decrees refer to a portion of revenues from Pagcor to fund projects ranging from flood control to beautification and healthcare in Metropolitan Manila authorized by the President.

The court said a temporary restraining order issued on Sept. 10 covering the remaining PDAF allocations for the rest of the year—roughly P12 billion—and those from previous years had become permanent. It said these funds, along with the Pagcor resources, should be returned to the Treasury.

A Pagcor statement said that for the first nine months of this year, it remitted to Malacañang P2 billion of its earnings. According to the Department of Energy, the Malampaya Fund amounted to P132 billion as of June 30. It was P70 billion when President Aquino assumed office.

The Supreme Court likewise directed the government to investigate and prosecute all government officials and private individuals who have irregularly, improperly or unlawfully disbursed funds under the pork barrel system.

The National Bureau of Investigation has filed a complaint for plunder in the Office of the Ombudsman against businesswoman Janet Lim-Napoles and Senators Juan Ponce Enrile, Jinggoy Estrada and Ramon Revilla Jr. in connection with the P10-billion pork barrel scam. They all have denied any wrongdoing.

Former President and now Pampanga Rep. Gloria Macapagal-Arroyo and three of her Cabinet secretaries were also named recently in another plunder complaint in connection with the alleged wholesale theft of P900 million from the Malampaya Fund meant for victims of Tropical Storms “Ondoy” and “Pepeng” in 2009.

“We thought we won,” said Solicitor General Francis Jardeleza. The government respects the court ruling, he told reporters before attending oral arguments on petitions questioning in the Supreme Court the constitutionality of the Disbursement Acceleration Program—an impounding mechanism for government savings.

Jardeleza had pleaded for the retention of the congressional pork, saying that half a million students and a similar number of indigent patients were depending on the lawmakers for their continued enrollment and healthcare.

Budget Secretary Florencio Abad said he wanted to see the full decision to determine if there was still a way to make use of the pork barrel funds.—With a report from Leila B. Salaverria and AFP

Read Next
Justice looks for evidence that Aquino OKd DAP
EDITORS' PICK
Speed up your game with the new vivo Y20s [G]
6 p.m. to 5 a.m curfew stays as ‘NCR Plus’ bubble shifts to MECQ
Pre-order the new vivo Y20s [G] to get a free TWS earphone
Pru Life UK receives four golden arrows for solid corporate governance
Philippines, US to begin 2-week joint ‘Balikatan’ exercises on Monday
‘NCR Plus’ to be under MECQ starting April 12 until April 30 — Palace
MOST READ
Stop ‘creeping occupation’ of ‘militia’ boats in WPS, Pacquiao asks China
Bea Alonzo clarifies status of her relationship with Dominic Roque
Convicted former aide of Sen. Bong Revilla dies — BuCor
Locsin to China: ‘Then move out’
Don't miss out on the latest news and information.