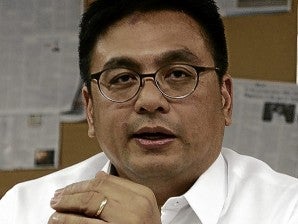 MANILA, Philippines—Answering allegations that he had misused his Priority Development Assistance Fund (PDAF) back when he was a congressman, Customs Commissioner Ruffy Biazon on Friday said he had pursued projects and programs that benefited his constituents but acknowledged that the system or process may have been weak and easily abused.

“I always exercised prudence and fidelity in the performance of my duty as the representative of Muntinlupa as well as in other responsibilities to the public, and pursued projects and programs that benefited my constituents,” he said in a statement.

“But as we have seen in some instances, the processes involved have been vulnerable to abuse by certain parties,” he said.

Biazon, the first close ally of President Aquino to be dragged into the pork barrel controversy, was one of 34 personalities, including some other former lawmakers, who were recommended for prosecution by the National Bureau of Investigation for the alleged misuse of the PDAF.

He said he recognized that “accounting for public funds comes with the territory of serving in the government, whether it be at the lowest levels of local government or at the highest levels of national office.”

Biazon also became a magnet of controversy last July when the President, in his State of the Nation Address (Sona), castigated the bureau he heads for corruption and incompetence.

Aquino singled out personnel of the Bureau of Customs, the Bureau of Immigration and the National Irrigation Administration for censure, saying they had no place in the government.

Biazon immediately offered his resignation after the Sona but he said he was assured by Aquino of his continued confidence in him.

The corruption-tainted customs bureau has since undergone a drastic revamp, which generated more controversy, as some of the influential customs collectors balked at being moved and sued the bureau. Eventually all the collectors vacated their posts, with some of them opting for early retirement.

Malacañang on Friday said the inclusion of Biazon in the second batch of respondents in the P10-billion pork barrel scam disproved the charge that the Aquino administration was engaging in the “selective prosecution” of its critics.

“The President has always said that you go where the evidence takes you. We have always said that there is no partiality. I think that has been repeated, not just by the President but by the investigators themselves, by the secretary of justice,” said deputy presidential spokesperson Abigail Valte.

There is no word yet from Aquino if Biazon’s legal woes could trigger yet another revamp in the customs bureau.

Communications Secretary Herminio Coloma said he needed to verify whether the Palace would ask Biazon to take a leave of absence.

“People will interpret things according to how they see it but these are the facts,” Valte said, stressing that the Department of Justice (DOJ) and its investigation arm, the NBI, would stick to the President’s goal of exacting accountability from officials who misused their pork barrel, regardless of their political affiliation.

Asked if the President would again come to the aid of Biazon, Valte said, “I would have to defer comment until such time that I have been able to speak with the President.”

“When the news broke out, I did already ask for guidance from the President. However, I was informed that he is currently in a meeting,” she said.

Asked why no senators were in the second batch of respondents, Valte said: “(Justice) Secretary Leila de Lima explained during the briefing that there may have been some names that have not been included, primarily because they are making sure that all pieces of documentary evidence are in. They also did mention that there would be others, so perhaps let’s just wait for that.”

She said the public should be patient with the legal process initiated by the DOJ, which had yet to get past the preliminary investigation stage in the Office of the Ombudsman.

“There is a process that we have to follow. And while we in the executive understand the import of these cases, I would assume that the Ombudsman also would not want to be peppered with allegations of [cases] being railroaded. There is a process that has to be followed and, of course, we should allow time for that,” said Valte.