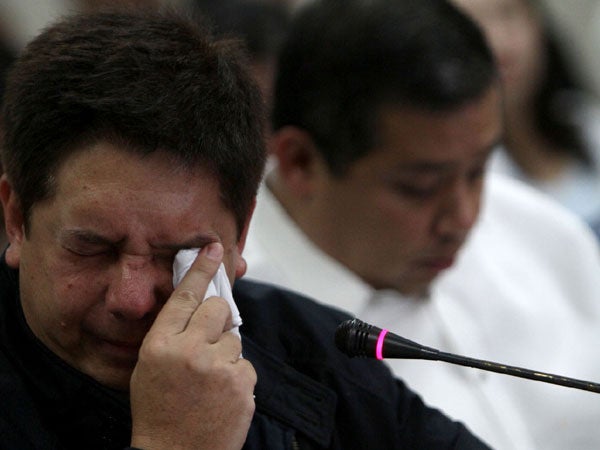 Tacloban City Mayor Alfred Romualdez wipes tears during the Congressional Oversight Committee on the Philippine Disaster Risk Reduction and Management hearing at the Senate in Pasay City on Monday. Also in the photo is Leyte 1st District Rep. Ferdinand Martin Romualdez. PHOTO BY RICHARD A. REYES

The mayor of Tacloban City on Monday unburdened himself before lawmakers over the alleged refusal of national officials to rescue thousands of his people in the immediate aftermath of Supertyphoon “Yolanda.”

Appearing before a congressional committee in the Senate, Mayor Alfred Romualdez tearfully recounted his gripping experience of the onslaught of Yolanda and its tragic aftermath.

Breaking down before senators, representatives and officials, Romualdez vented his frustration on government officials, including President Aquino, for what he said was their failure to send police and military reinforcement “until today.”

Since the city police force lineup had been depleted, local officials need the reinforcements to rescue survivors in the city of 250,000 leveled by the powerful storm, he said.

After the hearing, Romualdez told reporters that the city government had not received a “single cent” in foreign aid.

In an interview last night, Romualdez said Defense Secretary Voltaire Gazmin and Interior Secretary Mar Roxas were in Tacloban before, during and after the typhoon struck, and having direct supervision over the military and police, could have easily mobilized soldiers and policemen to the calamity-stricken city.

Their capability to do that became even more pronounced when President Aquino arrived there two days after the storm, he said.

“Were they there to support the local government, or to be mere observers?” he said, referring to Gazmin and Roxas.

Romualdez clarified that he wasn’t accusing the national government of failing to extend any help. He said he was merely pointing to the government’s lack of “massive effort” to rescue survivors, and its focus on relief efforts.

Sought for comment, Roxas, who skipped the hearing by the congressional oversight committee on the law that created the National Disaster Risk Reduction and Management Council (NDRRMC) in 2010, said Romualdez’s narration of what transpired during their meeting was “kalokohan at kasinungalingan (absurd and full of lies).”

He also dismissed the Tacloban mayor’s claim that the police and the military had failed to send augmentation forces to the city.

Roxas said the Armed Forces of the Philippines deployed some 3,100 soldiers while the Philippine National Police flew in close to 2,000 personnel to restore law and order in typhoon-wrecked areas and to help in the distribution of relief assistance.

While winding up the three-hour-long hearing, Sen. Antonio Trillanes IV, chair of the oversight committee, said “recalling what Mayor Romualdez mentioned, if politics got in the way of disaster response, is the worst thing we could ever do.”

Muntinlupa Rep. Rodolfo Biazon, cochair of the committee, suggested that charges of shortcomings on the part of officials be tackled in another hearing.

Contrary to perception, NDRRMC officials said there were reinforcements from the police and the military days after the storm tore through the Visayas on Nov. 8.

The Senate and the House of Representatives convened the oversight committee to review the NDRRMC law and draw up measures to further improve government response to future calamities of Yolanda’s magnitude.

The Aquino administration, facing its worst disaster in three years, is assembling a massive post-Yolanda relief, rehabilitation and reconstruction plan that could cost up to P130 billion.

“Hopefully, there will be no politics there,” Trillanes said, suggesting that officials from all parties should be part of the rehabilitation plan.

Romualdez said Roxas had repeatedly harped on the need to assess the damage in all their daily briefings in the aftermath of the storm.

The problem was the 293-strong city police had been whittled down to 25 because many were stranded in their villages when the typhoon battered the city. And soldiers wouldn’t go around without any policeman with them.

So, when he met Cabinet Secretary Rene Almendras two days after the storm, the mayor requested “foot soldiers” to make an honest assessment of the damage, especially in sitios (settlements) cut off from the city.

“People were feeling frustrated seeing all these military planes and trucks, and there were dead people, and they were hearing the voices of survivors. And yet there was never and ever any rescue up to today,” he said.

Romualdez said he also took up his request to deploy foot soldiers with the President and Roxas.

“Not only was the security not augmented, the chief of police was also removed,” he said.

The national government, however, eventually deployed 900 members of the Special Action Force to the city, which saw the looting of homes, stores and warehouses days after the storm, the mayor said.

Meantime, the national government sought the immediate passage of an ordinance imposing a citywide curfew to check looting, Romualdez recalled.

He voiced his reservations about this because the prosecutors’ office and courts were still closed to entertain any violator who would post bail. He instead suggested that the police set up checkpoints.

Days later, Romualdez said Roxas called city officials to a meeting and told him: “We have to legalize everything here.”

“I asked him: ‘What is to legalize here?’” the mayor said. “He replied: ‘Well, this is a gray area and the national government is coming in, and doing all this.’”

“And then I told him: ‘Why is it illegal? As far as I know, the President is the President of the Philippines and he’s also the President of Tacloban City. I don’t see anywhere in the law that you need a letter, an ordinance from me for you to come in, and do what you’re doing,’” he said.

He recalled Roxas as telling him: “You have to be very careful because you are a Romualdez, and the President is an Aquino.”

Then the issue that he was being asked to resign came out in the news, a story that the mayor denied.

“I corrected that. I wasn’t being asked to resign. I went to my lawyers that night and communicated with Manila, and said ‘What is the need for this letter stating my functions, that I could no longer function and I could no longer do that?’ I was asking my lawyer, ‘How do I write such a letter?’ My lawyer advised me: ‘Don’t write the letter. You may be deemed as resigning.’ So I didn’t write the letter,” he said, his voice breaking.

Later responding to Biazon’s questions, Romualdez said the national government took over “from the beginning” and decided “which was priority and what should be done.”

There was “very minimal consultation,” he said.

Roxas denied that he told the mayor that he should be careful because he was a Romualdez while the President was an Aquino.

“This was entirely taken out of context. What I told him was that we have to go by the book,” he said.

Trillanes wondered why Roxas demanded such a letter from Romualdez on Nov. 14 even after the President declared a state of calamity.

“There should not be any ambiguity as far as responsibility is concerned,” Trillanes said. “The secretary must clarify the particular issue on why he was asking for that letter from the mayor.”

The senator said that in case of disasters, a local government’s request for additional manpower should be granted.

Biazon then moved that the issue be dealt with in another hearing when the concerned officials would be present.

Without Roxas, NDRRMC Executive Director Eduardo del Rosario provided the other side of the story, saying that PNP personnel landed in Tacloban three days after the storm.

“In 24 hours, we did rapid assessment with additional troops. We conducted damage assessment in the city proper,” Del Rosario said. He said the government deployed personnel and relief.

But he acknowledged that 90 to 95 percent of the population was affected by the supertyphoon.

Earlier in his testimony, Romualdez turned emotional while recalling his helplessness at rescuing his wife, Cristina, and their children, who were trapped in their house, because he was somewhere else when the eye of the storm hit.

That day, he drove to a hotel facing San Pedro Bay to check reports of a low tide. Then he got a call from his wife.

“I was surprised because she was supposed to be in the downtown area, in a building there with my children, secure. But she called me,” he said, breaking down, pausing and taking out a handkerchief.

“She was in our old residence which is near the airport … I was very careful not to scold her because I was afraid she might go to the car and try to go,” he said, his voice trailing off.

“I told her, ‘Brace yourself, secure the kids.’ This is a very powerful typhoon. The winds are blowing so hard. And I said, ‘Stay put.”

Then Romualdez said he got another call. But before he could answer it, the glass in the hotel’s ballroom “exploded.”

“It was so powerful. It became very dark so we couldn’t get out anymore. I was pulled inside. There were about 14 of us, and seven or eight ran out. The door burst open with water just coming from all over. We were forced to go to the ceiling … the whole roof was shaking. We felt waves were pounding on the roof,” he recalled.

When parts of the roof flew off, he said he got a glimpse of the devastation: “There was no more land; everything was water.”

They waited for the water to recede before they walked to the airport where he got reunited with his wife and children.

Romualdez said they had prepared for the supertypoon, recalling that he was evacuating residents from the seaside villages the night before, but they were unaware how strong the storm surges would be.

Meanwhile, a journalist in Tacloban who was one of the victims of the Supertyphoon has accused government aid workers of playing politics in disaster zones.

Eden Reyes, a former broadcaster and now a writer for a community paper, said that government aid workers were selective in handing out relief supplies to survivors.

She said many journalists affected by the disaster got help not from the government but from the National Union of Journalists of the Philippines.

Romualdez: We wanted Aquino’s care but got blamed instead