Romualdez: We wanted Aquino’s care but got blamed instead 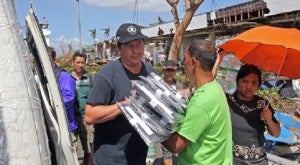 TACLOBAN CITY, Philippines – Mayor Alfred Romualdez has admitted that he is still hurting from President Benigno Aquino III’s “uncalled for statement” that thousands died in the city when Supertyphoon “Yolanda” (Haiyan) struck, because the city simply failed to prepare for the cyclone.

“He made that comment on a Saturday. He came here (Tacloban) on a Sunday. I felt bad, because how can you make a comment when you were not here,” Romualdez said on Wednesday in an interview. Around 5,800 died in Yolanda, roughly half of whom from this city; over 26,000 were injured; and close to 2,000 people are still missing.

He said even in the aftermath of Hurricane Katrina in New Orleans, then US President George Bush did not make such a statement pinning blame on anybody. “Katrina” was touted to be the deadliest of the 2005 Atlantic hurricanes with at least 1,833 deaths; and the costliest in US hurricane history with property losses reaching over $80 billion across several states.

“The better statement would have been Tacloban City was the hardest-hit,” Romualdez said.

He said Aquino’s statement came as a surprise because it was “made without even considering that this was the most powerful typhoon in history to hit.”

He said Aquino should have come to their rescue first to find out if they were all right instead of finding people to blame.

“If your child falls down, you have to embrace him before bringing him to a hospital to make sure he is okay. I think that was (the gesture) that we needed,” Romualdez said.

But even if he was hurt at the President’s statement, Romualdez did not openly criticize the national government’s handling of the crisis in the days following the devastation

“I think it is better for people to pass judgment on that,” he said.

Romualdez said he has been focusing on helping people regain their normal lives.

“According to experts, many of the people here are suffering from shock, because of the (magnitude of the destruction). Your imagination goes wild when you see dead people everywhere,” he said.

Romualdez said Tacloban did not need statements that could not help the victims at all.

“What we need are words of encouragement, words of support and words of caring. That’s all that we need,” he said.

Residents of Quinapondan town in Eastern Samar appeared to be in agreement with Romualdez.

Amid criticisms, he should have brought in more goods to help typhoon victims in the Visayas. Quinapondan residents said they were happy at the sight of boxer-cum-lawmaker Manny Pacquiao.

“Even without the relief goods, seeing him in person and shaking hands with him is already enough to make us happy,” Lita Palines, 70, a Quinapondan resident said.

Pacquiao has admitted the 10 truckloads of relief goods he had ordered transported from General Santos City to typhoon-devastated areas were not enough and could only benefit a few people.

The Philippine Daily Inquirer saw how he handed cash to those who did not receive goods, particularly those who lined up in communities between Guiuan and Tacloban. Pacquiao’s camp did not discuss exactly how much they handed out in cash to the survivors.

Pacquiao pledged to return and bring in more foodstuff.