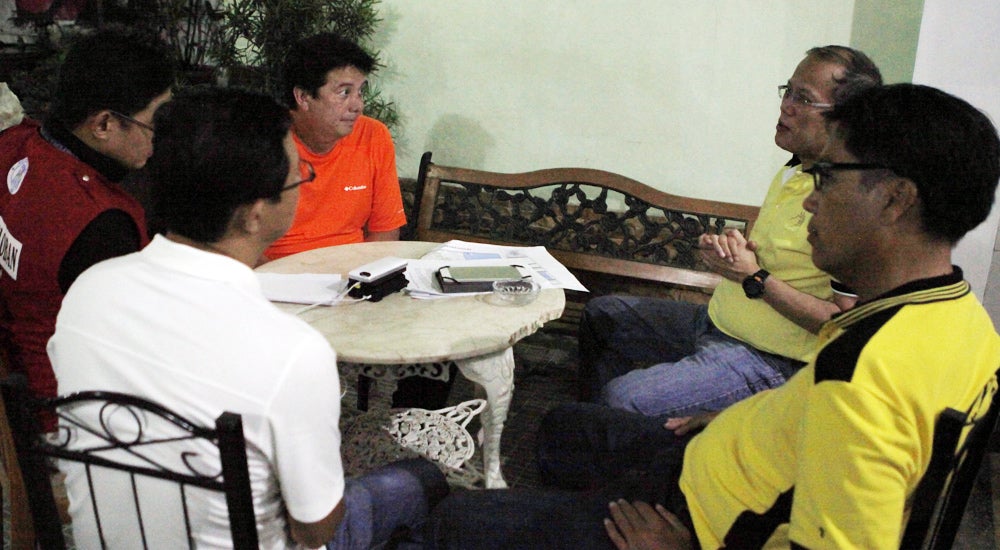 The President sought the meeting with the mayor on Day 9 of the aftermath of Supertyphoon “Yolanda,” ostensibly playing referee between Romualdez and Roxas, who had not been on speaking terms because of disagreements over relief efforts and the interior department’s initiative to take over the devastated city.

Aquino and Romualdez met briefly, with Roxas hardly saying anything.

“We can now coordinate the efforts for relief… and address the issues confronting us,” Romualdez told reporters later. A Romualdez relative said Roxas “did not say much” during what the mayor described as a “brief” meeting.

Asked by the Inquirer if all’s well that ends well, Romualdez said: “We have no problem. But you have to look at it this way—that everything changes every day, so there is nothing permanent in a situation like this.”

He cited the peace and order problem at the outset, when lawless elements had threatened to harass residents, which he said was solved in 48 hours by the Philippine National Police.

Asked about his thoughts on the President personally seeking him out as well as the apparent “disconnect” between him and Roxas, the mayor said:

“In a crisis like this, the best way you can solve this is you have to be on the ground from the beginning.”

Romualdez recalled that a day after Yolanda struck, he was already mobilizing what little resources were left to the city government to rescue survivors and immediately clear the main roads of debris, including the hundreds of corpses.

“It’s hard because I drove the vehicles, heavy equipment. I went to barangays (villages) to know the problems because you don’t have enough resources, so you have to maximize them. That’s the best way to do it so that you get the job done,” he said.

Asked about the “disconnect” between Roxas’ camp and the mayor’s office, he said:

“There’s no problem with coordination between local and national [units]… The local government, we’re using all the resources we can [mobilize], and the national [agencies] also that are here on the ground are also maximizing here the resources they have. If they don’t have resources, we can’t blame them also. Then the national government in Manila should give them more resources.”

He said relief distribution and retrieving bodies were the priorities now. “That continues,” he said.

Asked about relief efforts, he said: “The problem is not the quantity—it’s the distribution. That is the problem not only in Tacloban but in other areas.”

Except in hushed voices, nobody here would want to be quoted on record to explain what caused the apparent rift between Romualdez and Roxas in the immediate aftermath of Yolanda.

Romualdez won a third term opposite Liberal Party candidate Bem Noel, the former An-Waray representative, in the May 2012 polls.

Roxas is the president on-leave of the ruling party but the President and even his sister Kris had campaigned for Noel, a friend of the President.

But observers claim the President personally reaching out to Romualdez shows that Aquino has realized the humanitarian catastrophe engulfing Tacloban and the rest of Eastern Visayas should be spared from politics.

In a separate interview, Leyte Rep. Martin Romualdez said there had been a “disconnect” between City Hall and the Department of the Interior and Local Government.

However, Mayor Romualdez was banking on the President’s public pronouncement that the local government unit should spearhead relief and recovery efforts in times of calamities, with the national government only augmenting local resources.

“But he (Roxas) asked the mayor to relinquish power and authority,” recalled the congressman.

“So the mayor answered that well, [I can do my job] if you give me replenishment of police personnel who, as you know, have been decimated because either “they’re casualties themselves or have been killed, if not, close members of the families have probably died.” Per one account, only 30 police officers turned up on Nov. 9.

The mayor suggested that the Department of National Defense provide Tacloban with a military force “to secure the perimeter because we’ve heard of unverified reports that some lawless elements have been trying to take advantage of the [aid] caravan as far as Samar, and there were rumors of some NPA (New People’s Army) members coming down,” the lawmaker said.

Himself a victim—he and his family barely escaped the storm surge that flooded his seaside residence—he “operated the backhoe himself, digging the mass graves and cleaning the roads,” said the congressman. “The operator was either dead or missing.”

Representative Romualdez denied that local officials in Tacloban were unprepared for Yolanda. “The destruction was so vast that we… everybody was overwhelmed. The national [government] can always rely on the assets of local governments when they arrive in the locality. But as you see, the destruction was so vast that all the personnel were affected, the offices were affected,” he said.

Nobody could have prepared enough for such a superstorm, much less immediately cope with it in the aftermath, he said.

“The resources like vehicles, which are so few, at least at the outset for ready deployment, were taken over by the national government. Everyone needs a service vehicle,” he said.

The brother of Representative Romualdez, businessman Philip Romualdez, rallied the private sector as early as last week to immediately come to the aide of his fellow Leyteños, personally asking several mining companies to send relief supplies, food packs, medical teams, tarpaulins and a water filtration system to the survivors.

The Oxford-educated Philip is the president of the Chamber of Mines of the Philippines and CEO of Benguet Corp.

Many companies, such as Indophil, also provided cash donations.