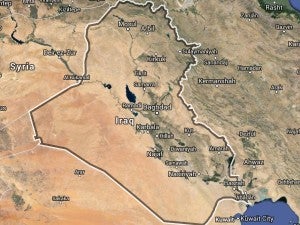 BAGHDAD, Iraq—Authorities in Iraq say a triple bombing at a funeral has killed nine mourners in a town northeast of Baghdad.

Police officials say bombs went off Sunday morning at a gathering of mourners in Wajihiya, 80 kilometers from the capital. The funeral was for a local Sunni tribal sheik’s son who died a day earlier.

Police said that 45 other people were wounded in the attack.

A hospital official confirmed the casualty figures. All officials spoke on condition of anonymity because they were not authorized to speak to media.

Violence has spiked in the last seven months amid escalated political and sectarian tensions in the country.

52 dead in wave of attacks in Iraq