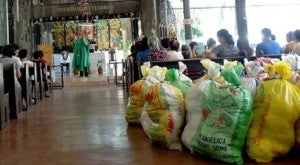 The local government is also looking into a possible “adopt-a-barangay” scheme where all of the city’s 142 barangay (villages) will be tapped to assist their counterparts in the three towns of Sta. Fe, Tolosa, and Palompon, which were adopted by Quezon City.

On orders of Quezon City mayor Herbert Bautista, three teams composed of 100 employees will go to the city-adopted Leyte towns of Sta. Fe, Tolosa, and Palompon, to bring aid to the municipalities from December 14 to December 20.

The teams, led by Elmo San Diego, the action officer of the Quezon City Disaster Risk Reduction Management Council, will provide the three towns with construction materials, equipment, medicine, and other recovery and rehabilitation assistance. Included in equipment that the city government will donate are generator sets, chain saws, folding stretchers, as well as earthquake, landslide and rescue operations tools.

Every family in the towns of Sta. Fe, Tolosa, and Palompon will be given carpentry tools and construction materials to enable them to rebuild their homes.

In a statement, Bautista assured the public that the assistance the city would provide the three municipalities would not be merely short-term. “We intend to help and assist the three adopted municipalities for long term because we know that rehabilitating and rebuilding their communities will not be an easy task,” he said.

Meanwhile, Bautista said that all 142 barangay chairmen may each sponsor a barangay in the towns of Palampon, Tolosa and Sta. Fe, in Leyte to help them rebuild in the aftermath of the monster cyclone Yolanda.

He explained, “The gesture is one way of saying that Quezon City, from local executives down to the barangay level, is one and united in the effort of helping these typhoon-ravaged localities recover from the devastation.”

The mayor said that sponsorship would be determined by raffle and assured Quezon City barangays that no big projects would be required under the scheme, “Only that we take part in their rehabilitation.”

Bautista has also instructed city budget officer Marian Orayani, city planning and development office chief Tomasito Cruz, and city engineer Joselito Cabungcal to review the budget and development plans of Tolosa, Palompon and Sta. Fe to determine what other forms of help Quezon City could give them.