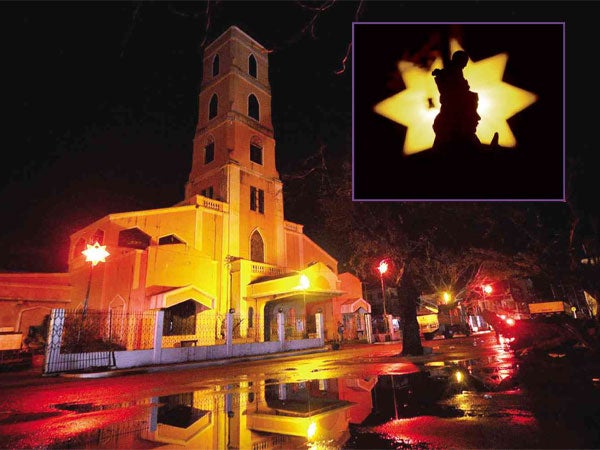 It’s beginning to look a little like Christmas in typhoon-ravaged Tacloban City as simple Christmas lanterns light up the façade of Sto. Niño Parish Church. The profile of the Sto. Niño image is silhouetted against one of the lanterns (inset). Today, the first Sunday of Advent, Catholics start to celebrate the Christmas season. RICHARD REYES

The funding for the “Yolanda Rehabilitation and Recovery Plan” will go to housing, infrastructure, livelihood and employment, local facilities and social services, Communications Secretary Herminio Coloma said in a radio interview on Saturday.

In a separate phone interview, Coloma said the entire P40.9 billion could be fully funded in the 2013 General Appropriations Act and the P14.5-billion supplemental budget passed by the Senate early last week for the reconstruction of the provinces destroyed by Yolanda (international name: “Haiyan”) on Nov. 8.

“We saved for the rainy day because we have managed our national household—the finances of the country—well, so we have the buffer (funds) and the resiliency to make up for these disasters,” Coloma said.

Although now tempered, the continued growth of the economy showed the country’s resiliency in the face of calamities, he said.

The gross domestic product (GDP) grew by 7.4 percent “year to date,” while the deficit was kept at 2.3 percent of GDP, he added.

President Aquino’s decision to scale up the post-disaster budget was reached during a Cabinet meeting on Friday afternoon that lasted well into the night.

At the meeting, Science Secretary Mario Montejo—using a simulation of the storm surge that engulfed coastal cities and towns—said Yolanda devastated 171 municipalities, covering 4,971 villages in an area of 25,000 square kilometers.

The P14.5 billion supplemental budget will be part of the P40.9 billion budget for the first phase of the long-term reconstruction plan of the government, Coloma said.

“The initial estimate of P38.8 billion for critical, immediate actions was revised upward to P40.9 billion after factoring in the verified requirements for local government buildings and facilities, police and fire stations, and public markets,” Coloma said.

The bulk of the rehabilitation fund will go to shelter and public infrastructure and the rest will go to livelihood and employment, local facilities and social services.

According to Coloma, the “revised approximate sectoral allocations” are as follows: shelter and public infrastructure including roads, bridges, airport, port and other facilities (67 percent); livelihood and employment, including support to agriculture and fisheries (12 percent); local facilities (11 percent); social services, including health services, education and training (9 percent).

“These percentages will apply to the P40.9 billion revised estimate,” he said.

But the tab could still go up as “these budget estimates will be subjected to further fine-tuning through on-ground validation of initial rapid assessment findings,” Coloma said.

Asked about the sources of funds for the  plan, Coloma said the P14.5 billion supplemental budget would come from the unspent portion of the Priority Development Assistance Fund (PDAF).

“The supplemental budget is made available because of the abolition of PDAF. Then, we have roughly P16 billion in unused calamity funds from the 2013 budget that have been allocated before Typhoon Yolanda struck,” Coloma said.

The balance of P10.4 billion would come from savings of other departments such as public works, which has outstanding funds for road repairs and maintenance, he said.

Coloma clarified that the P40.9 billion will cover only the “critical immediate actions,” which will last “between now and end of the year, up to the first half of 2014.”

“The total rehabilitation (program)—that’s continuing—perhaps, beyond 2014,” he said, explaining that the total funding for the reconstruction plan would still increase.

“So the expenses for the second phase will be reviewed … and it’s realistic to say that the total budget for the post-Yolanda (period) will be much higher” than the projected P40.9 billion, he said.

The President ordered the Cabinet to ensure that the basic needs of food and shelter of the typhoon survivors are met, Coloma said.

Mr. Aquino said that forward planning must focus on strengthening the capability of the people, institutions and structures to “deal with the challenge of mitigating the impact of similar disasters and abrupt climate change,” Coloma added.

At the Cabinet meeting, the government finally ascertained the extent of the typhoon devastation.

“These are the first-priority areas that, as determined by DOST-Pagasa storm tracking process, are within the 50-kilometer zone from the eye of Typhoon Yolanda as it struck Eastern Visayas and the nearby regions,” Coloma said.

DOST-Pagasa stands for the Department of Science and Technology-Philippine Atmospheric, Geophysical and Astronomical Services Administration.

The typhoon affected 171 municipalities in 14 provinces and six regions.

These areas now comprise what the government calls “first-priority zone.”

Coloma said the DOST was analyzing satellite images to guide the assessment of actual needs.

After establishing the full extent of the typhoon devastation, the government can now focus on identifying livelihood sources for the survivors besides reconstruction efforts, Coloma said.

Within the priority geographical areas, the Cabinet set the following priority aspects of rehabilitation and reconstruction efforts:

Second, reconstructing the economic and social infrastructure  and restoring government and public services.

“This is the menu for action that needs to be taken,” Coloma said.

The Cabinet also tackled the need to continue fine-tuning the budgetary needs of the typhoon-ravaged communities.

“The President emphasized the importance of fine-tuning budget estimates to ensure that every peso is spent wisely, considering the magnitude of government spending not just for post-Yolanda rehabilitation but also for other calamities, including Zamboanga (conflict), Bohol (earthquake) and Central Luzon [which was badly damaged by] Typhoon ‘Santi,’” he said.

Why not soup kitchens instead of food packs?