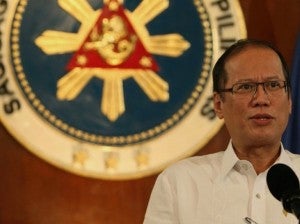 MANILA, Philippines—At the rites marking the 150th birth anniversary of revolutionary hero Andres Bonifacio, President Aquino called on Filipinos from all walks of life to unite to face “one of the country’s hardest trials,” referring to the calamity caused by Supertyphoon Yolanda.

Aquino, in his speech at the Bonifacio Monument in Caloocan City,  said Bonifacio, the founder of the revolutionary secret society Katipunan that sparked the Philippine revolution against Spain in 1896, represented “the ordinary helping Filipino.”

The President said the typhoon, which spawned deadly storm surges that killed thousands, was not only one of the strongest storms in history but also the one that gave the country “one of its hardest trials.”

“If you’ll notice (Bonifacio and the martyr priests Mariano Gómez, José Apolonio Burgos and Jacinto Zamora) represent the ordinary Filipino—barefoot, with rolled-up sleeves and arms dripping in sweat. They were the ones who responded to the call of the motherland to unite and make meaningful changes in the country,” Mr. Aquino said in Filipino.

In our own time, he cited as examples the policemen and the firemen who, he said, “put at risk their own lives to help and save those affected by the recent calamity in the Visayas.

He also lauded the nurses and doctors who “put up their own stalls” to give first aid  and care to the sick, and the volunteers inside and outside the country from the public and private sectors.

He likewise praised those from all walks of life—professionals, uniformed employees and students, as well as ordinary residents—who joined hands and donated time and money to help the calamity victims.

The short program that started a little past 8 a.m. at the Bonifacio Monument attracted hundreds of spectators. A few sat in the plastic chairs that had been arranged around the monument. Many stood outside steel barriers manned by the Presidential Security Group (PSG).

Members of the PSG, who were wearing white, prevented spectators from leaving or entering the enclosed area while Aquino was delivering his speech.

Aquino said that while the country was facing a “difficult test,” many residents answered the call of patriotism.

“This is the real essence of bayanihan. Heroes from any walk of life who unite to show sympathy, conviction and patriotism. We showed this was not just a word or a concept etched in stone. But (it) is really marked in the Filipino identity,” he said.

Bonifacio, he said, symbolized the “courage, perseverance and determination of the ordinary Filipino in facing or hurdling any challenge or obstacle.”

Young Bonifacio, he said, compensated for his lack of economic opportunities by working hard and improving himself. Bonifacio sold goods on the street and had to work to sustain his siblings, he said.

He learned how to read and write, wrote poetry, became a member of Jose Rizal’s La Liga Filipina and founded the Katipunan, Mr. Aquino added.

“He rallied his countrymen since he knew that alone he would not be able to defeat the strong army of the Spaniards.”

“What he knew was that his fellow countrymen were there, and were ready to fight to end slavery and to attain their long-desired freedom,” he said.

The ordinary Filipino, he said, went through the “blood compact” like Bonifacio did and became the “chosen children of the country.”

“Their unity was not according to region, color of the skin or the shape of their noses, but according to their common dedication to promote a country with dignity, peace and progress.”

Mr. Aquino added that Bonifacio’s message to the Filipinos was that in the face of any threat, there’s always hope.

Bonifacio only asked for Filipinos to “continue the fight,” the President said.

“We need not wait for another problem or calamity before we act and unite,” he said.
RELATED STORIES: